Whether or not you’re in the market for a new mattress, you’ve probably heard of Casper. One of the first bed-in-a-box mattress companies to gain popularity, Casper offers award-winning foam mattresses and hybrid mattresses — and it’s just added a special so-called “Cooling Collection” to its lineup.

As any hot sleeper knows, temperature can really make or break a good night’s sleep. Whether you’re having hot flashes, just run a little hot or take a medication that makes you overheat, it’s a challenge to sleep well when you keep waking up hot and sweaty.

“It is normal for our body temperature to ebb and flow over the course of the night, rising and falling as we enter and reenter each stage of sleep,” explains Dr. Rebecca Robbins, sleep scientist at Brigham & Women’s Hospital and instructor in medicine at Harvard Medical School.

“We recommend a thermal neutral zone where you are neither too warm nor too cold, but erring slightly on the side of being a bit cooler is best (for most, this is approximately 68 degrees Fahrenheit),” says Robbins. “Reflect on the last time you bought your mattress. If it has been over eight years, you should be in the market for a new mattress, as your old one may be stuffy, have poor airflow and increase your body temperature during sleep.” 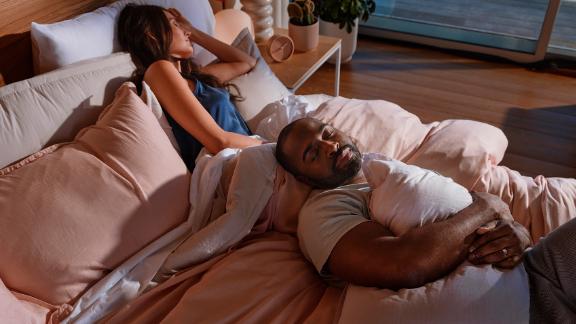 Casper’s product design team explained that the launch of the Cooling Collection was in response to customer demand, saying, “Our research found that temperature is one of the key factors that keep people from getting a good night’s sleep. Sixty-seven percent of people surveyed reported waking several times a month due to temperature issues, and 60% found their cooling solutions for sleep ineffective to moderately effective.”

To see if this cooling collection — and new mattress — really stands up to the hype, we tested it out ourselves.

There are two different cooling mattresses in this collection: the Wave Hybrid Snow and the Nova Hybrid Snow. For those who like a smooshier, cushier mattress you can really sink into, the Nova is recommended. Meanwhile, the Wave, which is what we tested, has a bit more firm support.

The Wave Hybrid Snow Mattress arrived on my front porch in a box about the height of my shoulder (about 4 feet), and it was not lightweight. If you’ve ordered a mattress in a box directly shipped to your home you may be familiar with the heft of an entire mattress packed into a box about a quarter of its size. The bulk was impressive. 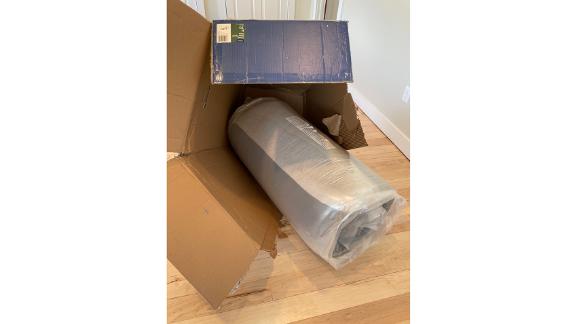 The Casper Snow Wave Hybrid mattress right out of the box

After using two people to lug the box up a flight of stairs to our bedroom, I opened the box and saw the mattress nestled inside like a cinnamon roll, bursting with comfort. Now working alone, I cut the box off the tightly wrapped mattress and took a look at the directions. They said to cut off the outer layer first and then unroll the mattress, which was pretty simple and easy to do. I then cut off the inner layer of plastic while the mattress lay flat on my bed frame.

I then waited to see how quickly it would “inflate,” as it was air-packed in the box and quite flat initially. I’d heard box mattresses could take a day to come to life, but the Wave Hybrid was ready for use within two hours. 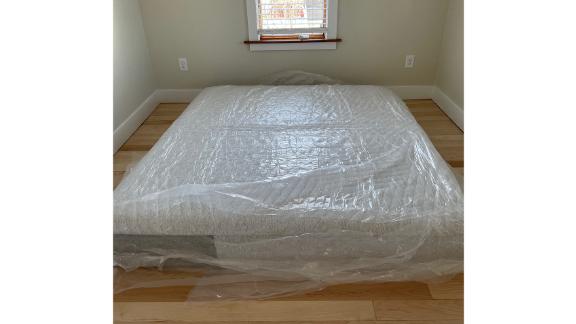 This is where the real testing came in. Did this cooling mattress feel any different from a traditional hybrid mattress? The answer: yes.

Tired after a long day of moving into a new house, we flopped on the mattress before making it up with sheets. It felt noticeably cool to the touch. It was actually startling. Unfortunately, I also noticed it smelled a bit like the plastic bags it was delivered in, but that quickly drifted away. 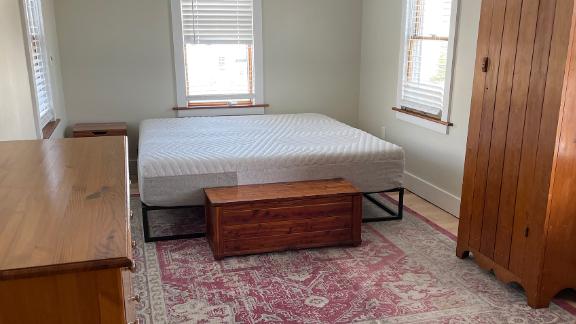 The Casper mattress set up at home

But how exactly does it feel so cool? According to Casper’s product design team, “the Snow Mattresses are infused with phase change material (PCM), which has a melt point between room temperature and body temperature. When your body touches the mattress cover, your body heat warms the PCM, which absorbs large amounts of latent heat during the process of melting.”

That night after making up the mattress with a set of Brooklinen Classic Percale sheets, we tucked into bed and, yup, it was still cool — it sort of feels like lying down on a cool piece of gel. The mattress enveloped my body like a hug but was solid as well. No matter what side of my body I was lying on -— side, back or front — I felt supported and, more importantly, so cool. 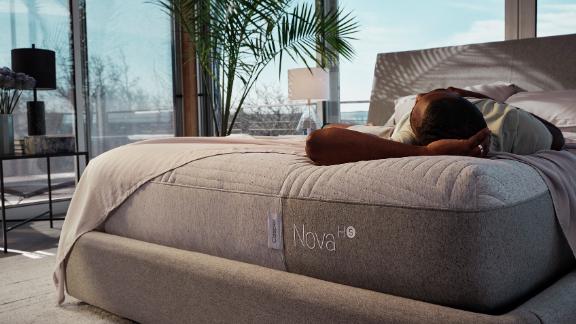 My husband echoed my sentiments about the comfort, telling me, “I like how when you get in bed it’s really soft, but at its base, it’s really firm.”

We both got an amazing night’s sleep and didn’t wake up hot at all. By the first morning, the weird plastic smell had faded (or I’d gotten used to it).

A few nights later I switched out the sheets for a 100% cotton set, and we had the same experience. One night I was a bit warmer but not sticky or sweaty, but it was also a particularly warm, humid night.

Casper also sent its Lightweight Humidity-Fighting Duvet, which is also part of the Cooling Collection. After a few nights, I was sold. Living in a coastal area like I do means humidity is a part of life. But on cool spring nights, getting the balance of warm but not overheated can be tough. This duvet, which is lightweight as promised, absorbs moisture to leave you feeling cool and comfy. 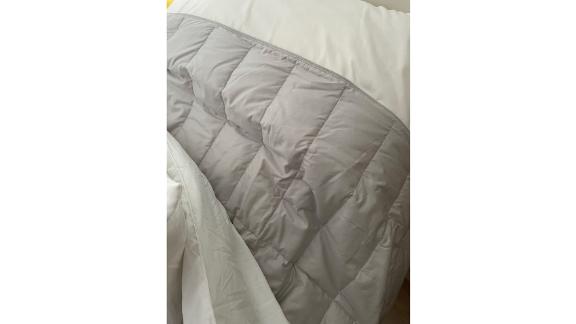 The Casper product design team told me, “Our humidity-fighting duvet incorporates a thin layer of merino wool, which naturally absorbs moisture to reduce humidity under the cover.”

The look of the duvet is similar to Casper’s other duvets and blankets — utilitarian. If you’re looking for design flair, you’ll want to add a duvet cover.

The mattress continued to stay cool over the week we tested it out, but it never felt cold on chilly spring nights. I also never once felt stuffy or sweaty, so clearly I know I won’t have to use Casper’s risk-free 100-day trial. 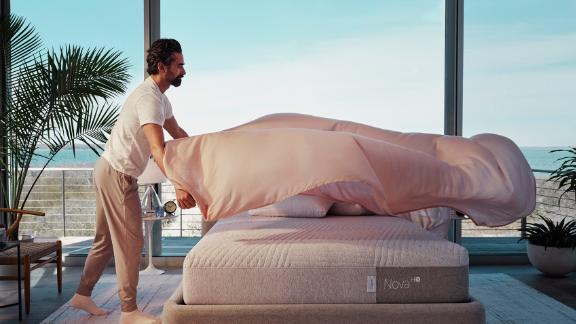 Prior to the launch of the collection, I was able to test the Wave Hybrid Snow Mattress at home for over a week, with weigh-ins from my husband, who also sleeps hot. The testing process was comprehensive and relaxing — who doesn’t want to take a midday nap for work? But I really wanted to get to the heart of what makes this mattress so different, and what the value was for someone looking for a cooling mattress. 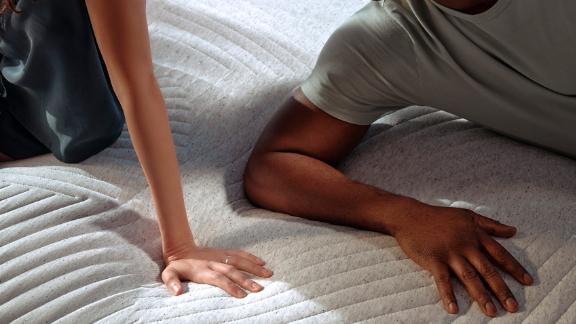 Both the mattress (definitely a keeper, scoring 92 out of 100 points) and the humidity-fighting duvet are among my favorite home additions in 2021 so far. For hot sleepers, anyone living with a hot sleeper or those living in a warm, humid climate, the Cooling Collection offers a respite from stuffy, hot nights and should give you many blissful nights of deep rest and cool sleep.