Roku’s streaming devices and sound products have consistently found their way into our “best of” roundups as one of the top picks. Just look at the No. 1 spot in our best soundbars of 2021, where the Roku Smart Soundbar currently sits on the throne. Then there’s our best streaming sticks and devices of 2021 guide — and wouldn’t you know it, the Roku Ultra has top honors there. It’s a similar story with best TVs as well, with the TCL 5-Series Roku TV as the overall pick.

And for that reason, we’re excited to see Roku introduce three new devices and a significant software update that improves its current product line. More specifically, Roku just announced the $29 Voice Remote Pro, $39 Express 4K+ and $179 Streambar Pro. You can buy the Voice Remote Pro right now, while the Express 4K+ and Streambar Pro are available for preorder, with deliveries starting next month. And alongside new hardware, Roku is prepping OS 10, which will arrive to a number of current-gen devices.

What’s special about the new hardware and software? Glad you asked. Let’s take a closer look.

An upgraded remote might not seem like the biggest improvement, but Roku is taking its offering a step further with the Voice Remote Pro. And yes, it keeps a headphone jack for private listening.

Launching Tuesday, April 13, the $29.99 Voice Remote Pro has all the features Roku users have come to love and expect, but it now features a rechargeable battery. Previously, Roku remotes used either AA or AAA batteries that you’d replace every few months.

It’s not just more environmentally friendly; the battery inside should last around two months, according to Roku. Once the battery is low, you’ll use a Micro USB cable to recharge it. Interestingly enough, Roku didn’t opt for a solar panel array on the back like Samsung is doing with its remotes for select 2021 TVs.

Additionally, Roku added a midfield microphone to enable hands-free voice interaction with the remote from across the room. For example, you’ll be able to say, “Hey Roku, find my remote” if you’ve once again misplaced it. This will trigger a beeping sound from the remote itself. (Admit it: Losing a remote happens far too often and causes heaps of undue stress.)

There’s a physical switch on the remote to disable the always-on microphone for those privacy-minded users who don’t want it always listening. You can still use voice commands on demand with the press of a button.

All of the staple Roku remote features are still there. You get a headphone jack for private listening (helpful when your partner is sleeping but you just have to keep bingeing) and the programmable shortcut buttons for your favorite apps — not to mention it will work with all Roku players and TVs.

The Voice Remote Pro is available to order right now from Roku.com and will be in retail stores in May. 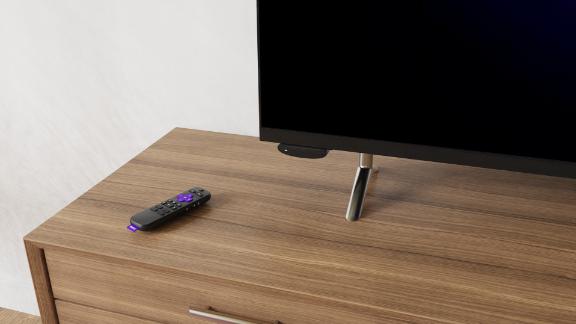 Roku’s Express products are known for providing a lot of value as entry-level streaming devices. The Express 4K+ is Roku’s latest device that fits the familiar mold. It’s available to preorder right now, with deliveries starting in late May.

At $39.99, the Express 4K+ will have a lot to offer. The experience starts with a 4K HDR picture that supports standards like HDR10 and HDR10+. Your TV will need to support those to take advantage of it, and similarly, if you have a 1080p HD TV, the Express 4K will stream content at that resolution. Furthermore, there’s dual-band Wi-Fi support, and you’ll have the ability to use the Micro USB port to connect to an Ethernet cable with a compatible adapter. Either route should be a more stable connection, which means less buffering.

The Express 4K+ uses a quad-core processor, which should boost performance over the Roku Premier, the device that it’s replacing in Roku’s lineup. You’ll get Roku’s Voice Remote that allows you to control your TV and the Express 4K+ from a single remote. Super handy, especially with volume controls built in. This streamer also supports Amazon’s Alexa, the Google Assistant and Apple’s AirPlay 2/HomeKit platforms out of the box.

The Express 4K+ stacks up nicely against the $49.99 Amazon Fire TV Stick 4K, with the same broad support for content and an Ethernet connection, and it’s $10 cheaper. At this price point, don’t expect the overall performance to blow you away, but it’s more than capable of streaming your favorite shows without skipping a moment.

The $39.99 Express 4K+ is available for preorder right now, with deliveries starting in May alongside retail availability. 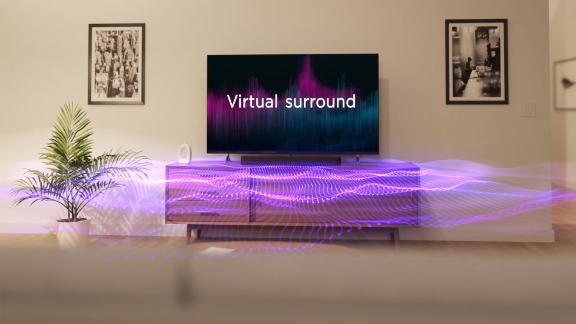 Roku’s Smart Soundbar is currently our top pick for the best soundbar of 2021, and the new Streambar Pro will be its successor. Safe to say, we have high hopes for it. You might be asking, why the name change? Well, Roku is (thankfully) streamlining the naming scheme it uses with its products. The company introduced the smaller Streambar last year, and the Smart Soundbar is now Streambar Pro. It’s technically the second-generation Smart Soundbar as well.

The Streambar Pro sits at the same attractive $179.99 price and includes a nearly identical feature set to that of the original Smart Soundbar. Tucked inside the 32-inch housing you’ll find four 2.5-inch full-range drivers, which combine for full and robust sound.

Most importantly, it’s a combination soundbar and streaming box. You’ll just plug in the Streambar Pro and use it as you would any other Roku streaming device. The speed on the Smart Soundbar was similar to that of the Ultra, and we expect that to remain the same here.

The Streambar Pro comes with a voice remote and a pair of headphones for private listening when you use the remote’s 3.5-millimeter headphone jack. It’ll include OS 10’s new virtual surround feature that aims to trick your ears into thinking you’re hearing a full 5.1 surround sound system coming out of the soundbar (more on that in a minute).

The Streambar Pro is available to preorder right now for $179.99, with deliveries expected to begin in May alongside retail availability. 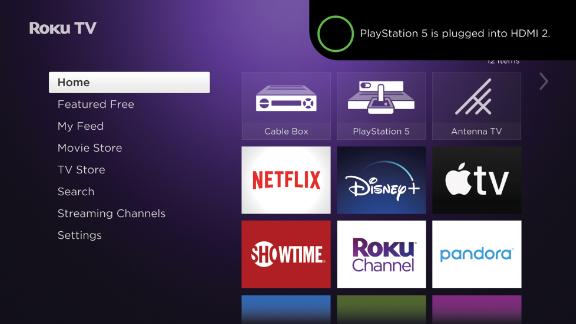 Roku OS 10 is rolling out to eligible Roku devices.

Roku is starting to roll out its OS 10 software update to its entire lineup, and it brings several new features. It starts with the expansion of Apple’s AirPlay 2 and HomeKit platforms to Roku’s HD streaming devices. Previously, both features were available only on 4K Roku devices.

With AirPlay 2 and HomeKit support, Roku owners can stream music or videos from their Apple devices to a Roku device, or use the HomeKit functionality to give Siri commands to control the Roku device.

Another notable feature included in OS 10 is Instant Resume. Thanks to this feature, you’ll be able to get back to what you were last watching at the exact moment you stopped watching it, even after you’ve closed out of the app. At launch, there will be at least 15 supported services, including Starz, AT&T TV, FilmRise and Fox Business Network. More services will be added over time.

Additional features coming in OS 10 include customizing the live TV channel guide, automatic network detection for improved connectivity and game console configuration for Roku TV owners. The latter feature will detect what type of game console is connected to the TV and enable Game Mode, with low latency performance, HDR gaming, variable refresh rate and THX Certified gaming mode as long as your Roku TV supports it. It’s an easy way to get the best experience on-screen from your console.

HDR10+ support is also included in OS 10 and will work with Roku Ultra 2020, Roku Express 4K and Roku Express 4K+. This visual standard for content helps to make colors pop and visuals as a whole feel more immersive. Virtual surround sound is making its debut on Roku products, mimicking a full surround sound system via software optimization. Virtual surround will be available on the Roku Smart Soundbar and Streambar Pro at launch. We’ll be going hands-on soon and will report back on this new feature. As with most Roku features, you won’t need to keep it enabled if you don’t find it useful.

Roku OS 10 is already in the process of rolling out to Roku devices, but wider availability will take place over the coming weeks.