Stocks got back on the horse on Wednesday, with both the Dow and S&P 500 indexes finishing at their second-highest levels ever, as investors continue to smile on strong economic growth prospects.

Strategists at Goldman Sachs are bullish on the U.S. economy, expecting sequential annualized U.S. gross domestic product growth to clock in at 10.5% in the second quarter of 2021. That would be the strongest quarterly growth rate since 1978 (outside of the surge in mid-late 2020, when the economy rebounded from a sudden halt).

But it may not be good for stocks. Our call of the day is from the team at Goldman Sachs, led by Ben Snider, who warns that as economic growth peaks, investors should expect lower equity returns and higher volatility.

Economists at the investment bank see U.S. GDP growth slowing modestly in the third quarter of this year before continuing to decline across the next several quarters.

“Decelerating growth is usually associated with weaker, but still positive, equity returns and higher volatility,” the strategists say. Since 1980, the S&P 500
SPX,
-0.00%
has seen average monthly returns of 1.2% when economic growth was positive and accelerating, but just 0.6% when growth was positive but decelerating.

In fact, stocks underperform just when growth peaks. Investors who bought the S&P 500 when the Institute for Supply Management manufacturing index was above 60 — signaling peak growth, the strategists say — saw median returns of -1% in the next month and just 3% over the following year. In March, the ISM manufacturing index clocked in at 65.

But it isn’t all bad news. Outside of the U.S., the global economy is still on a tear. Economists at Goldman Sachs expect economic growth in Europe, Japan, and emerging markets outside of China to peak later than in the U.S. — in the third quarter of this year. “As a result, some cyclical parts of the U.S. equity market should fare better in coming months than they typically do when U.S. growth begins to slow,” the strategists say.

Cash call at Credit Suisse: The bank will raise 1.7 billion Swiss francs ($1.9 billion) in additional capital in the wake of the meltdown of hedge fund Archegos Capital. Credit Suisse
CS,
-2.84%
said it would lose another $654 million from the fire sale that saw the liquidation of positions approaching $30 billion in value in March, after an initial $4.7 billion hit.

On the economic front, initial jobless claims for last week came in at 547,000, a pandemic low, while there were 3.67 million continuing jobless claims in the week of April 10. U.S. existing home sales dipped in March while the index of leading economic indicators rose last month.

Europe is headed for the world’s first major laws on artificial intelligence. The European Commission — the executive branch of the European Union — on Wednesday proposed limiting the police use of facial recognition and banning certain kinds of AI systems.

On Wednesday, representatives from technology giant Apple
AAPL,
+0.25%
and Google parent Alphabet
GOOGL,
+0.14%
got grilled by the Senate Judiciary Subcommittee on Competition Policy, Antitrust, and Consumer Rights over the wide-ranging powers of the App Store and Google Play Store.

In India, COVID-19 is coming back with a vengeance. The world’s second-most populous country reported a record of more than 314,000 new infections on Thursday as the country’s healthcare system teeters on the brink.

COMP,
+0.18%
after Wall Street got back to its winning ways on Wednesday.

PX1,
+0.89%
rose on Thursday amid a wave of strong earnings reports, but it was Tokyo that led the way higher among Asian stocks
HSI,
+0.47% 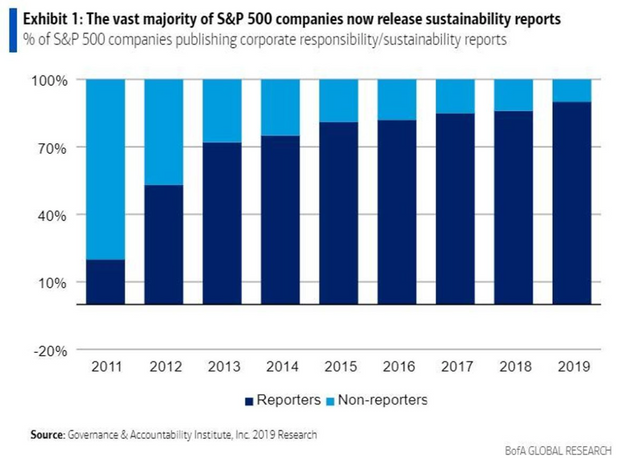 Chart via Bank of America

Our chart of the day shows the rise of sustainability reports among S&P 500 companies. In honor of Earth Day, read more about what that means and check out six other charts showing the “greening” of the S&P 500. 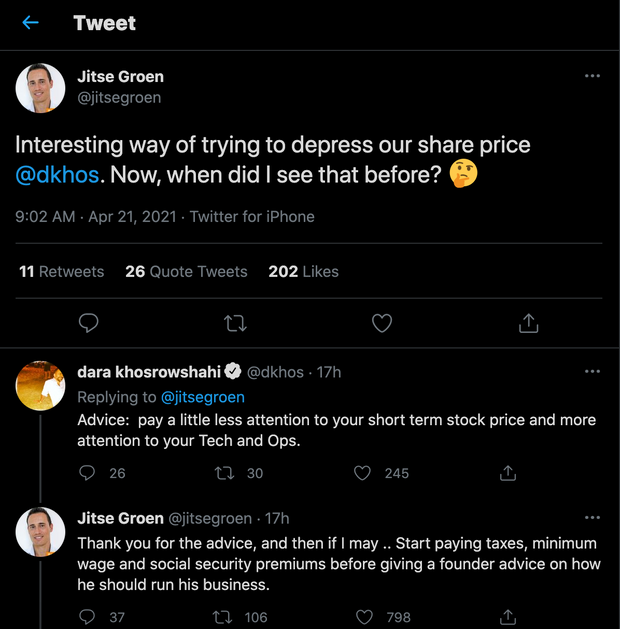 After the Financial Times first reported on Wednesday that Uber Eats
UBER,
+0.61%
would expand into Germany, shares in rival Just Eat Takeaway
TKWY,
+1.04%

JET,
+1.71%
(JET) slumped more than 4%. That spurred a bizarre exchange between the chief executives at the two companies, started by JET’s leader, Dutch billionaire Jitse Groen.

Tra-la-la: A $13,000 flute that went missing nearly a decade ago in a taxi has been returned to its owner after police recovered it from a Boston music store.