When Yuliy Mamchur, a Ukrainian air force colonel, tried to fend off a Russian attack on his base on the Crimean peninsula in 2014, his troops were hardly equipped for their mission.

“We stood for a month surrounded by well-armed elite troops. We had only pistols and three machine guns to defend the air base,” Mamchur recalled.

The pitiful state of Ukraine’s military was exposed seven years ago when Russia seized the peninsula and later stirred up a separatist war in Donbas, eastern Ukraine.

Troops lacked flak jackets and wore old Soviet helmets incapable of stopping bullets. Tanks and many armoured vehicles failed to operate due to missing parts and shortages of fuel.

With Russia once again threatening war, having amassed about 110,000 personnel along the eastern border of Ukraine and on the occupied Crimean peninsula, Kyiv now has a larger, more professional military with battle experience to offer resistance to, if not defeat, Russian forces.

“We have been preparing for the enemy’s offensive since 2014,” Arsen Avakov, Ukraine’s interior minister, said this week as he inspected the well-funded National Guard.

“And I want the aggressor to understand that the attack on Ukraine will not be an easy walk, it will be a huge loss for anyone who decides to enter our land without our consent.” Russia’s military intentions are hard to fathom. But analysts, Ukrainian and western officials say Kyiv’s stronger armed forces would increase the military cost to Russia of an incursion or invasion, which President Vladimir Putin would have to factor in when weighing any escalation.

Public support for a Russian offensive would be a concern for the Kremlin, a European diplomat said, pointing out that while Russians backed the annexation of Crimea they feel less attached to the Donbas.

In the years leading up to Moscow’s 2014 aggression, Ukraine’s armed forces had been starved of resources by a pro-Kremlin president, Viktor Yanukovich. But defence spending doubled to 3.4 per cent of gross domestic product in 2019, from 1.6 per cent in 2013, according to the Stockholm International Peace Research Institute. Troop numbers have expanded.

Oleksandr Danylyuk, former adviser to Ukraine’s defence minister in 2014 and now at the Kyiv-based Center for Defense Reform, estimates Ukraine has about 250,000 active servicemen (the International Institute for Strategic Studies estimates 209,000) and 1m reservists, 250,000 of which have combat experience, compared with just 60,000 battle-ready soldiers in 2014. 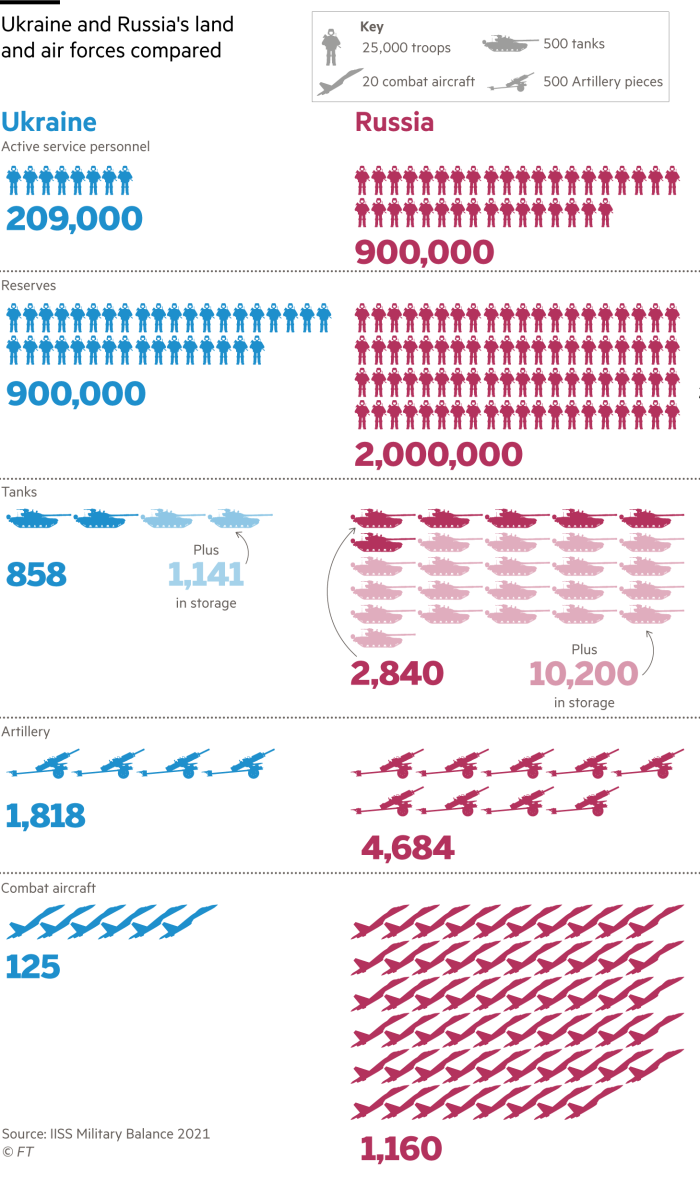 Ukraine’s army has evolved from a core of trained soldiers supplemented by volunteer battalions to a more professional corps, hardened by years of fighting.

Oana Lungescu, Nato’s spokesperson, said Ukraine’s security and defence sector had “come a long way” over the past seven years, and emphasised progress in areas such as defence planning and military education.

Allies including the US, Canada, UK, and Lithuania have provided training for Ukrainian forces, while Nato has focused on strengthening command and control capabilities and improving communications.

“In 2014 Ukraine was caught off-guard, the military was poorly trained, poorly equipped, and there was a high level of corruption,” said Yohann Michel, a defence analyst at the IISS. “One of the most important effects [of training] is on morale. Anything you can do to make troops feel more professional will result in them operating more professionally.”

These efforts fit Kyiv’s wider plan to meet Nato standards, with the aim of eventually joining the alliance.

“The improvements are about modernisation and professionalisation of the armed forces, but it’s also about their objective of becoming closer to Nato,” said Sarah Lain, a Ukraine researcher at the Royal United Services Institute.

Kyiv has also invested in hardware. Soviet-era tanks and artillery have been refurbished. New precision weapons have been developed or obtained from the west, including more than 300 Javelin anti-tank missiles from the US. Rocket systems have been upgraded. 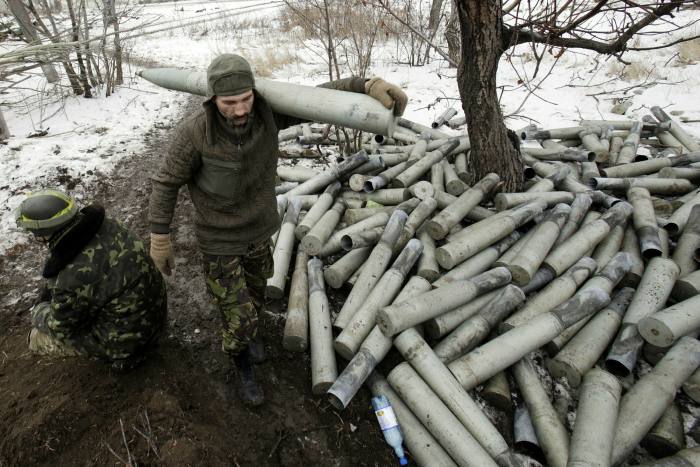 Two years ago, Ukraine acquired six Bayraktar TB2 drones from Turkey, as used by Azerbaijan to secure victory against Armenia in last year’s Nagorno-Karabakh conflict. Ukraine is in talks with Turkey on purchasing an additional 48.

Using drones for reconnaissance and in a limited strike capability is one way for Kyiv to overcome its ageing aircraft fleet’s deficiencies, but Michel of the IISS warned that the Russians will be ready with jamming technology and anti-drone defences.

“Like the Javelin, those drones will not change the overall balance of the conflict and will probably not overwhelm Russia,” he said.

Kyiv also lacks comprehensive anti-drone and anti-aircraft capabilities, and has not so far persuaded the US to help fill this gap by providing Patriot missile systems.

Dmytro Kuleba, Ukrainian foreign minister, said he had relayed “some specific needs” for the Ukrainian military to Washington but the US response would depend on Russia’s actions.

However, western allies including the US and UK provide vital surveillance functions and, since Moscow’s troop build-up last month, have intensified spy plane deployments over the areas occupied by Russian forces.

“It provides reassurance and intelligence to the Ukrainians, and also sends a signal to Moscow, that we know where you are and what you’re doing,” said one western defence official.

James Sherr, a senior fellow of the Estonian Foreign Policy Institute at the International Centre for Defence and Security, cautioned that even obtaining state of the art equipment would not address the main weaknesses of Ukraine’s defence as it confronts “one of the world’s masters in modern, highly mobile combined arms-and-manoeuvre warfare.”

“Ukraine’s forces are neither trained for that and have not been given the resources for that,” he said.

Danylyuk said Russia has the military might to “unleash massive aggression” and could capture territory to allow it to re-establish water supplies to the Crimean peninsula — thought to be one of Moscow’s possible objectives. “But are they ready to pay the price for it?”

“This will not be an easy stroll for Russia this time . . . There will be tens of thousands of casualties,” said Mamchur, who is in Ukraine’s reserve forces — and stands ready to serve again.