European regulators are examining whether Binance, one of the world’s biggest cryptocurrency exchanges, has complied with securities rules over its launch of trading in stock tokens.

In a new initiative that started last week, Binance says it allows users outside the US, China and Turkey to “trade equity shares through crypto coins”, with tokens that “represent a share in a stock corporation”. The move marked one of the most significant forays by a leading digital currency venue in to a specialised and heavily regulated market.

Changpeng Zhao, Binance’s chief executive, said that when the tokens launched they “demonstrate how we can democratise value transfer more seamlessly, reduce friction and costs to accessibility, without compromising on compliance or security”.

But regulators are seeking to determine whether the tokens comply with rules governing transparency and corporate disclosures.

The UK’s Financial Conduct Authority said in a statement to the Financial Times that it is “working with the firm to understand the product, the regulations that may apply to it and how it is marketed”. It added that “firms and their senior management teams are responsible for determining whether their products and services fall within the remit of the FCA”.

German watchdog BaFin declined to comment on any potential inquiry into the stock token platform.

“We cannot comment on the specific case due to confidentiality obligations,” the regulator said. “Fundamentally, however, the following applies: if tokens are transferable, can be traded at a crypto exchange and are equipped with economic entitlements like dividends or cash settlements, they represent securities and are subject to the obligation to publish a prospectus.”

Binance told the Financial Times that the stock tokens are a CM-Equity product that is compliant with the EU’s Mifid II markets rules and BaFin’s banking regulations. CM-Equity is a regulated Munich-based investment group that processes the token trades.

“Currently users only buy and sell the tokens from and to CM-Equity AG, which does not require a prospectus,” Binance said.

The Binance tokens are designed to track the share performance of companies they represent, but cost only a fraction of the price of the stock. Investors can trade tokens on Binance that shadow the price of two stocks: US-listed electric carmaker Tesla and rival crypto exchange Coinbase. Deals are backed by a “portfolio of underlying securities”.

Binance says users are also entitled to the “economic returns” of owning the shares, including potential dividends.

Its just over one-page service agreement, and key risk documents for investors, indicate that CM-Equity is responsible for handling the services like custody for acquired shares, as well as compliance and know-your-customer checks. 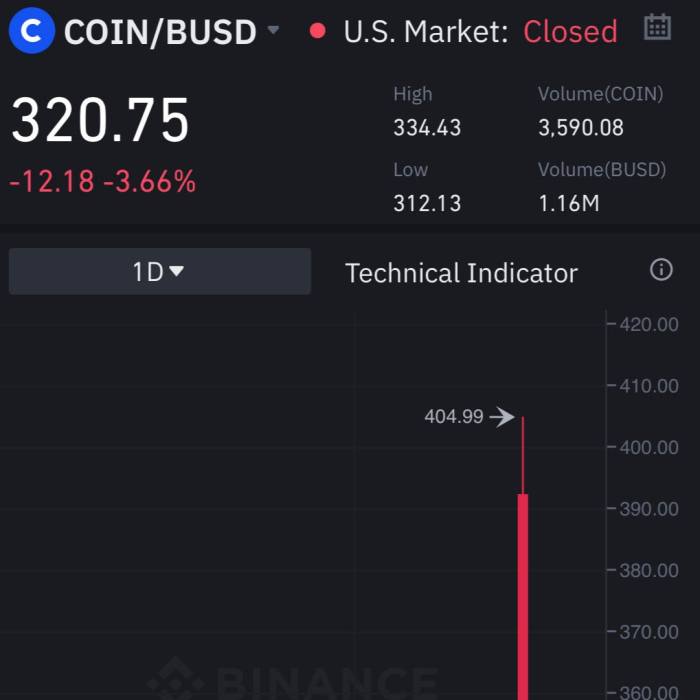 The exchange lets users trade Coinbase and Tesla tokens, with each unit representing ‘a share in a stock corporation’

But the exchange does not provide a formal investment prospectus that would be required if it were deemed the stock tokens constituted “securities” under European regulations. CM-Equity said the product was Mifid II compliant and worked as a certificate for a total return swap.

A prospectus was not necessary as the tokens were not transferable to other customers, it added, and are typically settled in Binance’s own cryptocurrency, rather than cash. The tokens do not confer the same voting rights that holders of an equity would receive, Binance said.

Lawyers say the regulatory status around the tokens is a grey area since Binance does not make clear on its website whether it is a security or a derivative. “Taken together with the information from Binance, it’s simply not consistent,” said Thomas Tüllmann, a partner at law firm Eversheds Sutherland in Hamburg. “If I was BaFin, I’d write immediately to them and ask where the prospectus is.”

German regulators have been open to developments in digital currency and equities markets, allowing exchange-traded products that track cryptocurrencies like Bitcoin on to Deutsche Börse.

Zhao said in a recent interview with Bloomberg that the group is “very regulated”. It does not have a formal headquarters, but rather it has a “large number of regulated entities in multiple jurisdictions that we operate”.

Binance claims to be the world’s biggest crypto exchange by volume, with around $47bn worth of coins trading on its platform in the 24 hours to Wednesday afternoon, according to CoinMarketCap.com. That easily exceeded the turnover recorded by US-based Coinbase, which listed last week on Wall Street.

It recently named former US senator Max Baucus as an “as adviser to Binance overseeing government relations and regulatory initiatives.”

The group also announced on Tuesday that it hired Brian Brooks, a former official at the Office of the Comptroller of the Currency during the Trump administration, as chief executive of its American affiliate, Binance.US.