On the surface, Liberty Commodities is the $6bn metals trading operation where Sanjeev Gupta made his fortune.

While the 49-year-old Gupta would later reinvent himself as a captain of industry and is now a man fighting to save his teetering empire, it was Liberty Commodities, which he founded in 1992 and still owns, that fuelled his rise.

The company advertises itself as “one of the leading independent non-ferrous traders”, doing business with “major producers” and acting as “one of the pioneers in finance solutions for the industry”, boasting annual turnover of more than $6bn.

But under the skin, there are some unsettling details about Liberty. The company has borrowed heavily from Greensill Capital, the now-collapsed finance firm advised by former UK prime minister David Cameron, on the basis of invoices, some of which appear to be dubious.

The Financial Times revealed this month that some of the companies named on the paperwork deny doing business with Liberty, raising suspicions of fraud. Gupta said he refuted “any suggestion of wrongdoing”.

Now the FT has analysed an internal ledger from March 2018, which captures more than $1.5bn worth of transactions. It shows that the majority of Liberty Commodities’ outstanding receivables were from closely connected companies, including those owned by former or current employees, trusted business partners and friends.

When combined with bills owed by businesses Gupta and his father owned, the FT has been able to attribute at least three-quarters of the stack of unpaid invoices Liberty Commodities was sitting on that month to entities with ties to the steel magnate.

Greensill Capital, which had built up $5bn of debt exposure to Gupta’s businesses by the time of its collapse last month, regularly financed these sorts of trades.

Most large financial institutions have policies to prevent them from providing funding against invoices between “related parties”, because they are more prone to misrepresentation and malpractice.

Related-party trades were at the centre of several high-profile commodities trading blow-ups last year, such as the collapse of Singaporean oil trader Hin Leong.

Closely connected entities sometimes buy and sell goods between themselves to boost revenue. This can be done purely to generate an invoice that can be financed from an unsuspecting lender.

The new information on the Liberty Commodities invoices adds to questions over the business practices of Gupta’s GFG Alliance conglomerate, which includes Liberty and a collection of steelworks and other metal plants that employ 35,000 people around the world.

Officials at German regulator BaFin said they shut down Greensill’s Bremen-based bank last month after it “was unable to provide evidence of the existence of receivables in its balance sheet that it had purchased from the GFG Alliance Group”.

Regulators in the UK also forced Gupta’s UK-based bank Wyelands to return depositors’ money last month after an investigation by the FT found that much of the bank’s lending financed GFG companies.

In a statement, GFG told the FT that it had “always been clear” that different parts of the group “trade with each other on commercial terms”.

“While GFG companies have done business with people known to the founder including former employees, the company has long-term customer relationships with major infrastructure, industrial, aerospace and automotive customers — as you would expect from one of the world’s largest steel producers and the operator of Europe’s largest aluminium smelter.”

In a podcast aimed at employees last month, Gupta sought to alleviate fears about his group, which has been stricken since the collapse of its main financial backer Greensill. He also offered a breezy rejoinder to scrutiny of his outsized dealings with connected companies.

“Doing business with friends, actually, is the safest form of business, in my experience,” he said, speaking from Dubai.

Some of that business is unusually close, however, even for an industry where cosy relationships are common. And it does not always seem perfectly safe.

In October 2019, the chief executive of Liberty Commodities, Paul Francis, emailed his finance director requesting an update on the audit of a company called Inventia Trading Group and copying in Gupta, his boss.

Inventia was ostensibly an entirely separate company owned by an Indian businessman Kashif Khan, who was also copied in on the email seen by the FT.

But Francis treated it as if he controlled it: “When do you think we can process this audit?” he wrote. He urged speed — “we need to fast track this one to the maximum extent possible” — and said that “we need to discuss . . . the role of this company now and how we can make good use of it going forward”.

In its first year of operation, Inventia had borrowed millions of pounds from Gupta’s British bank Wyelands — named after his Welsh country estate — in order to buy a hydroelectric plant from the steel magnate’s father, Parduman, before flipping it and repaying the loan nine months later.

While Inventia booked more than $200m of annual revenue, the company has little to no online presence, is registered to a post office box in London and is audited by a tiny accounting firm called King & King. It reported only $75,625 of net profit in the year ending July 2019. 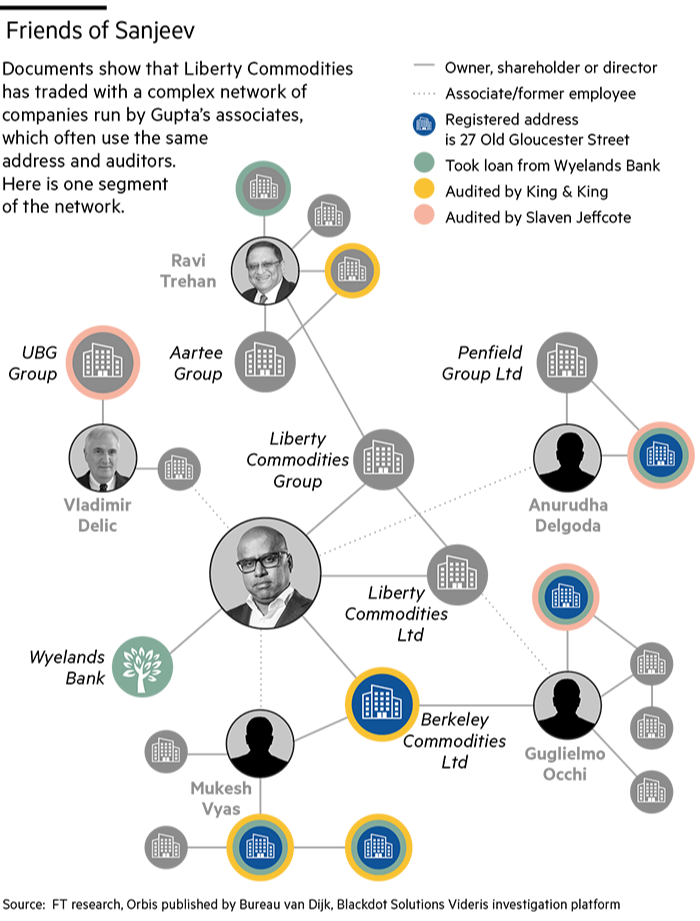 Inventia is not a unique entity in the Gupta constellation. It is just one link in a chain of companies that Gupta’s employees called the “Friends of Sanjeev”, many of which share this same address and auditor.

While ostensibly independent, employees of the GFG Alliance were often deeply involved in their administration, at times co-ordinating audits, signing loan documents on their behalf and even helping set up corporate websites.

The FT has been able to piece together the ways these seemingly independent entities are interwoven with one another — through a revolving door of shareholders and directors — using public records, together with interviews with people directly involved in many of the transactions.

A carousel of shareholders

Some of the more than 100 other companies listed on the ledger have had a carousel of different owners and directors over the years.

Berkeley Commodities Limited, like many of the “Friends of Sanjeev”, now lists its office as 27 Old Gloucester Street in central London and uses the services of King & King. 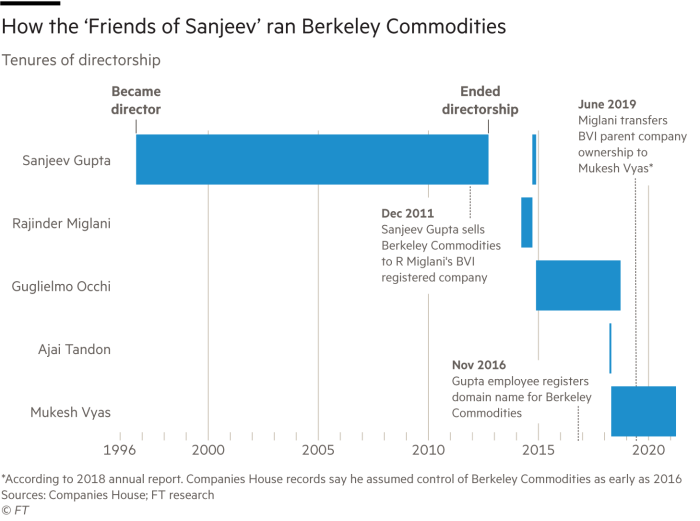 Sanjeev Gupta himself previously owned Berkeley, but a decade ago sold it to Rajinder Miglani, the founder of now-insolvent Indian steel manufacturer Uttam Galva.

In March 2018, Berkeley’s sole director was Guglielmo Occhi, an Italian businessman who resigned the role later that year. At the same time, Occhi controlled another similarly named group — BCL Commodities — that is also listed in the ledger.

Later that year, BCL’s UK entity obtained a loan from Gupta’s Wyelands Bank. Occhi did not sign the loan documents, however. Instead, the signatory on BCL’s behalf was Rajeev Gandhi, the chief financial officer of Simec, Gupta’s father’s business.

Before it was deleted last year, Occhi’s LinkedIn profile described him as the “head of trading” at Liberty Commodities. However, reached by phone, the 49-year-old Italian said he stopped working for Gupta “seven or eight years ago”.

A few days after the FT initially contacted the businessman, BCL filed a notice declaring that Occhi had resigned as a director. He later told the FT that he had stepped down a month prior to this, however, describing the delayed filing as “very strange”.

A separate batch of receivables, worth tens of millions of dollars, shows that another group of Liberty Commodities’ counterparties are companies owned by a man called Tejash Shah.

Shah appears to be a current Liberty employee. When the FT sought to contact him at Liberty’s Dubai office, an employee confirmed he still worked there and had been with the company “almost from the beginning”. Shah and Occhi’s Liberty Commodities email addresses both still functioned.

Business with friends has brought Gupta into legal jeopardy in the past.

In 2017, a specialist trade finance fund sued Liberty Commodities, alleging it had defaulted on a $25m loan that Gupta had personally guaranteed and seeking payment and interest.

The lawsuit provides another window into the unusual connections between seemingly separate companies.

The transactions underpinning the debt seemed straightforward: Gupta’s business bought nickel from two other commodities traders and sold it to a third, shipping the goods to China and Taiwan.

But a closer look at the three parties in the trades — UBG Commodities, Taurus Metallurgicals and Penfield Group — shows they had close links.

Months before the shipments were made, a glossy corporate brochure produced by GFG Alliance listed the owners of Taurus and Penfield — Ravi Trehan and Anurudha Delgoda — as key executives at the conglomerate.

Now based in Sri Lanka, Delgoda began working for Liberty Commodities in the late 1990s, a role that saw him travel to far-flung locations such as Ukraine and Nigeria, where Gupta’s two brothers own a steel business.

Trehan’s ties ran even deeper. At the time of the transaction, the Indian businessman owned a minority stake in Liberty Commodities, according to Singaporean corporate filings, meaning he was effectively on both sides of the trade. Trehan’s Aartee Group told the FT it was a “separate independent business” and had since divested this stake.

UBG, the other party in the trades, is owned by Vladimir Delic, a veteran Croatian trader and longtime associate of Gupta. A week before Delic signed incorporation papers for the metals trading company in the UK, the web domain ubgcommodities.com was registered to a Liberty employee’s email address.

The weblink was still live earlier this year, redirecting to Delic’s main trading company Unibros. It appears to have now been taken offline, however, following an FT report this month that flagged Gupta’s links to a series of questionable web domain names.

The FT reported that an email address of a Liberty employee was used to create both web domains that resembled well-known commodity trading houses and also domains for “Friends of Sanjeev” companies.

Sanjeev Gupta himself once helped the now 75-year-old trader set up a Panamanian shipping company, writing to an employee in an email disclosed in the 2016 Panama Papers leak: “Select one of the cos and form a shipping co immediately with nominee director & shareholders & [beneficial owner] as Delic.”

Liberty employees then helped Delic’s new company to apply for a bank account in the Bahamas. Meanwhile, Liberty Commodities’ chief financial officer was keen to ensure the establishment would appear to be staffed, writing to now-defunct incorporation agent Mossack Fonseca: “Please do not say to the caller that this is the answering service.”

Companies controlled by Delgoda, Trehan and Delic are listed as having owed about $80m to Gupta’s commodities trading operation in March 2018.

Liberty Commodities’ UK entity extended or shortened its accounting year end date three times since 2019, when its accounts capturing these transactions were due to be filed.

Another German metals trader listed in the ledger is AIC Commodities, owned by a longstanding business contact of Gupta’s called Götz von Kayser.

“I wouldn’t necessarily call me a friend of Sanjeev’s, but we’ve known each other for a long time and we’ve done business together,” von Kayser said. “Obviously it’s uncomfortable for me right now, because there’s a significant lack of funds for them to pay their bills.”

AIC’s UK entity also uses 27 Gloucester Street as its address, previously borrowed money from Wyelands Bank and is audited by King & King. Von Kayser told the FT that “one of Sanjeev’s guys” had recommended the accountancy firm.

In January 2020, AIC Commodities (UK) filed accounts showing it was a dormant company with £1 in assets. But the following month, just days after the FT published an investigation into Wyelands Bank, the company filed “amended accounts” showing it had actually booked more than $100m in revenue that year.

Von Kayser initially said he was unaware of the error. The 60-year-old German later explained in an email that King & King had informed him the mistake stemmed from “an internal communication error” between the accountant’s employees.

“There may be things to question and/or criticise, I don’t know,” von Kayser wrote. “But I guess it’s a safe bet to say that not everything has been part of a gigantic conspiracy.”