The $24bn dash for cash that kept Carnival afloat

On the same day Moody’s slashed Carnival Corporation’s credit rating and the World Health Organization declared Covid-19 a global pandemic, David Bernstein, the cruise company’s finance chief, was in the Broadway theatre district of New York to watch a play about the fall of another corporate behemoth.

The March 11 performance of the Lehman Brothers Trilogy was the last in 2020 at the Nederlander Theater. Later that week, the coronavirus crisis forced venues to close as the global economy spiralled into one of the worst crises since Lehman’s collapse at the height of the 2008 financial crisis.

More than 2,000 miles away, off the coast of California, 3,500 passengers were stuck on board the Grand Princess, a Carnival ship that had suffered an outbreak of the virus and was unable to dock. It was the beginning of a storm that would ravage the cruise industry.

Bernstein, then 62, had travelled to New York to meet his new grandchild born a few weeks earlier. He tried to buy a face mask for his flight back to Miami, but pharmacies were sold out. When he arrived at La Guardia airport on March 14, the terminal was deserted.

“It was such an eerie feeling.” he said. “I realised as a result of that trip home just how dramatically the world had changed.”

In the year to March 2021, Carnival burnt through more than $7bn of cash. The group posted a $10.2bn net loss in its 2020 fiscal year as its revenues plummeted 73 per cent. In a sign of the financial scarring, Carnival’s credit rating was slashed from A minus, a top-tier investment-grade rating, to B, a rating associated with risky companies.

Carnival weathered the ordeal in large part because of its ability to raise $23.6bn from debt and equity investors in less than 12 months, propelling it to become one of the biggest issuers in the US junk bond market. 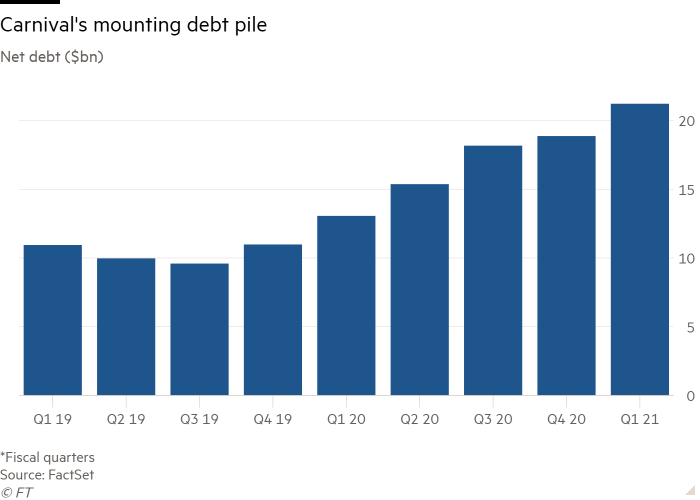 Its story exemplifies the debt-fuelled recovery from the pandemic that has taken hold across the world, aided by historic central bank interventions that have favoured large companies with access to capital markets. It is also a symbol of last year’s borrowing binge, with companies now grappling with vast debt piles.

“It really is amazing,” said Pete Trombetta, an analyst at Moody’s responsible for rating cruise lines. “Without access to capital markets [Carnival] wouldn’t have made it this far.”

Bernstein had already begun crisis conversations with bankers from JPMorgan, Goldman Sachs and Bank of America to save Carnival from the economic fallout of the spreading virus at the end of January.

As case numbers climbed and governments began to take drastic action to curb the spread, the conversations took on greater urgency. In March, the amount the company needed to borrow climbed from around $1bn to closer to $6bn. Bernstein was “planning for the worst”, he said.

No solution was off the table. As well as speaking to banks and exploring public debt offerings, Bernstein held talks with “pretty much all of the top private equity firms in the United States” about possible financing packages. He looked at small loan consortiums and selling equity directly to private investors.

It was unfamiliar territory for the CFO of an investment-grade company, used to more conventional financing options. “During the month of March, I had the most extensive education on every single possible financial instrument available to us at the time,” said Bernstein.

He says he slept just three or four hours a night, waking at 4am eastern time to speak to European investors as the need for cash became more urgent.

A group of funds that included Elliott Management Corporation and Apollo Global Management pitched a multibillion-dollar loan at an interest rate close to 15 per cent, according to people familiar with the deals. Sixth Street had also approached banks in March with a list of companies they would consider financing, eventually offering $1.5bn to Carnival that would convert to equity and sit behind a public, secured bond on the seniority ladder. The details of the potential packages were first reported by the Wall Street Journal.

But on April 1, the company turned solely to public markets, selling a $4bn bond deal, backed by 86 of its vessels, alongside a convertible note and equity — added to help comfort lenders. 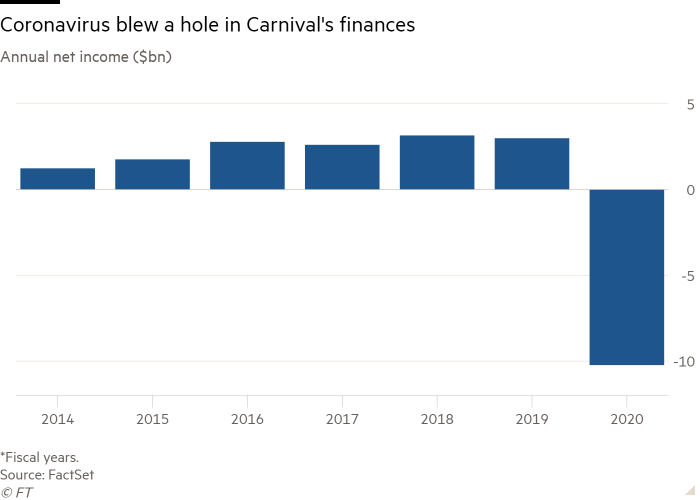 The outcome was very nearly different. Calls and emails between banking chiefs, private equity heads and Bernstein ran up to the wire, said the people familiar with the deals. “Decisions were made at 11, 12, 1 o’clock in the morning the day before launching as to the optimal structure,” Bernstein said.

The reason Carnival moved away from the private equity offers came down to cost, Bernstein said, helped along by furious demand from bond investors. Carnival secured an 11.5 per cent coupon for the three-year secured bond, still an interest rate typically associated with some of the most distressed companies in the world.

The Carnival deal marked a pivotal moment, not just for the cruise line but for corporate America more broadly because it showed capital markets remained open even to companies worst-hit by the Covid-19 crisis. 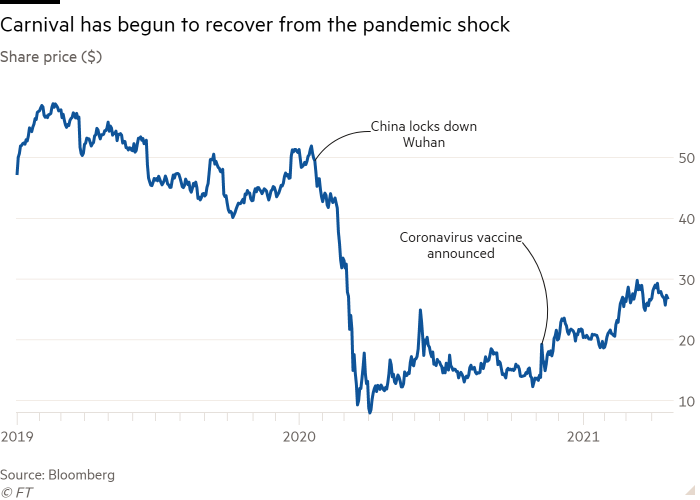 Investors, bankers and analysts say such deals would not have been possible without the Federal Reserve, which on March 23 took the unprecedented decision to begin buying corporate bonds among a series of other measures that soothed turbulent markets.

People familiar with the proposed private equity deals say the nature of the discussions changed as soon as the Fed’s announcement came.

Bernstein said he reckons Carnival would have made it through the crisis even without the central bank’s stimulus, but “to this day, I have no way of judging what would have happened had the Fed not done what they did”.

The fundraising was a lifeline, giving the company enough money to last until the end of the year, according to estimates from S&P Global Ratings. Attention turned to amending key terms on deal documents with dozens of different institutions, in part to allow the company to raise more money in the future. 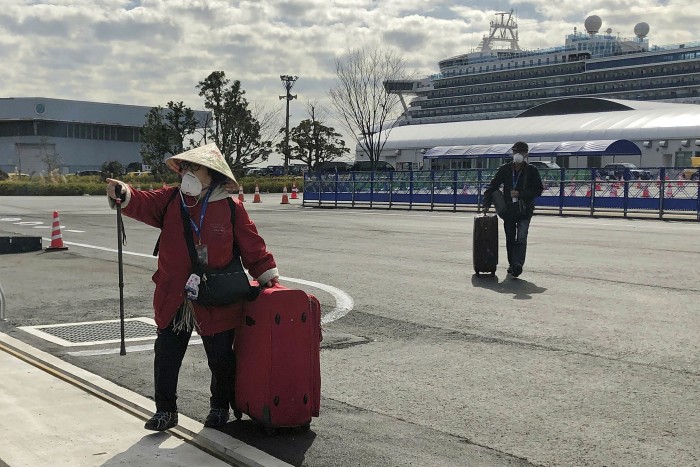 Passengers leave the Diamond Princess cruise liner after a two-week coronavirus quarantine in the port of Yokohama, Japan © Igor Belyayev/TASS via Getty

The company raised another $2.8bn in the loan market in June, followed by a $1.3bn bond in July and another $900m bond in August. Private equity companies would still occasionally call, but it “became apparent that the public markets were available and that those were the better alternative”, said Bernstein.

“From a lender’s perspective, if you have already lent [a company] money then you don’t want them to file for bankruptcy,” said John McClain, a portfolio manager at Diamond Hill Capital Management, noting that Carnival is now almost too big to fail from a debt market viewpoint. “You will lend them more and more money until they get back to normalcy.” 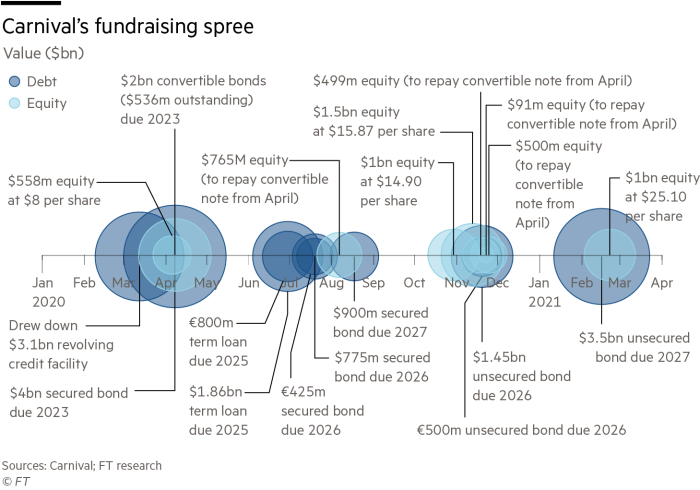 Bernstein was just out of the shower on the morning of November 9 when he received the news that Pfizer and BioNTech had developed a coronavirus vaccine that was found to be 90 per cent effective. “I was just ecstatic. I realised that was a game changer,” Bernstein said.

The company’s bonds had already begun to rally over the summer. They jolted even higher on the vaccine news. Carnival’s stock price rose from $13.71 at the end of October to $21.66 by the end of 2020. The end was in sight.

“It was never about survival. I knew we would survive. But what would we look like?” said Bernstein, adding that the vaccine announcement dramatically reduced the possibility of a messy corporate restructuring.

But the company that exists today still looks very different to what it was at the start of 2020. Carnival has $11.5bn of cash on its balance sheet after completing a $3.5bn bond deal in February, enough to last into next year even with zero revenues. It is still locked in negotiations with authorities for permission to restart cruising in the US, its most lucrative market.

It is also defending itself against potentially costly class-action lawsuits brought in the US by more than 100 passengers who claim they caught coronavirus while on board Carnival ships in February and March last year.

Even once earnings do return, a greater portion of Carnival’s cash will need to go toward servicing its mammoth debt pile. Carnival has paid more than $1.2bn in interest over the past year, up from just $200m in 2019.

“There is still a lot of risk here,” said Moody’s Trombetta, adding that the increased interest burden “hampers” Carnival’s outlook.

Bernstein says he is already at work on extending the maturity of Carnival’s debt through new fundraisings and reducing the amount the group needs to spend on interest payments. He also hopes to regain the company’s coveted investment-grade status.

“This will take a number of years before we get our balance sheet back to where it was pre-Covid ,” he said. “Our goal is to get back to that level.”