Josef Aschbacher is categoric. There is intelligent life somewhere in the universe, says the new director-general of the European Space Agency, but humanity will not find it — at least, not in his lifetime.

“Intelligent life on this Earth is nothing but a split second and the probability in this split second that we communicate with somebody who at the same time has this intelligent life developed . . . is pretty small,” he says, from his new office at ESA’s Paris headquarters, a satellite image of the earth glowing on the wall behind him.

Aschbacher, 58, must have been asked about life on other planets thousands of times during his 31 years at the agency. But he still relishes the chance to debate the subject and, with it, the meaning of life on Earth.

“This is what inspires people and makes people become explorers and go crazy about space. Me included!” he says with enthusiasm. “Space is simply the dimension you want to explore to have answers to the very fundamental questions which people have.”

But as the director-general of ESA since March, Aschbacher has more immediate questions to address — ones just as important for the future of Europe’s space ambitions and for the 46-year old agency.

Top of his list is to resolve the tensions over ESA’s relationship with the EU which risk hobbling Europe as the rest of the world embarks on a new race for space. Sixty years after Yuri Gagarin became the first man in orbit, not only is there a global resurgence of interest in space exploration but US billionaire Elon Musk has also opened up space for commercial ventures with his SpaceX reusable rockets, able to launch satellites into orbit at a fraction of traditional cost.

Musk and fellow US billionaire Jeff Bezos are now among those planning to colonise low earth orbit (LEO) with mega constellations containing several thousand satellites each in an attempt to deliver internet services from space.

Europe has been slow to recognise the emergence of this so-called “new space” opportunity, says Aschbacher. In setting out his priorities for his mandate this month, Aschbacher pointed out that private funding for US space start-ups in 2019 came to €5bn compared with €188m in Europe, encouraging some young European companies to relocate. Japan, China and others are following similar strategies.

Agreement on ESA’s role in Europe’s space strategy is imperative if the region is to catch up, and its space sector to flourish, he says. “Certainly there is a sense of urgency . . . and I do believe that this goes way beyond ESA. It is really about what . . . space means in Europe,” he says.

The ESA is not an EU body, but an intergovernmental organisation which counts both the bloc’s member states and non-EU countries such as the UK, Norway, Switzerland and Canada among its funders. Its job has been to design and implement the space programmes chosen by its members, who in 2019 agreed the agency’s biggest budget increase in 25 years.

Yet in recent years Brussels has pushed for greater control over ESA. When that was resisted by ESA members — including the UK, which stepped up its funding to ensure its place at the top table post-Brexit — Brussels decided in 2019 to create its own European Union Space Programme Agency. The fear inside ESA has been that crucial funding from the EU might be diverted to the new body, ostensibly intended just to run programmes once they become operational.

Aschbacher’s predecessor, the outspoken Jan Wörner, was unable to resolve the dispute before he left, and negotiations continue over the division of responsibilities. The sense of urgency has intensified since the EU announced ambitions for its own mega constellation in low orbit.

But Aschbacher believes his experience running Europe’s Copernicus Earth observation programme — an EU-led project he has co-developed over the last 20 years — gives him the tools to reach a compromise.

“In Copernicus, I was always very conscious of the different ambitions and tensions that can be created between the two,” he says. “But I always took great care to find ways and methods to work together, where both find complementarity.” 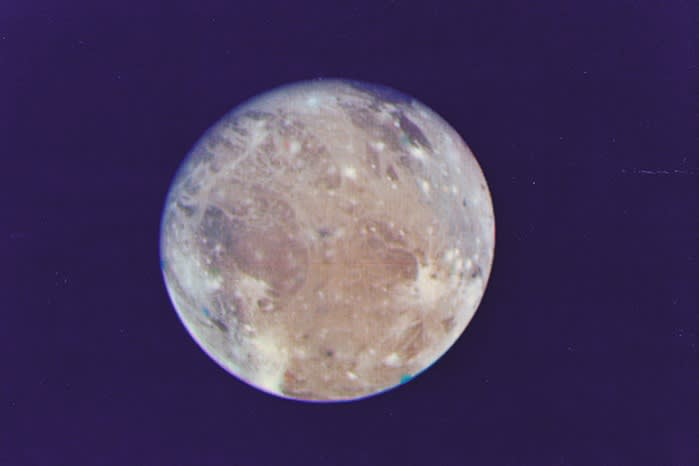 Ganymede, Jupiter’s largest moon. The ESA will be launching a mission next year to study Jupiter and its three biggest moons © JPL/NASA

Aschbacher has made a good start with Thierry Breton, EU commissioner responsible for space. In January Breton welcomed his appointment and stressed Europe’s commitment to ESA.

But defining the relationship is only the beginning. To re-energise Europe’s space industry, he will also have to convince ESA’s members to agree to painful changes. That includes allowing the agency to bypass Arianespace — Europe’s flagship rocket launch company — in favour of allowing new European challengers with lower cost technology to launch the bloc’s satellites into orbit.

“I would like to see more competition,” he says. “Competition makes . . . players even stronger even if it is a bit hurtful at some point.”

“At the moment we are not competitive,” Aschbacher says. “The situation is not getting better, it is getting worse. The prices at which Chinese commercial launchers will go on market will be shocking, even to Elon Musk. We have to adapt to this reality. We have no choice.”

Aschbacher’s agenda for his four-year mandate is hugely ambitious. As well as more competition, he wants to slash red tape, cutting substantially the time to develop new technologies. He has promised to open up ESA’s expertise and facilities to European start-ups and other commercial actors. Finally, he wants to convene ESA heads of state to a space summit next year, where they would back new flagship space programmes.

Who is your leadership hero and why?

If you were not DG of ESA what would you be doing?

I would still enjoy the second best job in ESA, Director of Earth Observation Programmes. But I am thrilled by the new challenges as ESA DG, and it clearly is my dream job.

What was the first leadership lesson you learnt?

Listen. And once you have consolidated your decision based on many people’s good advice, move fast and [be] decisive. And be courageous.

Committing to the LEO constellation is one option. Aschbacher believes that could be the avenue for Europe to catch up in commercial space. ESA still has about €900m left from its current budget which could be used for it, he says. But this has to be substantially different from those already under way. “The challenge now is to make sure that these investments are geared towards . . . a winning concept for Europe,” he says.

Aschbacher may have concluded that Europe failed to “read the signs of the times” in the commercialisation of space but he is not pessimistic. Europe remains a core partner to the US in space exploration, participating in Nasa’s Artemis mission to return an astronaut to the moon by 2024. ESA’s expertise in exploration puts Europe on a “much more level playing field”, he says, pointing to the agency’s JUICE mission launching next year to Jupiter’s icy moons.

Back on Earth, Aschbacher has until 2025 to start making a difference, a mission as important to the planet as it is to his own ambitions for Europe. “Europe has always been on the frontline of . . . climate change and sustainability. This is something that Europe . . . should continue doing and we should employ the best assets we have, including space assets. This is really [about] caring for our own future, the planet at large.”