‘It was too good to be true’: holiday-let landlords count their pandemic losses

When Carlota Godinho, 51, moved back to her home city of Lisbon from London in 2014, she found home-sharing sites offered her a new way to live and work. Using her savings to buy and renovate two apartments for use as holiday rentals in the city centre, and enjoying being self-employed, she devoted herself full time to the work.

“I put everything into it to make people’s stay the best it can be. It’s a job that gives great satisfaction,” she says.

But since the pandemic, when lockdowns and travel restrictions saw tourism in the city collapse, both her business and lifestyle changed dramatically. Her income from the apartments has fallen by 70 per cent, she says. Searching for guests, she has turned to midterm lets, targeting “digital nomads” who can work from anywhere and who are in search of a change of scene.

With only €1,200 received from the Portuguese government in pandemic support, she is tightening her belt. “You cut every expense; even when I can I simply don’t go out to eat,” she says. All travel within Portugal and any impulse purchases are out. “A return to normal is a long way off. Next spring if we’re lucky,” she says.


Before the pandemic the short-term rental model was so attractive to investors in many cities (pictured, Lisbon) it was blamed for reducing rental supply and pricing out locals © Getty Images

In cities around the world, holiday-let investors have endured something of an annus horribilis. From March 2020, when much of Europe first introduced Covid-19 lockdowns, revenues from properties rented through home-sharing platforms have fallen sharply. In February this year, total revenue collected by hosts in Amsterdam was 84 per cent lower than the same month a year earlier, according to AirDNA, which tracks the short-term rental market. In Lisbon, revenue fell by the same amount; London and Barcelona fell 80 per cent, and Venice fell 77 per cent.

In Lisbon, holiday-let revenue fell by 84 per cent, in London it fell 80 per cent and in Venice 77 per cent

Yet hosts in rural and coastal destinations have reported bumper takings, as visitors sought to escape the constraints of city living during the pandemic. In the last quarter of 2020, more guests stayed in Sicily than in Florence and Venice combined, according to Airbnb; and more stayed in Devon than in Oxford and Cambridge combined.

John and Mary, who declined to give their real names, have experienced both extremes. A studio attached to their family house in San Francisco, which brought in $3,000 a month in 2019, sat empty last year, thanks to pandemic restrictions and the slump in demand. 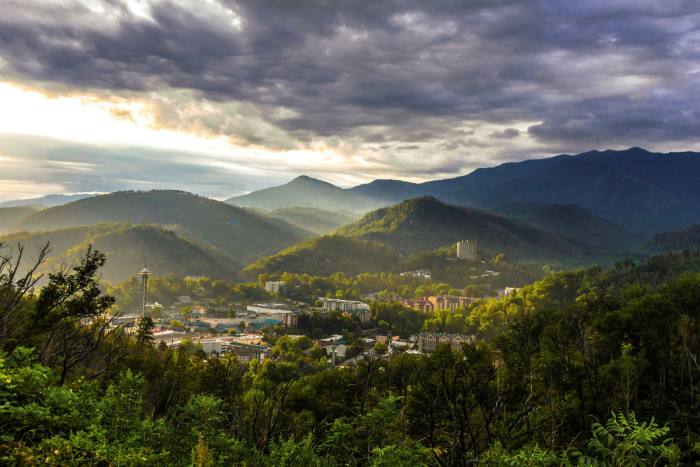 The Great Smoky Mountains, Tennessee: remote locations are the one area where holiday lets have had success this year, as people seek escape from pandemic-ridden cities © Getty Images

But their cabin in the remote Great Smoky Mountains, Tennessee, has had its best year yet, even after giving guests for March and April 2020 full refunds when lockdown came. “We have increased the rates and minimum number of nights. We are booked back-to-back and this has been the most profitable year in the past three years that we have owned it,” says Mary.

The rise of short-term rentals

Before the pandemic, letting a property on a site such as Airbnb in some major cities could provide a much better return than letting it to long-term renters. For a home in the centre of Barcelona, a holiday-let business could make an annual gross yield of 8 per cent, compared with 4 per cent on the long-term market, says Mohammad Butt, head of the investment team at estate agent Lucas Fox.

In Lisbon, a holiday let might bring in a yield of 5 per cent, compared with 3 per cent as a long-term rental, says Lloyd Hughes of estate agency Athena Advisers.

The short-term rental model was so attractive to investors that many residents groups blame platforms such as Airbnb for reducing rental supply and boosting prices to levels that locals have been unable to afford. The collapse of tourism has been dramatic: Lisbon’s Rua Augusta this month and, below, before the pandemic © Getty Images Many hosts were attracted by the ease of the process. “You’d show [guests] up to the room, the money went into your account the next day,” says Ruth, 52, who only wanted to give her first name. She rented one — and sometimes several — rooms in her four-bedroom house in Ealing, west London. “Sometimes you didn’t even see them until they left. I always had a feeling that it was too good to be true.”

Ruth earned £26,000 in 2019 but managed only a fraction of that last year, when lockdown meant she saw a bit too much of her guests. She currently has only one booking between now and the summer, when typically she would have £10,000 worth. “The profit has gone out of it. And you’re really house-sharing now,” she says. “It will never get back where things were.”

Switching to the long-term market

Holiday lets repurposed for long-term tenants have added to the supply in city-centre areas, which were already falling out of favour thanks to the rise of homeworking and the added risk of infection in dense urban areas.

Despite this, short-term rental landlord George, who declined to give his real name, is considering switching to become a long-term landlord. Until the pandemic struck, he and his wife, who are originally from the UK, charged up to €700 a night for each of their five large apartments located along Lisbon’s Avenida da Liberdade, using short-term rental sites such as Airbnb, TripAdvisor and Booking.com.

In a typical year, the business turned over between €250,000 and €300,000. But when the city entered lockdown, their income collapsed; they made roughly €35,000 in 2020. “There is still no pick-up in 2021 as guests tend to book on short notice and have not yet started coming,” he says. Two of the apartments are now for sale — under a longstanding plan, accelerated by the pandemic — and the couple are about to move into a third to live.

As some landlords abandon the tourist market in favour of long-term contracts, many renters — who had previously been pushed out of European cities by high rents and a scarcity of homes — are returning as their tenants. In the last quarter of 2020, more guests stayed in Sicily than in Florence and Venice (pictured) combined, says Airbnb © Utrecht Robin/ABACA/Reuters 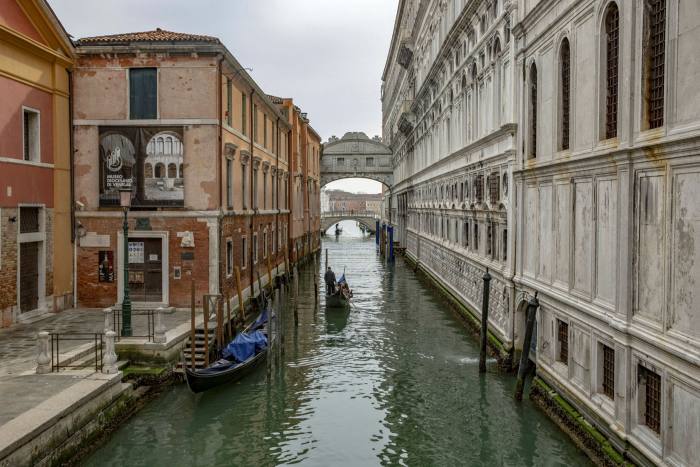 Marianna Purisiol, 51, who was born and raised in Venice, returned to the city from London in 2016. For four years she lived in a cramped shared flat in the Rialto district, with a rolling one-year contract. But after the start of the pandemic, there was a jump in adverts for homes offered on long-term contracts, she says. In October last year, she and her partner began a four-year contract in Castello. “Finally, I have the sense of stability that I came [home] for.”

Rather than commit to long-term tenancies, many landlords are keeping homes empty and waiting for tourists to return. Ziga Volk, 36, quit his job as an interior designer to run holiday lets in a flat he inherited in 2014 in the centre of Slovenia’s capital, Ljubljana.

The pandemic saw him cut his nightly fee in half: from the few months he could operate in 2020 he earned €5,000 — down from €25,000 in 2019 — and he got by on government support, his savings and the income from his girlfriend’s job. But Volk says a long-term rental would make a maximum of about €10,000 a year, so he is gambling on an end to travel restrictions and tourists’ return. “It may prove a mistake but there we go.”

Many holiday-let landlords are wary of switching to long-term rentals because they fear they may not be able to return to tourism once the pandemic is over. Eduardo Miranda, president of the Association of Short-stay Landlords in Lisbon (ALEP), says his members fear if they move to long-term lets, the government will change the rules, leaving them facing harsh rent controls or trapping them with tenants they can’t evict. Many landlords are switching to long-term rentals but others are wary: in Barcelona (pictured) this would mean giving up a short-let licence © Carmen Molina/SIPA USA/PA Images

In Barcelona, landlords switching to long-term lets would have to give up their licences to host holiday lets, which they would be unlikely to get back, according to Enrique Alcántara, president of the Association of Tourist Apartments in Barcelona. The total number of 9,600 licences has remained unchanged for the past seven years, he says.

Like Godinho, many landlords have switched to midterm tenants, including one-term university students, digital nomads and business visitors, until tourist demand returns. In Barcelona, more than 70 per cent of Alcántara’s members are focusing on this market, he says. Average incomes have dropped by half but the homes are occupied — in Barcelona there is a high risk of squatters, he says — and members get some income. 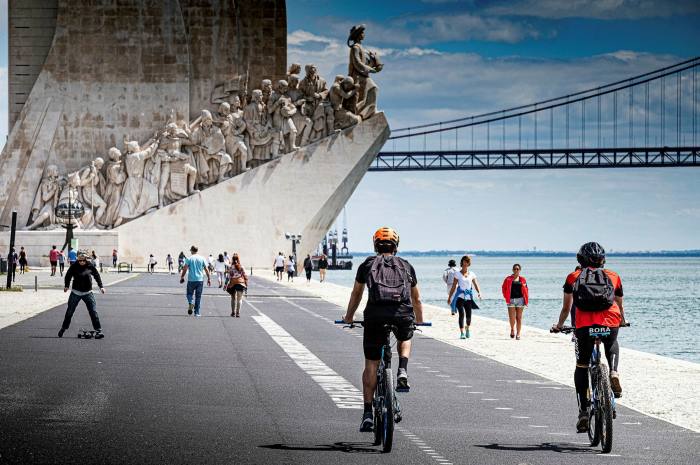 The switch requires different skills of landlords, says Godinho. A local lawyer helped her draft a contract and she had to change how she markets and manages her apartments. “I had to understand this market, it’s a totally different way of working,” she says.

Miranda says that two-thirds of Lisbon’s short lets are offered by locals like Godinho, who are relying on them for their income. “On average they are in their fifties and this has become their profession. It would not be easy for them to get another job,” he says.

And the impact stretches beyond landlords. “[It affects] those doing check-in, maintenance, cleaners, local grocers. This is a huge network and a very important part of [Lisbon’s] economy.”

Even assuming they can survive the huge hit on their incomes, short-term rental landlords holding out for tourists to return may find it harder to operate in the future. Around Europe, city governments have been tightening restrictions on home-sharing platforms over the past year.

In July 2020, Amsterdam banned short lets over home-share platforms in three central neighbourhoods, capping use at 30 nights a year and groups to a maximum of four in the rest of the city — although in March this year, a local court overturned the ban. 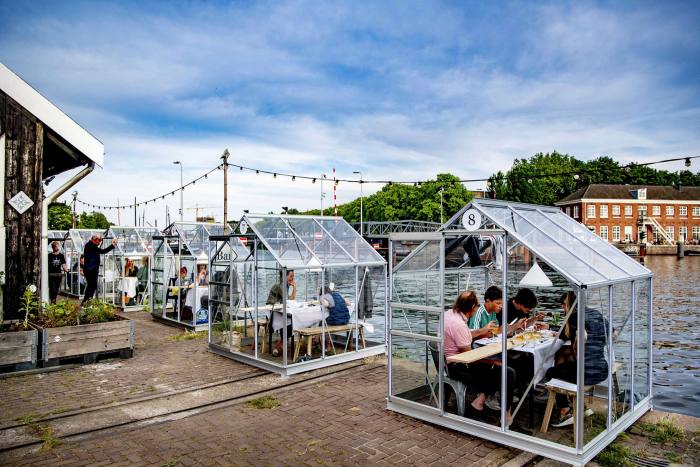 Paris mayor Anne Hidalgo has promised a referendum on the use of home-sharing platforms; earlier this year, Airbnb agreed to enforce host registration in Paris, Lyon and Bordeaux and to extend the move to other cities after July.

In February, Berlin’s Senate, the city’s executive body, proposed a rule change requiring all providers of holiday lets to register, and show registration numbers in their adverts, that could be passed as early as May.

FT subscribers can sign up for our weekly email newsletter containing guides to the global property market, distinctive architecture, interior design and gardens.

Last September, mayors and leaders from 12 European cities met Margrethe Vestager of the European Commission to demand Europe-wide rules that would force platforms to co-operate to enforce restrictions.

Mark Boekwijt, the Amsterdam city representative who is leading the efforts, says platforms refuse to take down illegal listings — such as those that exceed annual rental caps — or share information about them so that city authorities can take action. “We need EU legislation that will allow us to force platforms to take offline any advertisements that are illegal.”

“We want to build relationships with authorities that restore tourism in a sustainable way,” Airbnb told the FT. “That’s why we [ . . . ] are supporting the EU Commission’s work to develop consistent rules and share data.” It points to a new portal it offers governments to access information about Airbnb users.

Back in Lisbon, with her income cut by more than two-thirds, Godinho faces more pressing issues than the prospect of tighter rental rules. But she has no plans to quit her life as a short-let landlady. “People on holiday are happy,” she says. “What better job than to welcome people who are happy? It’s a great job.”