Supporters of jailed Russian opposition leader Alexei Navalny say they are facing unprecedented pressure to end their backing for President Vladimir Putin’s most prominent opponent, as a Moscow court is poised to designate their organisation an “extremist” movement on a par with jihadi group al-Qaeda.

A closed court hearing on Monday is expected to uphold a request by prosecutors to declare Navalny’s organisation “extremist” — a move that would cut it off from funding and could result in 10-year prison sentences for members.

The onslaught against Navalny’s dozens of offices across Russia “will evidently make their activity impossible”, Leonid Volkov, the opposition leader’s chief of staff, told the Financial Times.

The “extremist” designation appeared designed at shutting the offices down in one fell swoop, he said.

“It’s a ban on any public activity, on publicly mentioning [the group] — it’s basically one step away from saying that mentioning Navalny’s name is extremist.”

They’re right to think our regional offices can catalyse the vote against them. They understand our . . . investigations won’t go away even if they designate [us] extremist, terrorist and Satanist

Ahead of the expected ruling, activists working for the opposition leader say they are in a state of siege. Some have shut down their local offices, while others have begun scrubbing their presence from Russian social media sites owned by Kremlin-friendly companies.

Police have stepped up the pressure since January’s protests, which called for Navalny’s release from jail, where he is serving a two-and-a-half-year sentence in a case widely seen as an attempt to neutralise his influence. Several have spent short stints in prison, while others say they have faced increasingly severe intimidation tactics.

In Rostov, a city near the border with Ukraine, local office co-ordinator Ksenia Seredkina said unknown men took her away in the middle of the night and tried to force her to suck a rubber baton — scratching a letter N for Navalny on her arm each time she refused.

In Murmansk, someone slipped a target from a shooting range into Violetta Grudina’s mailbox and left her neighbours flyers warning she was “perverting children,” she said.

“I’m under fire. How else are you supposed to interpret a target?” said Grudina, who runs Navalny’s office in the city on the Barents Sea 2,000km north of Moscow.

Since he emerged to lead the anti-Putin opposition in 2011, Navalny has shown himself remarkably willing to take official reprisals. After recovering in Germany from a nerve-agent poisoning he alleges was ordered by Putin, he returned to Russia in January in the full knowledge he would be arrested as soon as he arrived.

Previously, he had spent 13 stints in jail for protesting against the Kremlin, been physically attacked several times and saw his brother Oleg jailed for three and a half years for fraud, a move Navalny said amounted to “hostage-taking”.

Putin, who denies any involvement in Navalny’s poisoning, has said the activist is a western agent bent on destroying Russia. Last week, in a clear reference to US and EU calls for Navalny’s release, the president pledged an “asymmetric” and “tough” response if they imposed any measures that crossed Moscow’s “red lines”.

The move against Navalny’s foundation and regional network suggest the Kremlin wants to silence the opposition leader for good. A few of his top allies recently fled Moscow for Europe, while police recently detained several staff at his regional offices and a number of opposition activists in Moscow. Further arrests were made at the weekend.

The situation is particularly tough for Navalny’s supporters in the regions, where there is little to no independent media and few civil society groups putting pressure on local authorities. 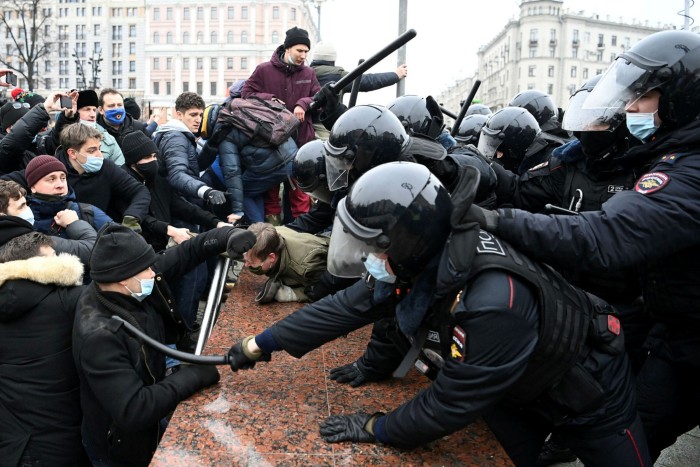 Alexei Navalny’s supporters clash with police at a rally in Moscow in January. The Kremlin has stepped up pressure on his movement since the mass nationwide protests © Kirill Kudryavtsev/AFP via Getty

In Murmansk, a January rally that attracted 2,000 people was “a total record for the last 20 years”, Grudnina said. When she told friends privately she wanted to run for the city council, Navalny’s office in Murmansk was ransacked by unknown assailants who spray-painted swastikas on the walls and sealed the doors with construction foam. Shortly afterwards, her assistant was detained on drug trafficking charges.

Volkov said the Kremlin wanted to stop Navalny’s “smart voting” strategy for September’s parliamentary elections, in which his regional offices endorse candidates from the official opposition parties with the best chance of beating Putin’s United Russia.

“[The Kremlin] don’t know what to do with their low approval ratings, and they’re right to think that our regional offices can catalyse the vote against them,” Volkov said. “They understand that our anti-corruption investigations won’t go away even if they designate [Navalny’s organisation] extremist, terrorist and Satanist.”

Recently police have shown an increasing willingness to expand their focus to Navalny’s grassroots supporters — particularly among young people.

Ahead of last week’s protest, several said on social media that police had put pressure on their parents to sign documents noting that they faced criminal prosecution if their children attended the rally. Other supporters reported receiving threats after an email database from Navalny’s website was leaked online.

In Murmansk, however, Grudina is determined to find a way to continue her activism.

“Would even one Putin supporter go to a protest for him if they knew they’d get beaten with batons and thrown in jail or given kilometre-long fines? No. That’s the difference between us — we are sincerely standing up for our views,” she said. “We’re the last bastion of freedom, honesty, and justice.”