Joe Biden is poised to announce a $1.8tn plan to expand America’s social safety net, which will be funded by hefty tax increases on the wealthiest households, senior administration officials said.

The proposal, spanning a decade and covering areas such as child care, paid leave, education and healthcare, marks the third leg of the US president’s multitrillion-dollar economic agenda, and is expected to be the focus of his first speech to a joint session of Congress on Wednesday night on the eve of his 100th day in office.

The scale of the latest plan — to be called the “American Families Plan” — is larger than expected just a few weeks ago, and reflects Biden’s ambition to remake the US economy with greater government support for struggling households far beyond immediate relief provided during the pandemic.

Among its main features are $225bn in funding for child care expenses and a further $225bn for the creation of a national family and medical leave programme, measures designed to help middle-class households and boost female participation in the labour market.

In addition, the plan provides for $200bn in funding for universal access to pre-kindergarten schooling and $109bn for two free years of community college, as well as additional subsidies for people to buy health insurance. It also extends a tax credit of up to $3,600 per child until 2025.

The plan comes on top of Biden’s $1.9tn fiscal stimulus bill enacted in March, and a second plan, which has yet to be passed by lawmakers, to plough $2.3tn in federal funds into infrastructure spending, to be paid for with higher corporate taxes.

Because Biden’s economic plans are so ambitious, wide-ranging and costly, they face an uncertain path in Congress. Republicans are expected to oppose the plan, which will probably force the president to rely on Democrats’ exceedingly thin majorities in both chambers to pass the legislation.

The most controversial aspect of the American Families Plan is that it is to be paid for with roughly $1.5tn in tax increases on wealthy Americans, a proposal Biden laid out in his 2020 presidential campaign that has already triggered a backlash among some critics on Wall Street and corporate America.

Senior administration officials confirmed that the plan would include an increase in the top income tax rate from 37 per cent to 39.6 per cent for Americans earning more than $400,000, eliminate the preferential tax treatment of capital gains and dividends for those earning more than $1m and scrap provisions allowing people to pass unrealised capital gains to their heirs free of tax.

“The president’s tax agenda will not only reverse the biggest 2017 tax law giveaways, but reform the tax code so that the wealthy have to play by the same rules as everyone else,” the White House said in a fact sheet accompanying its proposal.

Biden wants to combine higher taxes on the wealthy with tougher enforcement of existing tax laws by boosting funding for the Internal Revenue Service. Officials hope an ensuing tax crackdown will yield $700bn in revenue over the next decade. “These issues about tax fairness and making sure that people actually pay the taxes that they already owe are fundamental and necessary,” a senior administration official said.

After presenting the plan to a reduced audience of lawmakers in the US Capitol on Wednesday night, Biden is expected to tout it this week on trips to Georgia and Pennsylvania, two swing states that helped him unseat Donald Trump in the 2020 election. 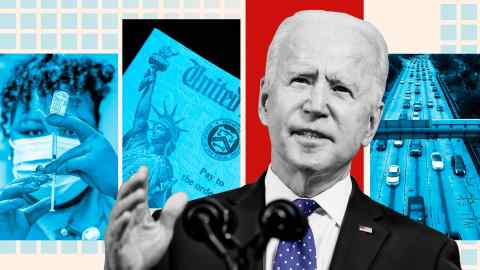 Biden has stressed that he was willing to negotiate with Republicans, but that he would move forward without them if the GOP blocked meaningful results. A senior administration official said that the White House was open to discussing alternative ways to pay for the latest $1.8tn plan if Congress objected to specific tax proposals.

The US president’s job approval rating stood at 53.1 per cent, according to a RealClearPolitics average, significantly higher than Donald Trump’s at this stage in his presidency. But the figure has been edging lower from a peak of 55.8 per cent in late January after Biden was sworn in.

On the economy, voters generally approved of Biden’s performance, including his stimulus plan and infrastructure proposal, but wanted him to work more with Republicans.