In April 2011 Barack Obama invoked the support of Warren Buffett, the billionaire investor, to try to persuade Congress to impose a minimum 30 per cent tax on Americans earning more than $1m per year. A wall of Republican opposition and scepticism from some moderate Democrats scuttled his effort.

Ten years later, Joe Biden is pursuing his own version of that mission with a plan for even more aggressive tax increases on the well-paid to help fund more than $1.5tn in spending on healthcare and education.

But tax lobbyists caution that the Democratic US president faces another uphill climb, putting the plan at risk of being watered down as lawmakers wrestle with it in the months to come. One stumbling block is likely to be Democrats from affluent districts including suburbs in New York, New Jersey, California and Illinois, on top of the predictable Republican opposition.

“Democrats have come to be reliant and responsive to a relatively wealthy base of support. So over-reach could expose them to political attacks and economic woes, which can alienate those voters,” Mac Campbell, a former Democratic congressional aide and senior vice-president at Lincoln Policy Group, a lobbying firm, said.

The Biden administration’s plan is expected to contain a near-doubling of the tax rate on capital gains and dividends for Americans earning more than $1m a year, as well as a rise in the top income tax rate to 39.6 per cent. The moves would hurt rich investors including hedge fund managers and private equity executives.

The White House is counting on a big recent shift in popular opinion to favour higher taxes on the very wealthy, after high-earners fared well in the aftermath of the financial crisis and during the coronavirus pandemic, while low-income households struggled.

But the White House has already received a taste of the resistance: some Democratic legislators have been pushing hard for Biden to overturn a cap on federal deductions for state and local tax payments enacted by former president Donald Trump. The policy has increased costs for households in Democratic strongholds such as New York, New Jersey and California.

“Democrats from states with high taxes and costs of living have been laser-focused on repealing the cap on state and local tax deduction. The president’s team will need to affirmatively address or correct that policy if they want to have any success on raising capital gains taxes on the wealthiest Americans,” said Izzy Klein, a Democratic strategist and co-founder of Klein/Johnson Group, a bipartisan lobbying firm.

Biden certainly faces a better chance of raising taxes on the very wealthy than Obama did in 2011, when the Republicans had gained control of the House of Representatives and blocked many of his economic policies.

But Biden can only count on the slimmest of Democratic majorities in both the House and the Senate.

“It’s going to be hard to keep everyone on board,” said one Democratic tax lobbyist. “I think the administration is being very aggressive, which probably serves their interests, but I’m not sure that Congress ultimately will be as aggressive. You’re probably going to see modulation of what ultimately gets done.”

Matt Bennett, the co-founder of Third Way, a centrist Democratic think-tank, said he believed an “intra-Democratic compromise” was almost certain to happen.

“One thing that Biden has done a pretty good job of is making the case that we don’t do a very good job in this country with our public policy of rewarding work, and levelling the playing field between earned and unearned ways of making money,” he said. “That is a pretty compelling, broadly resonant set of arguments.”

Prominent business groups have quickly questioned the capital gains tax proposal, however, which comes on top of Biden’s plan to increase corporate taxes to pay for a separate $2tn infrastructure proposal. Suzanne Clark, chief executive of the US Chamber of Commerce, told CNBC that she found the capital gains provision “scary” and signalled that the influential business lobby would campaign against it.

“The idea that we would punish people for investing in the economy right now just seems outrageous. I don’t think that can pass Congress and we’re going to make real sure of that,” she said. 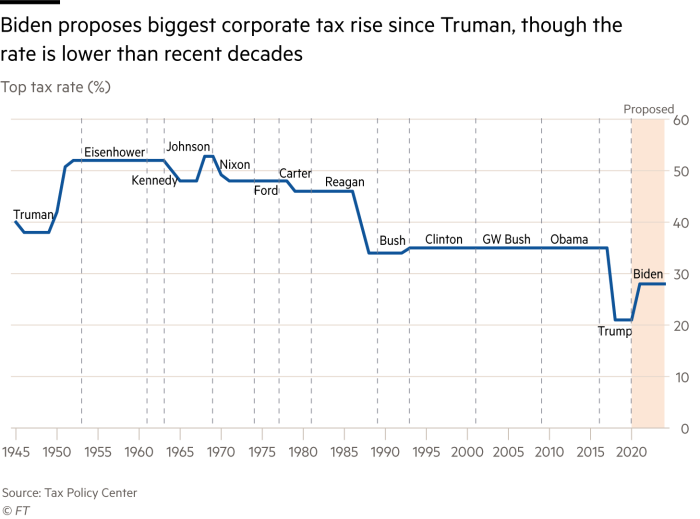 Asked about the White House argument that the tax increase would affect only the richest 0.3 per cent of US households, Clark said that it would have a wider impact on the economy. “The data that concerns us is what it does to investment in public companies [and] what that does to middle class pensions,” she said.

A more muted tone emerged from the Investment Company Institute. The trade association for fund groups said it would analyse the proposal as it was developed, adding: “With tax policy, the devil is always in the details.”

Some investors urged Washington to consider maintaining different tax treatment for capital gains depending on how long securities were held before they were sold.

Colin Moore, global chief investment officer at Columbia Threadneedle Investments, said he expected increased sales of stocks that had recorded strong gains by wealthy investors before any higher capital gains taxes arrived next year. Yet equity markets have climbed further into record territory even as the odds of higher capital gains and corporate tax rates increase.

“You definitely have taxpayers who are looking at a proposed dramatic increase in the capital gains tax rate and saying, ‘If I had a gain I was going to recognise soon, in the next six months or a year, do I want to take a bath on that?’,” said Rohit Kumar, co-head of PwC’s Washington national tax services group. 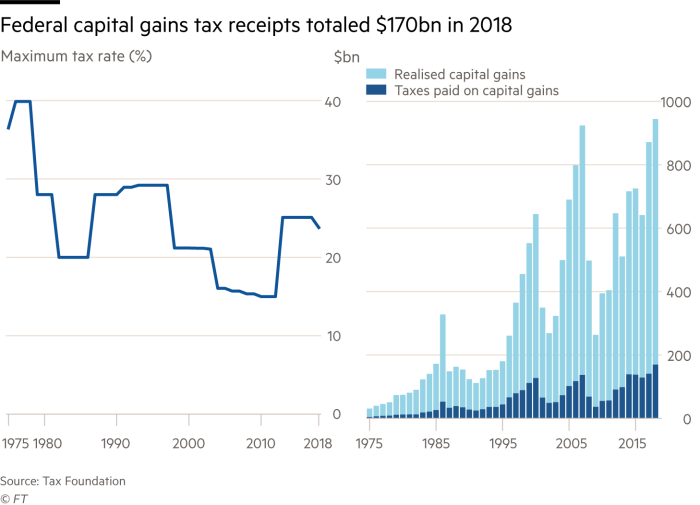 As the debate begins on Capitol Hill, Democratic lawmakers are at the very least coalescing around the idea of improved funding for the Internal Revenue Service to better enforce the tax code, which they say could generate as much as $700bn in revenue over 10 years. Joe Manchin, the moderate Democratic senator from West Virginia, told CNN on Sunday that this option “should be explored before we start raising taxes exponentially”.

After Obama hit roadblocks in 2011, he succeeded in boosting the top income tax and capital gains rates after his re-election in 2012. In 2021, hope is growing on the Democratic party’s left flank that Biden may be able to follow through on his plans, even if he has not endorsed their bolder proposal for a wealth tax.

“A fairer tax system is about making our country better and stronger,” Elizabeth Warren, the Democratic senator from Massachusetts, said on Tuesday. “It is about allowing us to make investments in our economy by asking the wealthiest Americans and biggest corporations to pay their fair share.”