Europeans reassess the double-edged sword of trade with China

EU exports to China have grown at a double-digit pace since the pandemic struck a year ago, a rare bright spot in Europe’s otherwise bleak economic landscape.

But China’s actions in places such as Xinjiang and Hong Kong have made it clear to European companies that trade with China can be a double-edged sword, prompting some to reassess their links to the world’s second-largest economy and call on their governments to take a harder line with Beijing on human rights and unfair competition.

Since the pandemic first struck, China has become the EU’s largest trading partner for goods, the source of almost a quarter of wares imported into the bloc last year, while 10 per cent of the EU’s exported goods went the other way. Two-way trade has risen by 67 per cent in the past decade, compared with the 19 per cent growth between the EU and other countries.

As a result, China’s speedy rebound from the virus has helped to cushion Europe from the much heavier economic blow it experienced. Figures due to be published on Friday are set to confirm that the eurozone plunged into a double-dip recession in the first quarter of this year as fresh lockdowns held back activity.

Trade — and particularly trade with China — is likely to be one of the few parts of the bloc’s economy to buck the trend.

But despite this “success story . . . not just [in] Germany but also the rest of Europe”, Wolfgang Niedermark, executive board member of BDI, Germany’s main industry association, warned of problems.

“It is time to treat China as a competitor as well as co-operate with it as a partner and to confront it when we disagree, such as over human rights,” he said.

China’s internment of Uyghurs, Kazakhs and other Muslims in the Xinjiang region has prompted US, EU, UK and Canadian sanctions, sparking retaliation by Beijing and leaving some European companies facing controversy over their dealings. So has Beijing’s crackdown in Hong Kong.

Niedermark said Beijing had become bolder in asserting its interests, meaning that “the tone from China is different, so we have to take a different approach”.

“We no longer accept that China presents itself as an emerging market that is not ready . . . to play by the same rules,” he said.

Earlier this month, three pressure groups and an Uyghur woman who had been interned in Xinjiang filed a lawsuit in Paris against four European and US clothing makers, accusing them of committing crimes against humanity for buying cotton made using forced labour in the region, which produces about a fifth of the world’s cotton.

“Sourcing cotton from that region is in and of itself problematic and the lack of information is also making it difficult for companies,” said Miriam Saage-Maass, deputy legal director at the European Center for Constitutional and Human Rights which supported the Paris lawsuit. “The only companies that are credible are those that are leaving the region.” The ECCHR is working on similar lawsuits in other countries, including Germany and the Netherlands.

The campaigning is having an effect. Tchibo, the Hamburg-based clothes and coffee maker, has already told the ECCHR that it will stop buying cotton from a Chinese company the campaigners have accused of using forced labour.

The dilemma is particularly acute for German companies, because the intensifying trade relationship is largely a German story.

More than 40 per cent of EU goods imported into China in the 12 months to February were from Germany.

German exports to China rose by 26 per cent in February compared with the same month last year, when the pandemic shut much of the Chinese economy. This compares with a 1.2 per cent drop in all German exports over the same period. 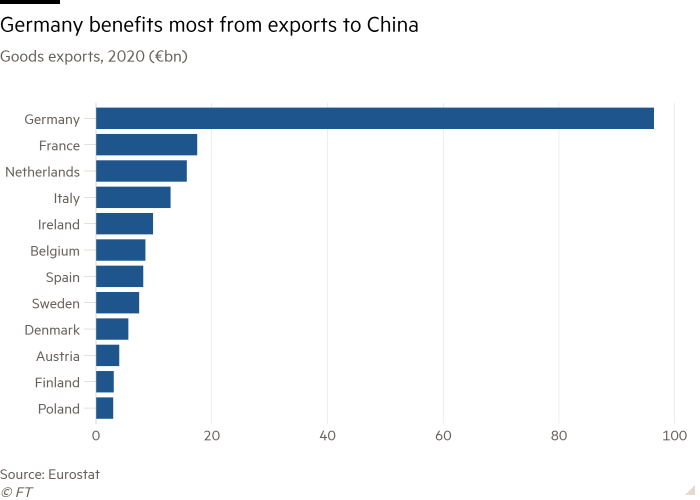 The stakes for German companies will only get higher; Berlin is planning a law that would make companies liable for violations of human rights or environmental standards in their global supply chains.

“This creates a headache for strategic departments of many companies,” said Niedermark, adding that several had urged the BDI to speak out on human rights. “We should address this with our Chinese friends and not shy away from it.”

Volkswagen in particular faces growing scrutiny, as one of the few western carmakers with a factory in Xinjiang. It is a sensitive issue for VW, given its use of forced labour during the second world war and because China is its biggest market.

VW denied that any of its employees “work under duress”, adding that “suppliers who do not meet our requirements are not awarded contracts”. The carmaker is integrating human rights into its “compliance management system” and would this year “conduct internal assessments of Volkswagen-controlled entities in China”, it said.

The wider geopolitical environment may take these decisions out of European companies’ hands, according to Janka Oertel, head of the Asia programme at the European Council on Foreign Relations. China’s shift to autonomy in key industries should be “a concern for European companies” targeting the Chinese market, she said.

Oertel warned it was a “risky choice” to assume Beijing would continue to open up its economy after tit-for-tat sanctions left the EU-China trade deal agreed in December hanging in the balance. There are signs that Brussels is hardening its position towards China. Next week the European Commission is set to unveil legislative powers to crack down on market-distorting subsidies from foreign governments, widely seen as a response to Beijing’s state support for its national champions.

The BDI is pressing the EU and Germany to use government procurement and investment screening as leverage to open China’s economy to fairer competition.

“It sounds like protectionism and we dislike that as we have always tried to be open,” Niedermark said. “But if nobody is following us then we need to step up our own toolkit.”