Illegal sand mining driven by a post-pandemic surge in infrastructure spending risks causing degradation to some of the world’s most vulnerable lakes and rivers, environmental researchers have warned.

Sand, mixed with cement to make concrete, is the most consumed material on Earth, apart from water. As the waning threat from the virus in countries such as China sparks renewed construction activity, there are fears that the criminal gangs who play a leading role in the industry will be spurred on to dredge even more sand from delicate ecosystems.

“Starting from now, we’ll see governments injecting a lot of funding into infrastructure to boost the economy, and that will trigger a lot of demand for sand and gravel,” said Pascal Peduzzi, head of the UN Environment Programme Global Resource Information Database in Geneva.

Peduzzi explained that lakes and rivers were damaged by sand mining, which can change the course of waterways, lower lake levels, erode banks and disrupt wildlife. “In some places, it’s been such a heavy load on these environments, it’s led to total ecological disaster,” he said.

Kiran Pereira, author of Sand Stories: Surprising Truths about the Global Sand Crisis, said many large projects had already begun under the cover of the global health crisis.

“Covid has had the effect of increasing the amount [of sand] that’s being extracted,” she said. “A lot of governments have used the pandemic as an excuse to push through projects that would not have gone through, like land reclamation.”

Sand found below lakes and rivers is better for making concrete than sea or desert sand, which is too rounded to bind with cement. Although sand appears plentiful, it takes thousands of years to form through erosion.

Reserves are being rapidly depleted as sand is mined more quickly than it can be replenished. Because the extraction is poorly regulated around the world and mining is often undertaken informally, the activity is dominated by organised criminal gangs in many areas.

A paper published in March in the journal The Extractive Industries and Society highlighted how the sand mining industry was “plagued by rampant illegality, a strong black market and intense violence”.

There is scant global data on the problem, in part because sand is usually mined locally near where it is used.

“It’s the natural resource that is the most exploited on the planet, and yet we know very little about where it comes from and who uses it,” said Dave Tickner, an adviser at WWF, the conservation group. “It’s an amazingly low-profile issue considering its importance to our daily lives.” 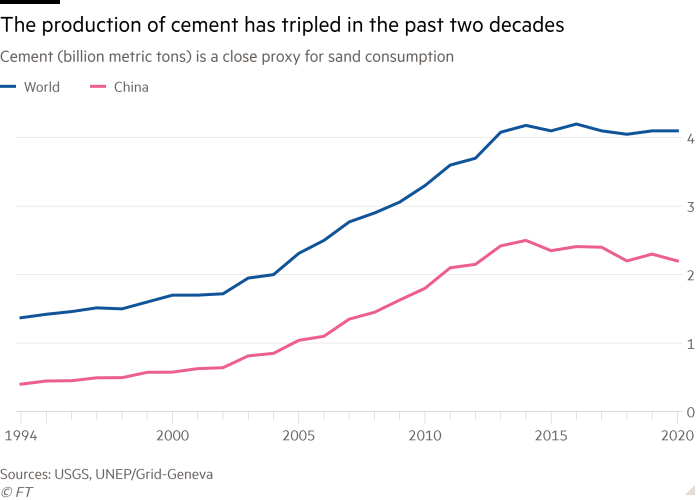 The problem is most acute in China, the world’s biggest sand consumer.

Beijing has relied on state-dominated industries and infrastructure spending to spur a post-pandemic recovery. China accounts for 58 per cent of global sand and gravel demand, according to UNEP data.

High demand and the lure of big profits have attracted criminals who resort to elaborate schemes to conceal their activities. They often operate at night using boats whose dredging apparatus is hidden by the water.

A crackdown by Chinese authorities on illegal sand mining on the Yangtze river this year uncovered two dozen gangs involving more than 200 people and revenues of more than Rmb17m ($2.6m).

The interest in environmental protection signified by the crackdown comes as the country prepares to host a UN biodiversity summit this year. “They [China] have really stepped up monitoring and enforcement. They’ve really clamped down,” said Pereira.

Yet environmentalists say what has been exposed is just a fraction of a vast illegal mining industry. China’s insatiable demand for sand has also taken on a geopolitical edge: aggressive sand mining around the Taiwanese island of Matsu has become a significant point of friction between Beijing and Taipei.

Yu Bowen, a researcher at the China aggregates association, said coastal provinces such as Fujian, across the strait from Taiwan, had thriving illegal markets.

“Companies bid to take charge of an area [of the sea] and then it’s theirs to use,” he said. “It could be one ship or 10 going to extract sand. That makes it hard to crack down.”

Mette Bendixen, an assistant professor of environment and geography at Copenhagen University in Denmark, said the hotspot for sand demand would shift from Asia to Africa in the coming decades.