The number of US mutual funds is shrinking at the fastest pace in at least two decades, reflecting cost pressures and consolidation across the investment industry and strong competition from exchange traded funds.

Consolidation among asset managers in recent years has hastened the process of closing and merging funds that fail to attract sufficient flows from investors.

After peaking at 9,616 in 2018, the number of outstanding US mutual funds has fallen towards 9,000, the lowest level since 2013, according to data due to be released this week by the Investment Company Institute.

“It is not surprising to see funds being liquidated or merged during periods when markets are volatile,” said Shelly Antoniewicz, senior director of financial and industry research at the ICI.

“Even the large fund operators are under a lot of competitive pressure and they are unable to keep a fund open that is not gaining investor traction.”

A total of 644 mutual funds were shut or combined last year, the highest figure since 2009, according to the ICI. Meanwhile, the number of mutual fund launches, 268, was the lowest since the ICI began compiling data in the late 1990s.

Mutual funds have been a staple of the US retail investment landscape for decades but their popularity has eroded in part due to the rise of the ETF, which can be bought or sold as easily as stocks and typically charge lower fees. Half the money in mutual funds flows from retirement accounts such as 401k plans and IRAs.

The number of new ETFs rose to a record 313 in 2021 although, reflecting their growing maturity, there were also a record 182 ETF liquidations last year. The downward trend in mutual funds has continued into 2021: so far this year, 64 have been liquidated and 53 have been merged, according to Morningstar.

Last month, T Rowe Price merged two US large-cap equity funds, and the asset manager said client transfers from mutual funds to other portfolios, including trusts and separate accounts, totalled $5.6bn for the first three months of the year.

Invesco is currently merging funds in the wake of its 2018 acquisition of Oppenheimer funds.

“There is still a place for mutual funds,” said Todd Rosenbluth, head of ETF and mutual fund research at CFRA. “Some investors prefer the structure and they remain the default option in retirement accounts until 401k plans are allowed to hold ETFs.” 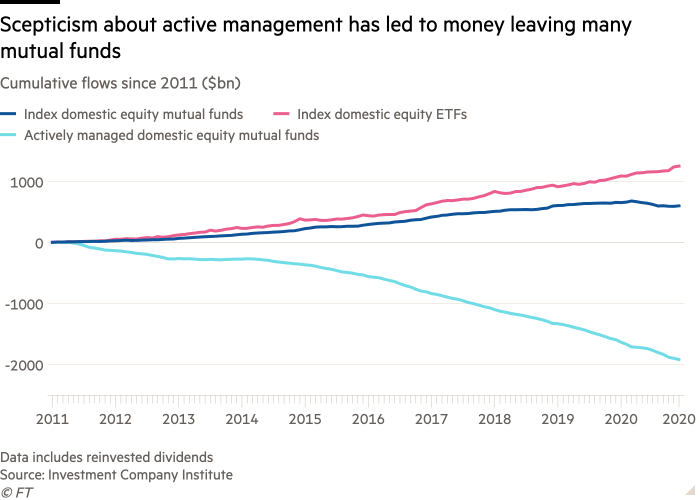