At a recent campaign stop, as she high-fived school children through the bars of their classroom windows, the rising star of Spanish politics linked the surge in her support to Madrid’s yearning to be free.

“It’s a little bit like an explosion, from every social class, from every corner of society, in favour of freedom, in response to such a difficult time,” Isabel Díaz Ayuso told the Financial Times, referring to the pandemic’s impact on Madrid and voter fatigue at government restrictions.

The 42-year-old is a phenomenon, eclipsing the national leader of her conservative People’s party, Pablo Casado, whose series of attempts to reposition himself contrasts with Díaz Ayuso’s clear ideological message, charisma and semi-sceptical stance on Covid curbs.

“Freedom” is the motif of her campaign — the single word fluttering on her party’s banners as she seeks re-election as head of Madrid’s regional government in a May 4 vote overshadowing everything else in national life.

The polls suggest that Díaz Ayuso will virtually double her tally of seats in the regional assembly — increasing the PP vote by almost 20 percentage points — although she may need the far right Vox party to secure a majority. Analysts argue that the consequences of such a success will be profound, and felt at the national level.

“The Madrid election is set to determine the future of the right in Spain,” said Máriam Martínez-Bascuñán, a political scientist at the autonomous university of Madrid. “Ayuso is putting forward her own model of conservative politics — further to the right, even Trump-style in the way she comes out with attention-grabbing statements that distract from discussions about policy.”

Two themes stand out in Díaz Ayuso’s discourse: the inferiority of the left and the superiority of Madrid.

When Pablo Iglesias, the leader of the radical left Podemos grouping, quit his post as deputy prime minister to run in the Madrid race to shore up his party’s flagging fortunes, Díaz Ayuso exclaimed: “Spain owes me one”. On another occasion she joked that “when people call you a fascist you know . . . you are on the right side of history.”

She has previously complained that it is “very unfair to treat Madrid like other regions” and last week said that part of what made Madrid so free was that “you can change partners and your ex will never find you again.”

“You shouldn’t compare Ayuso to Thatcher or Merkel but more to Reagan,” said a former PP cabinet minister. “She connects with people, she comes out with memorable phrases, she has charisma.”

Díaz Ayuso was little known when she first won the Madrid post two years ago after an election in which the Socialists topped the poll but proved unable to form a coalition. 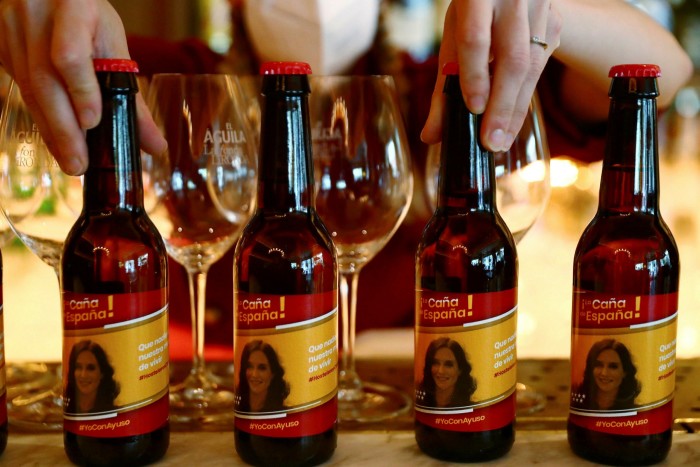 Ridiculed in the past as the woman who among other duties had run the Twitter account of a previous Madrid boss’s pet dog, in this race she has trained her fire not on her Socialist rival but his party’s chief: Spain’s prime minister Pedro Sánchez.

Díaz Ayuso is one of the few regional leaders in western Europe who has bridled against what she depicts as excessive coronavirus curbs, moving closer than many of her counterparts to the sceptical stance taken by the governors of Texas, Florida and South Dakota in the US.

Her critics say she let infection rates get out of hand after a long period of PP rule during which there was insufficient investment in the health system.

While at the beginning of the pandemic the 6.6m-strong greater Madrid region had some of the worst coronavirus infection and death rates in Europe, at present incidence is among the highest in Spain but well below levels in countries such as France, the Netherlands, Sweden and Poland.

“Madrid’s population density means that if we had a zero level of infection, people wouldn’t have a living,” Díaz Ayuso said. “So we’ve opted for an intermediate model that’s working, so that people can go on living their lives and aren’t ruined for life — but where there still are restrictions . . . For example, it is very tough for Madrid to close down at 11 o’clock at night. Probably in other provinces, everything finishes at 8pm.”

Díaz Ayuso triggered the election after two years of an uncomfortable coalition with the centrist Ciudadanos party. In this race, that grouping’s support appears to have collapsed, with the PP grabbing almost all of their votes. The election also looks set to deliver sombre news for Iglesias and the leftists of Podemos, now running in fifth place.

Meanwhile, opinion polls suggest that the Socialists are losing votes to an upstart leftwing party called More Madrid. A humbling defeat to Díaz Ayuso in such a high profile race would do nothing to increase the Sánchez’s government political capital, though the left still holds out hope that the combined forces of the PP and Vox will fall short of a majority.

The Socialists are now saying that the election comes down to a choice between “fascism and democracy” — a reference to the possible crucial role Vox could have in propping up Díaz Ayuso after the vote.

The turbulence caused by the race could also hit Díaz Ayuso’s own PP, a party in which her profile seems set to rise still further. One poll last week indicated that in a general election Casado, the PP’s national leader, could only command the support of three quarters of Díaz Ayuso’s voters.

That was the message that came through during the Madrid boss’s recent campaign stop, at a Catholic school. “I like what she does for Madrid; my husband still has work because she hasn’t closed the hospitality industry,” said Maria, a member of the kitchen staff who had just posed for a photo with Díaz Ayuso. “Compared with Casado, she would definitely win more votes.”