A 10% drop or at least a pause could be looming for the S&P 500. Take shelter in these sectors, says veteran strategist

Legendary investor Warren Buffett told his faithful over the weekend that the U.S. economy is “red hot,” suggesting money in an index fund is better served than picking stocks. That advice comes as investors face what could be a seasonally weak period for equities.

The “sell in May and go away” adage dictates that from now to October is often a less profitable and more bumpy time for stocks, partly as the weather warms up and big traders spend more time vacationing, leaving behind junior traders and opening the door to volatility.

A stock hiatus doesn’t seem like a crazy idea right now. Hovering near all-time highs, the S&P 500
SPX,
+0.27%
has gained for three straight months and the economy is indeed rebounding hard from the pandemic. And pent-up demand for a summer vacation and plenty of vaccines in the U.S., at least, justifies going away for a little while.

But instead of selling, “curb your enthusiasm” may be better advice to follow for the next six months, says our call of the day from Stifel’s head of institutional equity strategy, Barry Bannister. He predicts the S&P 500 is headed for flat to down 5% to 10% for the next few months.

He bases that on the “usual seasonality math” that predicted a 26% gain from November to April 30, 2021, while we got a 28% bump. Others have been chiming in on seasonality, such as UBS and LPL Financial who both urge investors to stick around. Here’s Bannister’s chart:

Bannister’s next chart shows how 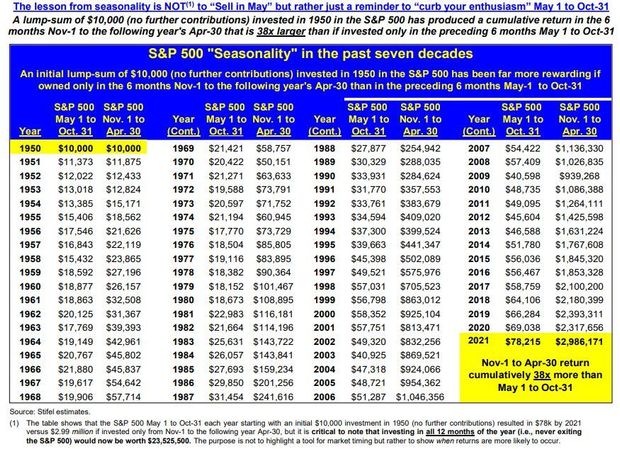 And if things turn out as Bannister expects, he said investors should get investors to get selective about sectors, says Bannister.

“If May through Oct-2021 is seasonally weak, we note that S&P 500 defensives (staples, healthcare, utilities, telecom services) do typically outperform cyclicals (note cyclicals include technology) in the same period, albeit usually with
falling yields. S&P 500 seasonal strength the six months since Nov-1, 2020 also appears to have front-loaded returns, diminishing May-Oct 2021,” he said. 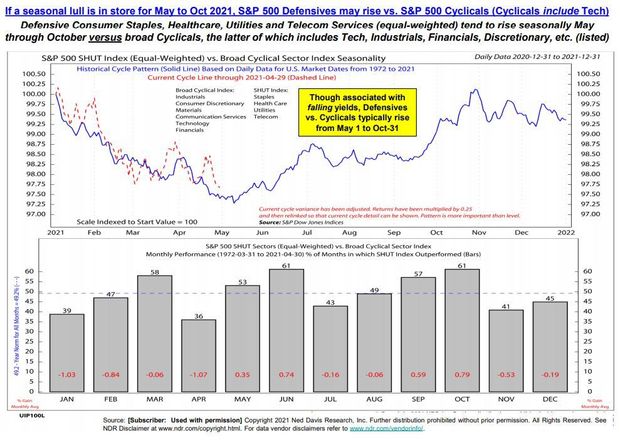 Bannister says if he’s wrong, the “only bubble path” is a much higher price/earnings ratio based on yield repression.” And as for those who “see post-COVID-19 as a ‘Roaring 1920s’ meme,” he noted the market P/E has already reached the Oct-1928 trend-adjusted level, which came just 12 months before the Oct-1929 crash. 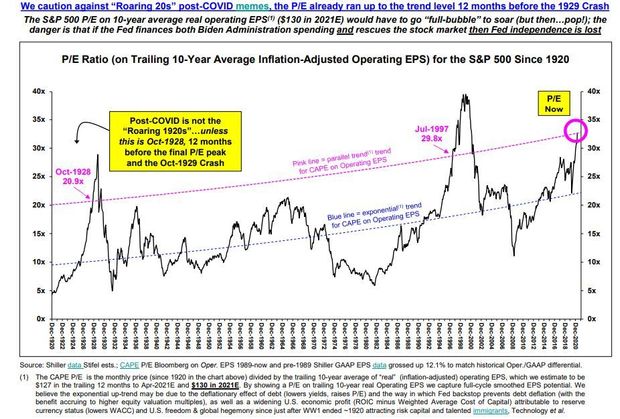 Ethereum is red hot and more data is coming

Taking your eyes off the screens this summer may be less advisable if you’re hot on cryptocurrencies. Ethereum
ETHUSD,
+1.71%
has topped $3,000 for the first time, with gains outpacing those of bitcoin
BTCUSD,
+0.13%
so far this year. Berkshire Hathaway’s vice chairman Charlie Munger had nothing good to say about cryptos at the shareholder meeting on Saturday.

May is off to a strong start, with gains for U.S. stocks, led by a 200-point Dow gain, with the S&P 500
SPX,
+0.27%
and Nasdaq
COMP,
-0.48%
also rising. European stocks
SXXP,
+0.58%
are climbing in step with Wall Street, but London
UKX,
+0.12%
is out for a holiday. A bunch of Asian markets were closed, but those that were open fell, as investors fretted about rising COVID-19 cases and low vaccination rates.

Another busy week for earnings kicks off with do-it-yourself home retailer Lowe’s
LOW,
+1.50%
reporting a profit, with shares up slightly, while shares of makeup giant Estee Lauder
EL,
-7.93%
are down as sales fell short. Chip supply group ON Semiconductor
ON,
-3.67%
is also expected to report before the bell on Monday.

Shares of Tesla
TSLA,
-3.46%
are pitching south after a German trade magazine said production at the electric car maker’s new gigafactory outside Berlin is facing another six-month delay.

BRK.B,
+1.54%
said it swung to a first-quarter profit on stock gains and better results from its insurance business. Among the highlights from Saturday’s shareholder meeting, Chairman and Chief Executive Officer Warren Buffett defended selling airlines, discussed a “casino”-like stock market, and warned over special-purpose acquisition companies. Meanwhile, Buffett may have named his successor.

Epic Games and Apple
AAPL,
+0.82%
will square off in court on Monday. The maker of the popular Fortnite online game has accused the iPhone maker of abusing its App Store for anticompetitive purposes.

Read: If you missed out on the SPAC craze you’re probably better off

The EU has proposed lifting restrictions on non-essential travel to the region for vaccinated foreign nationals who hail from a country that has a good epidemiological situation.

Manchester United soccer fans invaded the pitch on Sunday to protest the club’s owners, who had backed the failed Super League.