Ten years ago commodity markets were reaching peak supercycle exuberance as commodities trader Glencore readied itself for a blockbuster $60bn listing on the London Stock Exchange.

A decade later, a broad upswing in the price of key raw materials is reviving talk of a sector-wide “structural bull market” in commodities fanned by strong demand from China, government spending on post-pandemic recovery programmes and bets on the “greening” of the global economy.

“If we can hopefully see a relatively quick resolution to the [pandemic] situation in India, then in our lifetime we have not seen a macro economic set-up like this,” said Saad Rahim, chief economist at Trafigura, one of the world’s biggest independent commodity traders.

“We have gone from China being the only story in commodities for the last 10 years to now the rest of the world picking up the baton and being real contributors to the demand side of the equation.”

The past week has seen iron ore, the key ingredient needed to make steel, palladium, used by carmakers to limit harmful emissions, and timber all hit record highs. Key agricultural commodities including grains, oilseeds, sugar and dairy have also jumped up, with corn prices above $7 a bushel for the first time in eight years.

At the same time copper, the world’s most important industrial metal, traded above $10,000 for the first time since 2011, while soyabeans hit an eight-year high. The S&P GSCI spot index, which tracks price movements for 24 raw materials, is now up 21 per cent this year.

After being out of favour for most of the past decade, sector specialists’ predictions of another supercycle — a prolonged period of high prices as demand outstrips supply — have lured investors.

The sector has also drawn support from fund managers seeking assets that will benefit as the global economy picks up speed after the pandemic, and that can also act as a hedge against rising inflation.

“President Biden has now proposed two additional stimulus plans on top of the one he has already passed. If any of that comes to pass you are just supercharging this whole thing. This is just getting started,” said Rahim.

China’s rapid recovery, still the world’s biggest consumer of raw materials, and increasingly Europe and the US, where the housing market is booming, have fuelled demand. Low inventories and Covid-related supply chain disruptions have added further fuel to the fire.

“I don’t know if we have seen anything like this before,” said Ulf Larsson, chief executive of Swedish pulp and timber company SCA, which announced a 66 per cent increase in first-quarter net profit on Friday. “We are in some kind some of perfect storm.”

A suite of raw materials needed for electric-vehicle batteries and electric motors, from lithium to rare earths, has also been swept up in the euphoria. China’s appetite has driven prices for lithium carbonate and lithium hydroxide to rise by over 100 per cent this year, according to Benchmark Mineral Intelligence, following almost three years of decline. The rare earth neodymium-praseodymium (NdPr) oxide, used in electric motors, is up by almost 40 per cent, as is cobalt, a battery metal.

“You have an EV supercycle and you add a real commodity supercycle on top of that — it’s game on for the miners,” Simon Moores, managing director at Benchmark Mineral Intelligence, said.

Commodities tied to petrol cars are also rallying. The price for palladium, a metal used in catalytic converters to filter exhaust gases, rose to a record above $3,000 an ounce on Friday, as Europe and China phase in stricter emissions standards.

That is likely to outweigh a slowdown in global internal-combustion engine car sales, according to analysts at Jefferies.

Oil prices have also been strong, recovering to pre-pandemic levels above $65 a barrel since the start of the year. Though demand is still depressed by limited international travel it has picked up as economies have reopened. Opec and allies like Russia are continuing to restrict supplies — only slowly adding barrels back to the market to bolster the price. 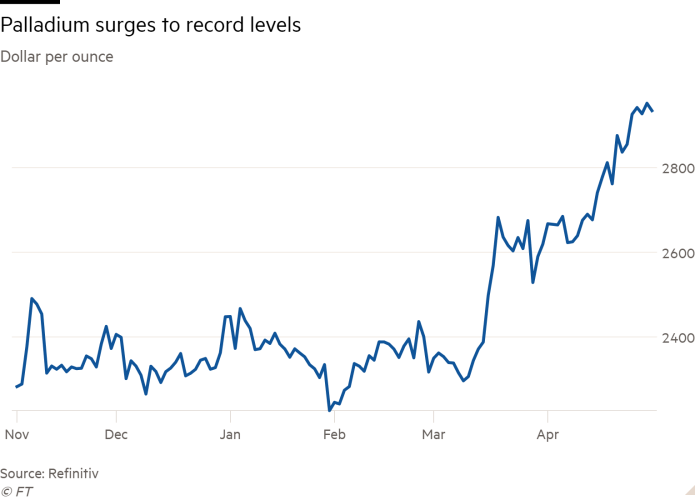 Goldman Sachs said this week that it expected to see oil prices hit $80 a barrel in the second half of this year, warning that there could be a large supply deficit this summer as vaccine rollouts accelerate and people drive to their holidays, boosting demand by more than 5 per cent globally.

Though the Opec+ group could restore production if prices go too high, some analysts are concerned by the longer-term supply outlook as energy majors pivot away from fossil fuels.

Christyan Malek, JPMorgan analyst, has argued that a serious supply gap could emerge in the next few years, with about a $600bn shortfall predicted in capital expenditure between now and 2030. There is a “risk of oil prices overshooting as non-Opec supply falls short,” Malek said.

Video: How strong is the commodities rally? | Charts that Count

How long the commodity frenzy will last, however, is up for debate. “This is a mini supercycle,” Alex Sanfeliu, the head of Cargill’s world trading group, said of the increase in agricultural commodities. “I don’t think it is going to last as long as the last one. Supply and demand react faster now.”

A Shekar at Olam International, a leading agricultural trader based in Singapore, said he did not see a continuous rise in food commodities. However, he predicted that underlying demand would remain strong in the next six to 12 months as consumers eat out following a year of lockdowns. “That may drive pricing further,” he said.

Some cast doubt on the notion that we are entering a supercycle at all. “We think the price rally is likely to continue for a bit, but this is more of a business cycle upswing rather than a supercycle,” said Jumana Saleheen, chief economist at CRU.