EU and India set to revive talks on trade deal

The EU and India plan to revive long-stalled talks on a comprehensive trade deal as they seek to deepen economic ties and respond to China’s rise.

The two sides could announce as soon as Saturday the relaunch of negotiations that were suspended in 2013 amid disagreements over tariff rules for car parts and free-movement rights for professionals.

The resumption of talks between two of the largest economies in the world has risen as a priority for both sides in recent months as they grapple with the challenges posed by the rise of China and its model of state-backed capitalism, and the economic damage wrought by the coronavirus pandemic.

The move was discussed on a call on Monday morning between European Commission president Ursula von der Leyen and Indian prime minister Narendra Modi, according to a senior commission official.

Assuming the commission does not encounter any last-minute hitches with New Delhi or resistance from EU member states, the restart of talks will be announced at the end of an EU-India virtual summit in Porto on Saturday. “There is optimism, but it is not a done deal,” said an Indian government official.

Alongside reviving the trade talks, Brussels and India were planning to launch negotiations on a separate investment treaty and on a deal to protect regional speciality foods, said the senior commission official. The two sides are also working on improving their infrastructure connections.

“There is clear momentum to strengthen our strategic relations on trade, digital, climate change and multilateralism,” Von der Leyen wrote on Twitter after Monday’s call. “I’m encouraged by the prospect of intensifying our trade and investment relations.”

The fresh momentum comes at a time when the UK is pushing to secure its own trade deal with India.

Previous attempts by the EU and India to reach a pact foundered despite intensive work between 2007 and 2013. Problematic issues included India’s reluctance to ease access for EU lawyers and to further open up its market to European car parts. New Delhi was frustrated by the EU’s unwillingness to offer more generous rights for its professional service providers to work in Europe.

“It’s a difficult country to negotiate with because they are fairly protectionist,” said David O’Sullivan, a former director-general for trade at the European Commission. “They tend not to do massive liberalising trade deals. If you look at any they have done, they are not what we would call deep and comprehensive.”

O’Sullivan noted that there would be a “strategic first-mover advantage” for the EU in securing a deal. “We would be the first bloc to conclude a comprehensive FTA. That is a reason in itself to look at all the specific problems [in the talks] with a bit of context,” he said. 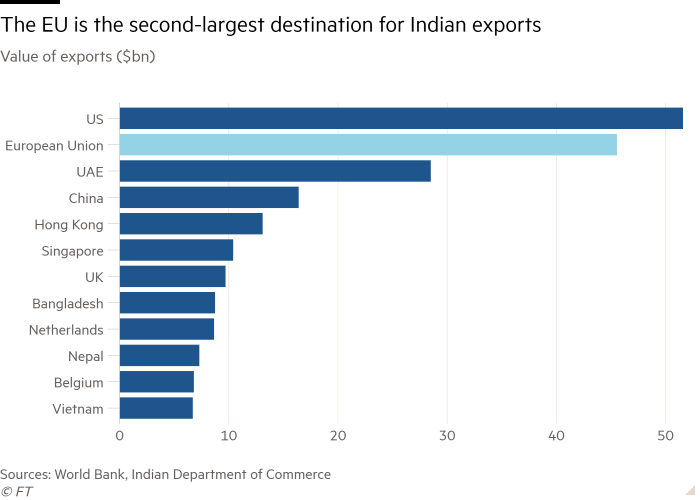 Officials believe the prospects for a deal are now more propitious than 10 years ago, as India seeks ways of responding to the increasing economic power of China in the region. New Delhi last year decided against joining 15 other countries, including China and Japan, in a regional economic partnership.

“This was a game-changer” said the senior commission official. “We see geopolitics shifting,” adding that there was now more “political impetus” behind the talks.

The senior official said progress of the talks would depend on trust-building measures from the Indian side on market access, including smoothing movement rights for European professionals to visit production plants in India.

“I hope if they restart that there are grounds for optimism that we can eke out a bit more to seal the deal,” O’Sullivan said. “It would send a positive signal to the global community, and to the India-Pacific strategy.”