Maduro struggles to make good on his grand vaccine promises

A few weeks before Christmas, Venezuela’s president Nicolás Maduro made a major announcement about his plans to tackle coronavirus. His vice-president, Delcy Rodríguez, had just arrived back from Moscow bearing seasonal tidings of comfort and joy regarding Russia’s Sputnik V vaccine.

“We have guaranteed more than 10m doses of vaccines for the first quarter of next year,” Maduro assured the nation. “Our aim is that in January, February, March, April or May — at least 10m vaccines.”

Reality has proved somewhat different, as Maduro’s government struggles to secure enough doses to cover even the most vulnerable of its people.

There is no sign that Beijing or Moscow are giving preferential treatment to their socialist ally. Venezuela has received 380,000 of those Russian doses — just 3.8 per cent of what the president promised — and 500,000 doses of the Sinopharm vaccine from China.

It has vaccinated just 1 per cent of its population, the lowest share of any nation in South America. At that rate, it will need over a decade to reach herd immunity.

“Neither Russia nor China are offering Maduro the help he would like at this difficult moment, because they have other priorities,” said Dimitris Pantoulas, a political analyst in Caracas. “And also, Maduro simply doesn’t have the money to pay them. It’s a big problem for both Venezuela and Maduro. The country is becoming a secondary priority for the Russians.”

Maduro says he has things under control. Last month his government surprised many by saying it had found $120m to pay for more than 11m doses of vaccines via the Covax mechanism, set up by the World Health Organization and its partners to help poorer nations access Covid drugs. That should be enough to vaccinate 20 per cent of the population.

The cash-strapped government did not say where it had found the money, although Maduro said it was “liberated from the blockade”, suggesting that the funds had somehow been freed from sources previously under foreign sanctions. He said the origin of the money would become clear “in good time”.

The announcement appeared to catch the US-backed opposition, led by Juan Guaidó, off guard. It too had promised to pay for vaccines, using money from Venezuelan bank accounts in the US frozen under Washington’s sanctions regime.

Guaidó’s team had been talking to Maduro’s government — a rarity in itself — over how to pay for, import and properly store the vaccines, but the talks stalled when Maduro said he would not accept doses of AstraZeneca because of fears over blood clots.

Shortly afterwards, the government unveiled its unilateral Covax payment, and the negotiations fizzled out.

Guaidó appears determined to ensure that the same thing does not happen again. He has since approved the release of $100m from frozen bank accounts under his control in the US to pay for any future vaccines.

Meanwhile, Venezuela’s health workers are growing increasingly frustrated by the scarcity of drugs and lack of a coherent vaccination plan.

“Where I live, no one’s been vaccinated, and in less than a month a dozen of my neighbours have died,” said Irma Madriz, 62, who has worked in Venezuela’s public health system for 35 years.

“I want the vaccines to arrive but I want them for everyone,” she said as she joined a small group of health workers and opposition politicians who staged a protest in Caracas on April 17 demanding government action.

“With the doses that have arrived so far, at least 300,000 health workers could have been vaccinated,” said Ana Contreras, president of the Caracas College of Nurses. “It’s very serious that frontline workers are not being protected.” 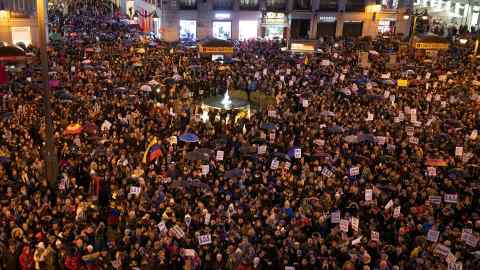 The arguments continue over how many Venezuelans have contracted coronavirus and died.

The government has registered 192,000 cases and a barely credible death toll of 2,065 out of 28m inhabitants. That is 74 deaths per million people, far lower than in any other major Latin American nation. In Brazil and Peru, the figure is over 1,800 per million.

Last year, New York-based NGO Human Rights Watch said Venezuela’s official Covid figures were “absolutely absurd and not credible”. The Institute for Health Metrics and Evaluation, a research centre at the University of Washington, recently estimated the number of new Covid cases in Venezuela as over six times higher than official figures.

Meanwhile, Maduro is placing his faith in two Cuban vaccines, Soberano-2 and Abdala, both in phase 3 clinical trials, and a second Russian vaccine, EpiVacCorona.

In that pre-Christmas address, the president promised that “Venezuela is going to make the Russian vaccine [Sputnik] here in Venezuelan laboratories”. He has since vowed that his country will also manufacture Cuban vaccines.

“Needless to say, there is no sign of any of that happening,” political analyst Pantoulas said.