Zelensky forced to ‘face reality’ over peace process with Russia

Ukraine’s president Volodymyr Zelensky is struggling to salvage a deadlocked peace process that was supposed to end a simmering conflict with Russian-backed forces in the country’s far east.

Moscow’s massive military build-up on Ukraine’s eastern border and in occupied Crimea last month, followed by a partial troop withdrawal, was “from the Kremlin’s perspective a clear success”, Kurt Volker, former US special representative to Ukraine, wrote last week. Russia’s sabre-rattling left “Ukraine looking vulnerable, the west having demonstrably shied away from a military show of force and [Vladimir] Putin having strengthened his position” in the region.

Zelensky, who was elected in 2019 on a promise to end the war in the Donbas region, has few options for breaking the deadlock, having failed to galvanise Kyiv’s western allies behind further economic sanctions against Russia and with Washington’s willingness to engage in a new diplomatic effort unclear.

The former comedian is finding it hard even to get Putin to the table for peace talks alongside leaders of western countries backing Kyiv.

Zelensky has been forced to acknowledge that the Russian president may not, for now, want peace in Donbas where 14,000 combatants and civilians have been killed — unless Kyiv agrees to terms politically unacceptable to any Ukrainian leader.

A Ukrainian soldier near the front line in the town of Pisky, Donetsk © Aleksey Filippov/AFP via Getty Images

“Ukraine is committed to peace and is ready to do everything in its power to achieve such peace,” said an adviser to the president. “However, it takes two parties to want peace and Moscow’s recent belligerent behaviour cast significant doubt on its intent,” the adviser added.

Zelensky told the Financial Times last week that he wanted the US and UK to join the so-called Normandy group of Germany, France, Ukraine and Russia to help break the impasse.

He also called for changes to the Minsk peace accord negotiated by the Normandy four, which has not been implemented, with Kyiv and Moscow at loggerheads over terms and sequencing. But the Kremlin refuses to renegotiate the deal. “There is no way of changing it without, in fact, terminating it,” Dmitry Peskov, Putin’s spokesman, said last week in response to Zelensky’s appeal in the FT.

Paris and Berlin, meanwhile, fear walking away from the Minsk accord could provoke Moscow. Scrapping it would also make it harder to sustain EU sanctions against Russia.

Andriy Yermak, Zelensky’s chief of staff, admitted in a television interview last week that Kyiv did not have a chosen diplomatic strategy.

“It is necessary to continue working in all directions and in all formats,” he said. “Because in the end we do not know what format will bring peace to our land, when we can return all our territories, all our people and end the war,” Yermak added.

In his first year as president, Zelensky scored a quick victory after negotiations in Paris with Putin, French president Emmanuel Macron and German chancellor Angela Merkel. He convinced Russia and its separatist proxies controlling two breakaway regions in Donbas, Ukraine’s industrial heartland, to exchange hundreds of prisoners of war. However, the process has since stalled and a fresh ceasefire agreed in July 2020 broke down earlier this year. 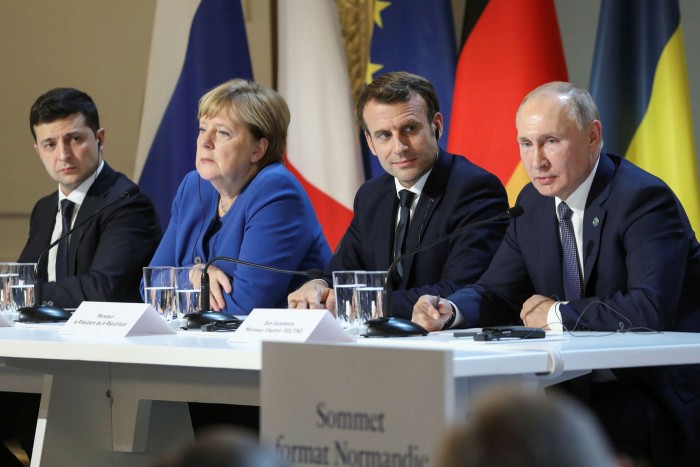 Kyiv insists it is not required to grant permanent autonomy to the breakaway areas, fearing such a status would thwart its aspirations to join the EU and Nato. Moscow and its Donbas proxy “republics” have refused to yield control to Kyiv over the region and border before elections can be held as a step towards reintegration with Ukraine.

Zelensky last month pushed for one-to-one talks with Putin, something he has avoided so far during the conflict. Putin declined Zelensky’s request to meet on the front lines and offered to discuss bilateral relations — not the Donbas war — if Zelensky came to Moscow. Putin added that on the issue of Donbas, Zelensky should hold talks with leaders of the Russian-backed breakaway republics, which the Ukrainian president refuses to do.

“Putin demonstrated that he has not the least bit of desire to yield anything of interest to Zelensky let alone reach a peace agreement,” said Danylo Lubkivsky, director of the Kyiv Security Forum. “Only collective international pressure can force Putin to free these captive Ukrainian territories.”

Zelensky hopes that a bigger role for US president Joe Biden, either alongside France and Germany or in bilateral talks with Putin, might help to nudge Moscow towards compromise. Russian forces take part in a military drill at the Opuk training ground not far from the town of Kerch, on the Kerch Peninsula in the east of the Crimea © Russian Defence Ministry/AFP via Getty Images

“It’s strategically important to bring in Biden . . . America should be back at the table to restore Ukraine’s territorial integrity on two tracks, Crimea and Donbas — because this is the matter of global security,” Lubkivsky added.

But Kyiv is unclear how forcefully Washington will commit to a new peace initiative. While Biden is a friend of Ukraine, his administration contains Obama-era officials who were sceptical of deeper US involvement six years ago. Secretary of state Antony Blinken will visit Kyiv on May 5.

How the US and other western powers could help Ukraine regain its territorial integrity was a “vexing problem”, George Kent, a senior Department of State official, told the Kyiv Security Forum last week. The challenge, he said, was “to try to change Russia’s cost calculus and its behaviour”.

One way the US could increase pressure on Moscow would be to extend US sanctions on dollar-denominated Russian debt issuance to the holding of such debt, Kent said. 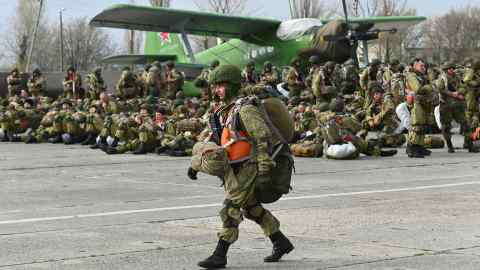 But changing Russian behaviour “is not easy. And no one has come up with a winning solution.”

Sarah Lain, a Kyiv-based researcher at the Royal United Services Institute, said even just expressions of western solidarity with Kyiv were important. Many capitals now see the Ukraine-Russia conflict as “part of their Russia policy” rather than some bilateral dispute.

“This is important for Zelensky’s standing,” she added.

Maria Zolkina, an analyst at the Kyiv-based Democratic Initiatives Foundation, said “the only chance that Russia under Putin could return control over these territories at acceptable terms for Ukraine is if Russia finds itself under deep financial and technological constraints”.

“But the problem of the west is that nobody will impose such sanctions, worrying that it will only increase Russia’s hostilities,” she added.

Some Ukrainian analysts and officials are resigned to a long, frozen conflict and say Kyiv’s best strategy is to rebuild its economy and modernise its state. A Ukrainian official described it as the “West German strategy”: focus on outlasting Putin and forging peace after a new leadership comes to power in Russia, but from a position of relative strength.