Centuries from now, our descendants may look back on this decade as the one in which the chances of mitigating irreversible climate damage were lost. As US President Joe Biden told the virtual leaders summit on climate last month, “This is the decade we must make decisions that will avoid the worst consequences of a climate crisis.” Global emissions must turn down now if we are to be reasonably confident of limiting the increase in the Earth’s average temperature to no more than 1.5 degrees above pre-industrial levels. We have been talking about doing this for decades, to no effect. Now, we must act.

The good news is that Biden’s election has transformed the chances of achieving something real this decade. The bad news is that the transformation is from zero to only a modestly positive number. This gloomy perspective is not universally shared: Jeffrey Sachs of Columbia University, for example, is far more optimistic, arguing: “The summit represents a tipping point. The world’s largest economies — the United States, Canada, the European Union, China, Japan, Korea, India, United Kingdom, Brazil — are finally aligning around the goal of deep decarbonisation, meaning the shift of the energy system from fossil fuels (coal, oil and natural gas) to zero-carbon sources (solar, wind, hydro, geothermal, biomass and nuclear).”

I hope Sachs is right. But it is vital not to be complacent: time is limited if the trend in emissions is to be turned down decisively, while the political and economic challenges remain huge.

Certainly, the recent shift in the US position was a necessary condition for global action. But it is far from sufficient. Everybody knows that US policy could again reverse, because Republicans remain fiercely opposed to decisive action. Moreover, as I noted this week, decarbonising production in one country is not the same as decarbonising globally, since emissions might merely be shifted abroad. Above all, even the US, albeit crucial, is not on its own decisive. While it is the second-largest emitter, it generates only 15 per cent of global emissions of carbon dioxide.

Indeed, in 2020, high-income countries together generated only 32 per cent of global emissions. China alone generated 30 per cent and China plus India 36 per cent. Still more important, on what the IMF calls a “business as usual” path, China would generate 40 per cent of the increase in emissions between 2020 and 2052, India 15 per cent and other developing countries (excluding Russia) 35 per cent. In the long run, these will be the decisive countries. (See charts.) 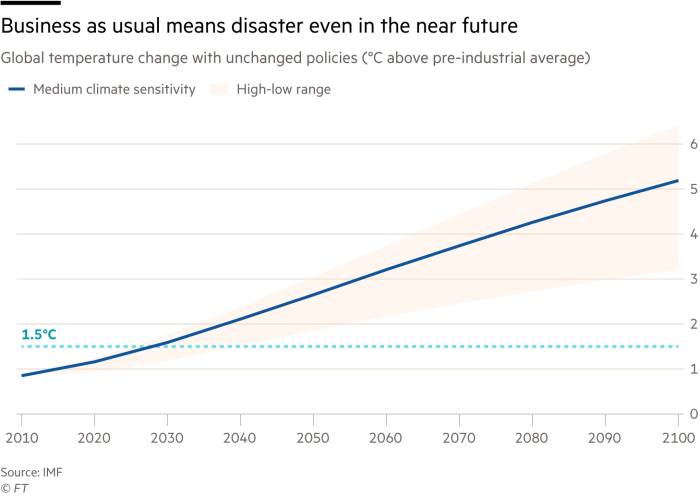 If the climate change summit (COP26) in Glasgow in November 2021 is to be the decisive change it needs to be, three things have to be agreed there. First, the high-income countries must mark themselves as credible leaders by committing to huge reductions in net emissions from their own output over the decade. Second, all parties must agree decarbonisation of all relevant systems by 2050, with significant progress by the 2030s. Finally, they must also agree to a package of incentives, disincentives and international assistance that will make achieving these ambitious goals feasible. We are still very far from this. While confidence is growing that this is at least feasible, at manageable cost, the outcome will depend on first-class policy and policy implementation across the planet. That is indeed a heroic demand. So how might this be done?

First, incentives. Raghuram Rajan of University of Chicago has proposed what he calls a “global carbon reduction incentive”. Each country that emits more than the world average of about five tonnes a head annually would pay into an incentive fund. The payment would be calculated by multiplying the excess per head by their population and the agreed incentive. Those that emit more would contribute and those that emit less would receive. But all would lose if they increased their emissions per head. So they would all face the same incentive to cut emissions. 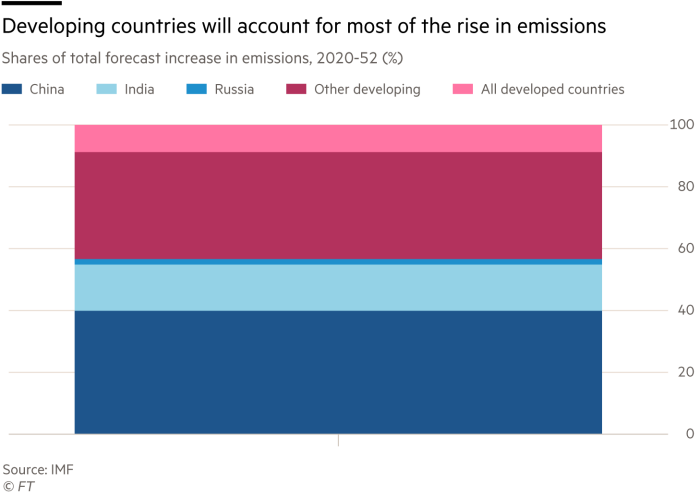 Second, disincentives. Alternatively (or in addition), countries that commit to imposing a price on domestic emissions would be permitted to put a border tax on emissions-intensive imports from countries that do not. If this did not happen, their production might merely shift abroad, with limited impact on global emissions. Such a border adjustment would no doubt be a rough and ready mechanism. It would also cause global friction. But a commitment by big high-income economies to introduce one might also lead to agreement on better policies, including carbon pricing, everywhere. 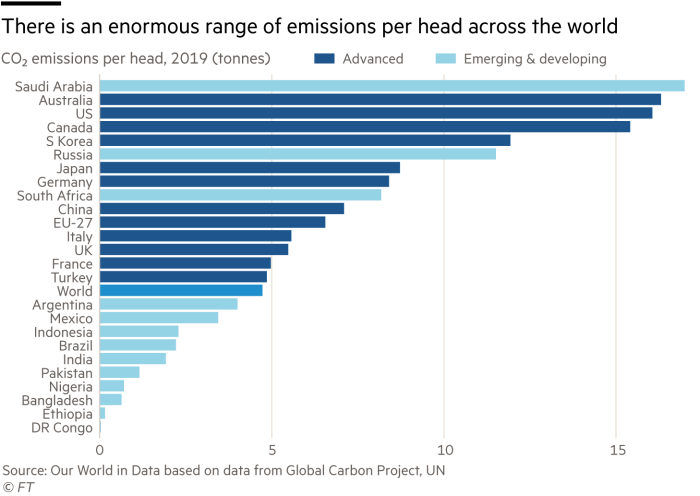 Finally, assistance. The IMF has argued that China, the EU, India, Japan and the US alone can deliver most of the needed change in emissions. But, in the long run, every country will need to make the shift towards a low-carbon economy. This is particularly true if one considers the role of natural systems in this and so of agriculture and forestry. It will be essential, therefore, to develop and spread effective technologies, practices and policies across the entire world. This will require aid, including for de-risking the needed investment in energy, transport, construction, agriculture and other systems. 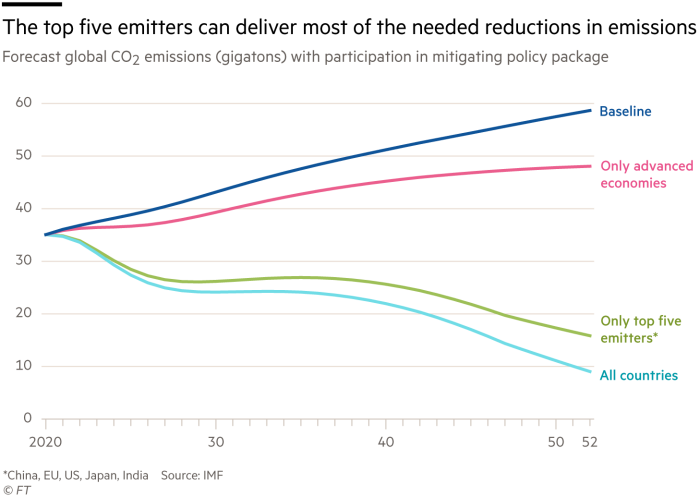 The next decade has to mark a start. But this programme will need to be rolled out over decades. This then will be the biggest effort at co-operation among countries, between private and public sectors, and across entire economies in history. It is necessary and feasible, but hugely complex. Yes, things look a bit brighter now. But do not underestimate the challenge. We will know quite soon whether there is any plausible chance of its being met.