Tiger Global Management, which has started the year with a blizzard of technology investments, wants to create another huge pool of capital for start-ups by raising a $10bn fund from investors.

So far in 2021, Tiger Global has taken part in 100 investment rounds in just over 120 days that have raised a total of $22.2bn for private tech companies, according to data from PitchBook.

Its latest venture fund comes just weeks after Tiger Global raised what eventually became a $6.7bn fund, after it initially sought $3.8bn. It told investors on a recent call that it would begin seeking the capital for its next fund, according to people briefed on the call.

The company’s relentless pace of dealmaking reflects the boom in private tech companies, with venture capitalists saying that Tiger Global has won the lead position in some financings by moving faster and offering higher prices than competitors.

“The opportunity set across public and private markets in our core focus areas of consumer, enterprise, and financial technology in the US, China, and India is very large, relative to the amount of capital we manage and evolving at a rate that is often hard to comprehend,” Tiger Global wrote in a letter to investors in February.

Investors poured a record $69bn into start-ups globally during the first quarter, according to PitchBook data, encouraged by a string of acquisitions and public offerings that have paid large dividends to early investors.

Tiger Global’s new fund would be the largest raised by an independent fund manager for minority investments in technology start-ups, according to PitchBook. The firm declined to comment on fundraising.

SoftBank, the Japanese conglomerate, raised $100bn for its first Vision Fund focused on technology investments, with about one-quarter of that total coming from SoftBank itself.

Insight Partners, a venture capital and private equity firm, is seeking $12bn for the newest fund in its flagship strategy this year, according to one person familiar with the plans. Unlike Tiger Global, Insight also invests in buyouts that give the firm a controlling stake in companies. 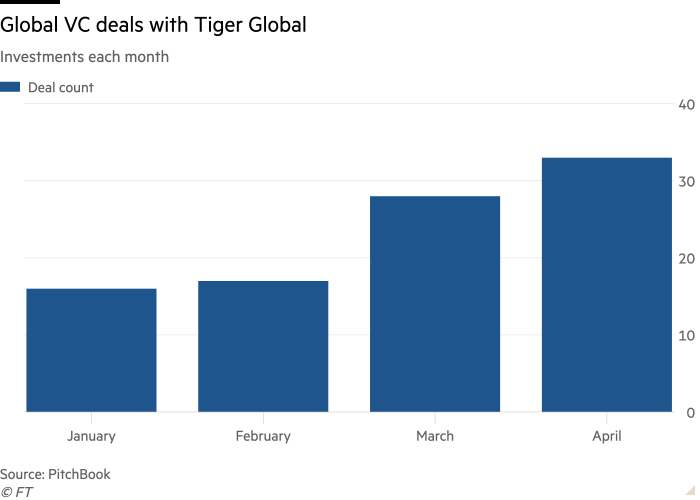 Tiger Global’s private investment funds distributed $2.2bn in proceeds last year, after fees, according to a letter to investors. The distributions mostly came from acquisitions, such as Uber’s $4.4bn purchase of the delivery start-up Postmates and Intuit’s $8.2bn deal for the fintech company Credit Karma, Tiger Global said.

The private investment funds returned 26 per cent annually after fees from 2004 to 2020, according to a letter to investors. That compared with a 21 per cent annual return in Tiger Global’s hedge funds during the past two decades.