Two of Europe’s most senior female central bankers have called for more decisive action to promote women’s careers in economics and improve decision-making at their institutions.

Isabel Schnabel, executive board member of the European Central Bank, told the Financial Times she was often the only woman in meetings. Having another woman present “makes such a big difference” to the tone of a discussion and how decisions are made, she said, noting the many “hidden barriers” to women’s careers, such as male-dominated selection processes and networks.

“If you do not want to wait 50 years until this imbalance is resolved, there is a certain degree of positive discrimination that seems to be inevitable,” she said.

Margarita Delgado, deputy governor of the Bank of Spain, told the FT: “I don’t have a firm belief in quotas, but I see their advantage [because to meet them] you need to draw up a plan . . . You can’t create women out of nothing. You need to have a strategy.”

The ECB was recently criticised by some media outlets for organising a conference with only female speakers, a decision Schnabel defended on Twitter. On that occasion, she also backed ECB president Christine Lagarde’s response to a press conference question which, Schnabel said, “seemed to have a misogynist undertone”.

The former University of Bonn economics professor told the FT that, given the choice between a male and a female applicant with the same qualifications for a position, the ECB should “implicitly” appoint the woman. While such an approach “does create a certain disadvantage for the men” it is justified if it helps to “redress the gender balance while still getting the people who are best to do the job”.

The lack of women among Europe’s top central bankers was highlighted shortly after Lagarde became the ECB’s first female president in 2019 when she posted on Twitter a photo of herself and the other members of its governing council, all of whom were male. One observer pointed out there were more women hanging in pictures on the wall than sitting round the table.

Lagarde believes sexism is still widespread, saying last week that there is “plenty of that still going around”. She added: “I still experience it, of course . . . I do see market observers who have those vaguely dismissive and often patronising comments about what I do, or what I wear, or what I say.”

There is little the ECB can do about this because its council members are appointed by national governments. However, the central bank also missed internal targets for increasing its share of female managers by 2019. Under Lagarde, it has set new objectives to raise the percentage of women among managers from 30 per cent to 36 per cent by 2026. 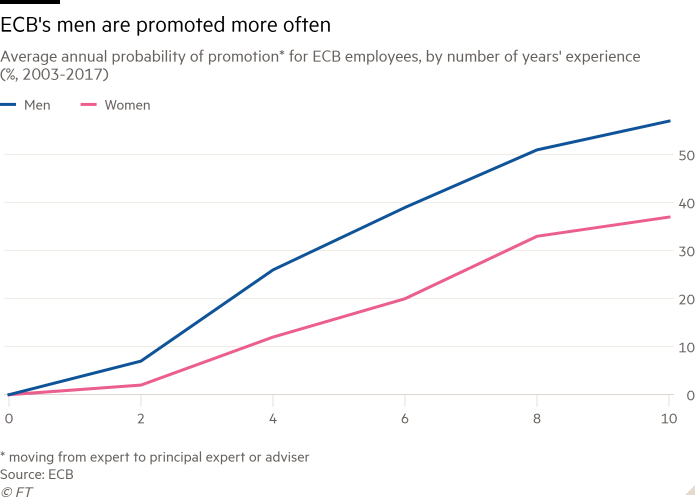 The plan includes a commitment that half of most appointments should be female, requires every selection committee to have at least two women and makes senior managers accountable for hitting gender diversity targets.

“When there is an open position, the manager is explicitly asked to look for qualified women, to talk to those women and encourage them to apply,” said Schnabel.

The ECB also offers €10,000-a-year scholarships for five female students to do an economics masters degree.

Schnabel, who joined the ECB at the end of 2019, said it took her a long time to realise sexism was a problem in economics. She noticed something was awry when female students were too scared to present their doctoral papers because of the aggressive atmosphere created by mostly male professors at research seminars.

“They would say that this is something I just don’t want to do if it is always negative feedback,” said Schnabel. “Probably for me it was less of a problem, because I’m a fighter. But still, it put a lot of pressure on me as well and I didn’t like it.” 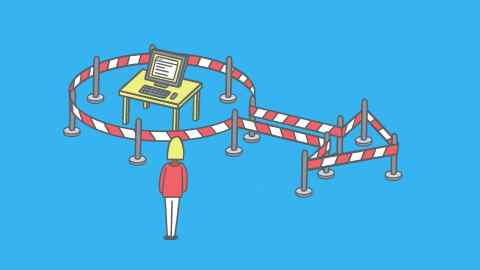 Schnabel also noticed that several women dropped out after having children, adding that she was “very lucky” to get a flexible position at the Max Planck Institute after having the first two of her three children. Gender diversity is now “a topic dear to my heart”, she said.

But although several European countries have introduced quotas for the number of women on companies’ boards, Schnabel said quotas could be “problematic” at central banks.

Delgado is one of only four female deputies at the 19 national central banks across the eurozone. When she joined the Bank of Spain three decades ago, it was a very different place, she said. “It was just men in dark suits and ties who would see you just as a little girl . . . It was a little paternalist; well, more than a little.”

But by 2019 Spain’s central bank had the best gender balance of 44 of the world’s leading central banks, according to think-tank Omfif.

“We have total parity between men and women on our governing council, and women have approximately 40 per cent of the executive commission [the equivalent of a board of directors],” Delgado said.

Like the ECB, the Bank of Spain does not have strict quotas for women’s posts — instead, it plans to set goals to address a lack of women in certain departments.

Delgado cited “a very objective system of recruitment” in which all assessment is anonymous until the interview stages, as well as mentoring and coaching.

She acknowledged, however, that there was still a problem with women not applying for promotions as often as men. “We clearly need to incentivise women to go for those posts,” she said. “We cannot let 50 per cent of our talent go to waste.”