Are CEOs living up to the pledges they made after George Floyd’s murder?

The words “systemic racism” used not to be spoken on US companies’ earnings calls. The murder of George Floyd, a black man killed by a white police officer last May, abruptly changed that, putting the phrase into the mouths of the country’s top executives and forcing them to consider their part in a system they were now denouncing.

Chief executives from Apple’s Tim Cook to David Solomon of Goldman Sachs declared that business leaders needed not only to speak up, but to do more to address racial disparities in their own companies.

An assessment of the changes they have made in the intervening period suggests that Floyd’s death did catalyse corporate diversity, equity and inclusion efforts. But on several key measures, much more still needs to change to turn executives’ newly activist rhetoric into reality.

American corporations have pledged to spend $50bn on racial equity since Floyd’s murder, according to a tally of public promises compiled by Creative Investment Research. The funds were to be spread between donations to civil rights organisations, targeted investments in communities of colour and overhauls of their internal recruiting and training programmes. Yet only about $250m has actually been spent or committed to a specific initiative, according to an analysis by the research consulting firm.

“We looked to see how much cash is there, how much actual money is there, and it was a small percentage of the pledges — and that continues to be the case, by the way,” said William Cunningham, Creative Investment Research’s chief executive.

This slow progress has made observers including Cunningham cynical about corporations’ sincerity, noting that such pledges can be easily walked back if the company’s financial outlook or priorities change before the funds are fully paid out.

“Time will tell,” said Cunningham. “It’s still early. We’re one year in and what did we have, 400 years of pain and suffering?”

Some of America’s largest companies have set hiring and promotion targets, with Amazon, for example, committing to doubling its number of black leaders to about 8 per cent of senior directors this year. Several have also started reporting detailed demographic data, with Goldman Sachs revealing that just 49 of its 1,548 executives, senior officials and managers in the US are black.

Hubert Joly, the former chief executive of Best Buy and author of a new book on leadership, said there was “a level of seriousness” about setting public goals by which executives’ racial equity efforts can be measured — and a wider recognition of the financial case for addressing injustices.

“When the city is on fire you cannot run a business,” he said.

Some companies are resisting more disclosure, however, with Berkshire Hathaway and Johnson & Johnson among those that have fought shareholder proposals to push them harder on diversity. Equally concerning for activists, few boards are yet tying any of their executives’ pay to diversity targets.

When Just Capital released a “tracker” of companies’ commitments to racial equity earlier this month, it found that only 31 per cent of the country’s 100 largest companies were analysing how equitably they paid employees of different races and ethnicities.

“When we polled black Americans on what are the things companies should do on racial equity, paying a living wage was at the top of the list,” said Martin Whittaker, Just Capital’s chief executive. “It’s pretty clear companies sit on this data until they have a good news story to tell.”

Of the few companies that conducted pay equity audits, the likes of Lyft, Levi Strauss and Verizon said they had revealed no systemic pay differences between ethnicities. But transparency about pay equity remains limited, making the issue a priority for reformers. 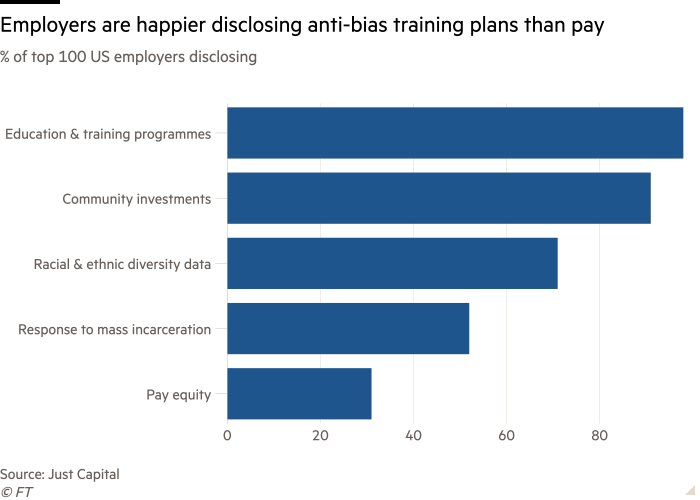 Using the power of their platforms

Ken Frazier, the outgoing chief executive of drugmaker Merck, who has been one of the few black leaders of S&P 500 companies, said last summer that groups needed “to go to the seat of government” to help create a society that would be good for business.

Companies such as Delta Air Lines and Home Depot have been dragged into political battles over new voting laws which are expected to discriminate against black voters, but relatively few have used their political clout that explicitly.

Instead, most have preferred to lobby behind the scenes, co-ordinate their responses to specific pieces of legislation through industry groups, and stick to broad statements of principles in public.

A few have used the power of their platforms more forcefully with their suppliers, however.

“We are demanding much more responsibility and accountability around subcontractors,” said Dambisa Moyo, an economist who is a director of companies including 3M and Chevron. She said the companies she works for were scrutinising whether the accountants, law firms and headhunters they employ were sufficiently diverse.

Coca-Cola went public with such a demand in January, telling US law firms they must commit within 18 months to having at least 30 per cent of their billable hours be from “diverse” attorneys, half of whom must be black.

On current trends, black lawyers could not expect to be equitably represented among law firm partners until 2391, said Bradley Gayton, Coke’s general counsel at the time: “We have developed scorecards, held summits, established committees and written action plans. These efforts are not working.”

Weeks after sending the letter and just eight months into his job, however, Gayton had stepped back to a consulting role.

Asked whether Gayton’s diversity demand remained in place, the company said only that his successor would take time to “thoughtfully review” its initiatives.

The S&P 500 still counts only a handful of black chief executives, but the composition of its boardrooms has started to shift a little faster in the past year as investors, financiers and exchanges prioritise the diversity that, successive studies show, correlates with stronger financial performance.

The “glacial” progress historically means 40 per cent of Russell 3000 companies still lack apparent racial or ethnic diversity on their boards, according to Institutional Shareholder Services. And just below board level, black Americans still hold only 3 per cent of executive or senior level roles in companies with 100 or more employees, according to EEOC data.

Pressure is building for that to change, with Nasdaq announcing in December that companies on its exchange should have at least one woman and one member of an under-represented minority on their boards. Goldman Sachs similarly said that it would not take companies public from this year without at least two diverse board members, and State Street said it would vote against directors whose companies fail to disclose their boards’ racial and ethnic composition.

But few large investors are yet voting against non-diverse boards. In an open letter earlier this month, racial justice activists and union leaders noted that large asset managers had re-elected the vast majority of all-white boards last year.

The latest annual meeting season has just begun. This year’s votes, the letter said, would show whether asset managers’ pledges had been meaningful or “cynically performative”.