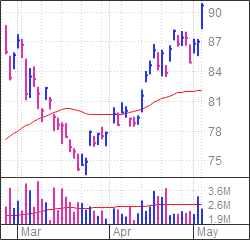 Rio Tinto stock is the IBD Stock of the Day as the mining giant’s shares break out of a base on rising metal prices, which are lifting other miners too.


The gains for the company and other mining stocks came as mining stocks rallied on Wednesday, as the price of copper, which Rio Tinto (RIO) also mines, regained the $10,000-per-tonne level. Prices topped that milestone last week for the first time in 10 years.

Mining stocks and metal prices have broadly been lifted by the economic rebound, which has created more demand for iron ore, copper and other metals that get used in other materials and devices. A potential infrastructure push from President Joe Biden has also lifted the sector.

For infrastructure, iron ore is a key ingredient in steel, potentially bolstering Rio Tinto stock and others that mine the substance. Copper, used by electric vehicles and wind and solar energy systems, could play a bigger role in any infrastructure plans that lean green.

The relative strength line, which measures whether a stock is outperforming the S&P 500, has also trended higher since March. Shares have a strong 98 Composite Rating and a 94 EPS Rating.

Rio Tinto stock was IBD Stock of the Day last month as it approached a buy zone. Since then, shares formed a handle to bring the entry a bit lower.

Among other mining stocks, BHP (BHP) climbed 3.5%, putting it above a handle-like formation. The move represents an early entry.

Freeport-McMoRan (FCX) was up 5.9% to 41.54. However, shares were extended from a double-bottom base.

Mining Stocks Get A Charge From Biden’s Green Infrastructure Push

Steel Stocks Heat Up As Demand Booms Amid Economic Recovery