Surface Laptop 4 vs. MacBook Pro M1: Which laptop is for you?

The Surface Laptop 4 is an excellent all-around notebook, providing plenty of power within a thin and attractive design. It also happens to have some unique advantages over the MacBook Pro — one of our picks for the best laptops you can buy.

With a taller-than-average display, a combination of modern and classic ports and one of the best keyboards we’ve tested, the Surface Laptop 4 makes a strong case for your workspace when pitted against the latest MacBook Pro. That said, Apple’s latest premium laptop still wins big in many areas, especially when it comes to sheer speed, battery life and connectivity.

One quick note: For this comparison, we’re talking specifically about the 13.5-inch Surface Laptop 4 with an Intel processor, and the new 13-inch MacBook Pro with Apple’s M1 chip inside. With that said, let’s break down the big strengths and weaknesses of these two portable powerhouses to help you find the right notebook for your needs.

The Surface Laptop 4 and MacBook Pro both sport familiar-looking (and very attractive) designs, but we have to give the edge to Microsoft when it comes to sheer aesthetics.

Microsoft’s notebook is a hair thinner and lighter than the MacBook Pro and comes in a splash of attractive colors, including Matte Black, Sandstone and the especially eye-catching Ice Blue variation we tested. By comparison, the MacBook Pro is limited to just Space Gray and Silver.

But where the Surface Laptop 4 really stands out is with the soft Alcantara fabric covering that’s available on select 13.5-inch models, which doesn’t just look better than the all-metal MacBook Pro — it also proved easier on our wrists while typing. Speaking of which, both of these laptops have excellent keyboards, but we enjoyed hammering away on the Surface Laptop 4 just a bit more. The Laptop 4’s keyboard offers a deep 1.3 millimeters of travel and felt satisfyingly bouncy and comfortable as we spent hours typing up documents and emails. 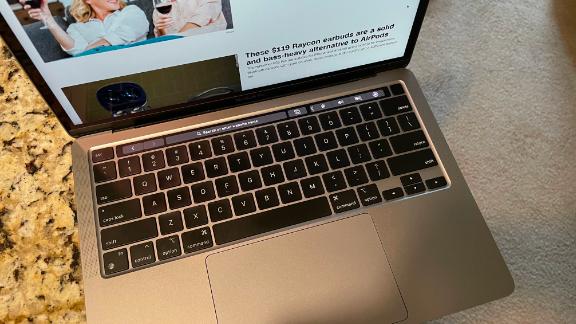 The Magic Keyboard on the MacBook Pro is no slouch either, with snappy keys that are much less shallow than the butterfly keyboards of old. But the Laptop 4’s keys just feel better, especially when paired with the comfortable wrist rest provided by the Alcantara models.

These slim laptops are also slim on ports, each offering a handful of connection options that differ in some key ways. The Surface Laptop 4 gets you one USB-C port, one USB-A port, a headphone jack and a Surface Connect port, the latter of which connects to the included charger and can be used with supported docking stations. Meanwhile, the MacBook Pro features four USB-C Thunderbolt ports in addition to a headphone jack.

If you’re still using accessories that connect via the older USB-A standard (such as mice and storage drives), the Surface Laptop 4’s USB-A port is a nice perk that may prevent the need to spring for a separate USB adapter. But the MacBook Pro’s four USB-C Thunderbolt 3 ports are faster than the standard USB-C slot on the Surface Laptop 4.

These ports can transfer data at up to 40 gigabytes (GB) per second, which is up to twice as fast as what you’ll find on regular USB-C and is useful for quickly transferring files from a hard drive or connecting to multiple 4K displays at once. As such, Apple’s notebook has a slight edge for power users in terms of port selection. Fortunately, you can expand the connectivity of either of these laptops with one of the best USB-C hubs. 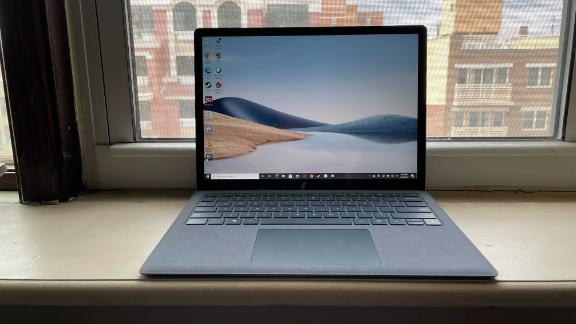 The displays on the Surface Laptop 4 and MacBook Pro both delivered vibrant colors and impressive detail in our testing, and sport similarly sharp resolutions of 2256 x 1504 for the Surface versus 2560 x 1600 for the MacBook. But they each have some key perks that are worth keeping in mind when deciding between the two.

The Surface Laptop 4’s screen has a unique 3:2 ratio, which is taller than what you’ll find on most modern laptops and has about an extra inch of height compared to the MacBook Pro. That’s beneficial for seeing more of an Excel spreadsheet or a webpage at once without scrolling, and may be enticing for heavy multitaskers. And unlike the MacBook Pro, the Laptop 4 has a touch screen for when you want to pinch to zoom into photos or doodle around in Paint. 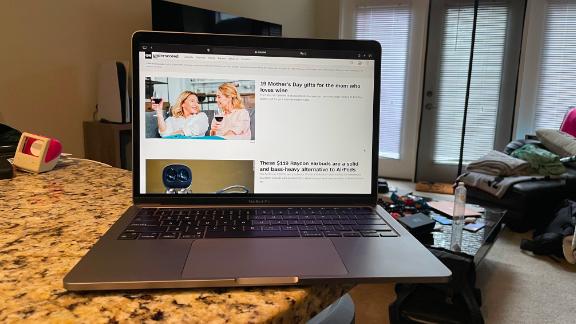 The MacBook Pro’s display stands out with Apple’s True Tone technology, which automatically adjusts the color temperature of the screen based on what room you’re in to keep things looking natural no matter where you’re working. We’ve also found Apple’s screen to be slightly brighter than the Surface’s in side-by-side comparisons, which is important if you’re going to be spending long hours combing through emails and editing photos and videos.

As far as multimedia goes, these two laptops trade blows in some key areas. The Surface Laptop 4 and MacBook Pro each have 720p webcams, and while they’re both grainier than we’d like, we found that Microsoft’s notebook takes sharper, brighter and less saturated photos. But Apple’s laptop wins on the audio front, pumping out richer and louder sound that better elevated individual instruments, such as guitars and bass, in our listening. 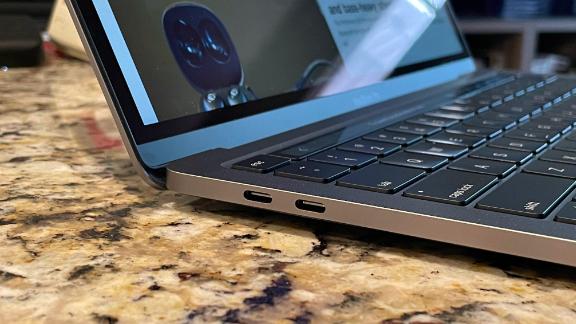 The Surface Laptop 4 delivered plenty of muscle for everyday multitasking in our tests, but the latest MacBook Pro is on another level. That’s all thanks to the new Apple M1 chip powering the company’s latest computers, which runs circles around the 11th Gen Intel Core i7 chip in our Surface Laptop 4. Apple’s processor seriously sets a new standard for laptop performance.

The MacBook Pro’s benchmark scores more than doubled that of our Surface Laptop 4 on the Geekbench 5 test, which measures a laptop’s overall speed. In terms of real-world use, all that power meant that we were able to power up 16 different apps (including Final Cut Pro and Photoshop) on Apple’s laptop without any crashes or slowdown.

But the M1 chip doesn’t just allow the latest MacBook Pro to be super fast — it also enables very strong battery life. Apple’s latest high-end notebook lasted us through long 14-hour days, whereas the Surface Laptop 4 would peter out around 8.5 hours. Both notebooks will get you through most of a standard workday on a single charge, but the MacBook Pro has much stronger endurance for those who spend most of their day on the go. 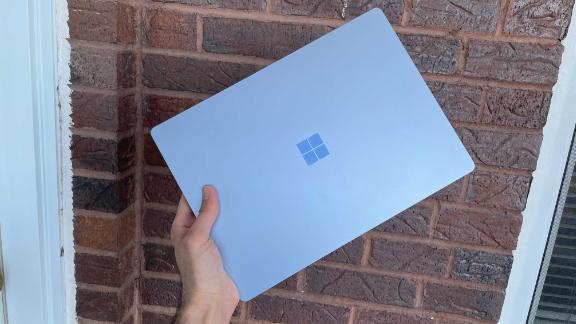 While these two notebooks are in the same general price ballpark, the Surface Laptop 4 offers a wider range of configurations and has the lower starting price of the two. Microsoft’s 13-inch laptop starts at $999, which gets you an AMD Ryzen 5 processor, 8GB of RAM for multitasking and 256GB of solid-state drive (SSD) storage. The MacBook Pro starts at a more expensive $1,299 with the same amount of RAM and storage, but it has a much more powerful M1 processor across all models.

Looking at some of the higher-end versions of both notebooks, the Surface Laptop 4 technically gives you more for your money in some areas. For example, a $1,299 Surface Laptop 4 with Intel Core i5 has nearly twice the storage of the $1,299 MacBook Pro at 512GB versus 256GB. And the $1,499 configuration of Microsoft’s laptop gets you 16GB of RAM versus 8GB in the $1,499 MacBook Pro, which means more headroom for multitasking for the same price.

However, if you want a bigger 1-terabyte (TB) storage drive for housing lots of files, Apple has the better deal here. The MacBook Pro can be configured with 1TB of storage and 16GB of RAM for $1,899, whereas your only 1TB Surface Laptop 4 option is a pricey $2,299 model that gets you a larger 32GB of RAM.

Overall, the Surface Laptop 4 offers a lot of flexibility, with the most affordable starting price and a wide range of processor or RAM options. But Apple’s M1 chip smokes even the high-end Intel Core i7 processor inside the premium Surface Laptop 4 models, and it comes standard on every configuration. 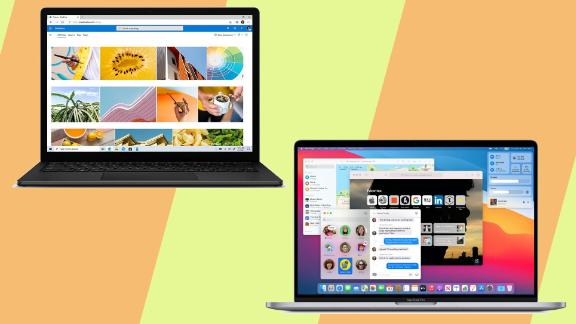 Your decision may also come down to whether you simply prefer Windows or macOS, which are the operating systems that power the Surface Laptop 4 and MacBook Pro, respectively. Those who already use lots of Apple products like an iPhone, iPad and Apple Watch will find lots to like about the MacBook, as Apple’s software makes it very easy to access things such as notes, contacts and text messages across devices. The MacBook Pro is also popular among creative types, thanks to exclusive apps like Final Cut Pro for video editing and Logic Pro for music production.

While both of these machines can handle light titles like Rocket League and Minecraft, Windows offers a more robust selection of gaming options. It has more supported titles on major marketplaces like Steam, and Windows devices like the Surface Laptop 4 can even stream Xbox games from the cloud. And if you use an Android device, the Windows 10 Your Phone app lets you access your apps and messages right from your PC. (It also works with iPhones, but in a much more limited fashion.)

If your daily workflow consists of apps such as Microsoft Word, Photoshop, Zoom or just lots of Google Docs, you’ll be fine with either laptop. But you should keep the above use cases and exclusive apps in mind before you pull the trigger. 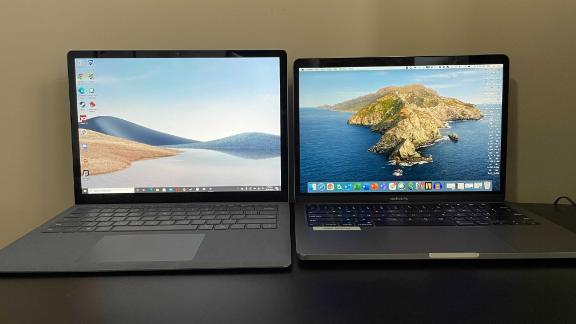 If sleekness and comfort are your priority, go with the Surface Laptop 4. Its slim design, attractive color options and bouncy keyboard make it a delight to use, particularly if you go with one of the Alcantara-covered options (which we highly recommend). It’s also the way to go if you want a tall display within a relatively compact design, and care about having a touch screen. Its cheaper starting price of $999 certainly doesn’t hurt either.

But while the Laptop 4 has plenty of muscle for basic workloads, the MacBook Pro (starting at $1,299) is the true powerhouse out of the two. Its M1 processor delivers speeds that eclipse just about every laptop we’ve tested, and its battery life is much better than what we got out of Microsoft’s machine. MacBooks are also a no-brainer for those in the Apple ecosystem, as they’ll work seamlessly with your iPhone, iPad and Apple Watch.

Fortunately, there’s no real wrong choice between these two sleek and powerful laptops — just make sure you’re picking up the one that best suits how you work and play.