The chief executive of Moderna said he “didn’t lose a minute of sleep” following the US government’s decision to support the suspension of Covid-19 vaccine patents, a move that stunned the pharmaceutical industry.

The Biden administration said on Wednesday it would support the temporary waiver of the patents, a step that had been opposed by many in the industry who said suspending intellectual property rights for the jabs set a dangerous precedent and risked halting innovation in the sector.

But Stéphane Bancel, Moderna’s chief executive, said he believed “it doesn’t change anything for Moderna,” during a call with analysts on Thursday to discuss the company’s first-quarter results.

He argued that there were not enough production sites or skilled workers to be able to rapidly increase the supply of mRNA vaccines such as Moderna’s, and that focusing efforts on expanding manufacturing within companies that already had the technology and knowledge was the fastest and most effective way to supply the world with mRNA jabs.

“There is no idle mRNA manufacturing capacity in the world. This is a new technology, you cannot go hire people who know how to make mRNA — those people don’t exist,” Bancel said.

He added that the patent waiver “will not help supply more mRNA vaccines to the world any faster in 2021 and 2022”, the most crucial period of the pandemic.

“If you were to start today, you’re going to have to start by hiring people. Those vaccines don’t fall from the sky,” Bancel told the FT US Pharma and Biotech Summit later on Thursday. “There is no mRNA industry . . . When we hire people that come from traditional pharma, we have to train them in the art of mRNA.”

The Moderna and BioNTech/Pfizer jabs are made with mRNA, a sequence of genetic code that instructs the body’s immune system to fight infection. The technology had never before been used in a vaccine. By contrast, the Johnson & Johnson and Oxford/AstraZeneca shots use an adenovirus to deliver the vaccine into the body.

Morgan Stanley analysts said they “do not see significant practical implications” from the IP waiver, since they believed the World Trade Organization had no power to force Moderna to teach other manufacturers how to make the vaccine, “suggesting no change to the status quo”.

Moderna’s shares fell 10 per cent on Thursday, despite reporting its first-ever quarterly profit, but had recovered by midday to trade about 2 per cent lower.

The company sold $1.7bn worth of Covid vaccines in the first three months of the year, and said it would apply to US health agencies for full approval of its jab this month.

The drugmaker said total revenues surged to $1.9bn in the first quarter as it sold 102m doses of its two-dose shot. It reported net income of $1.2bn compared with a loss of $124m in the same period a year ago.

Moderna also said results from its phase 2/3 vaccine trial on children aged 12 to 17 showed 96 per cent efficacy. The trial on 3,235 participants elicited no serious side effects, it said.

The trial results came as countries sought to expand their vaccine programmes to younger age groups. The BioNTech/Pfizer vaccine was authorised for use on 12 to 15-year-olds in Canada on Wednesday, the first country to approve a coronavirus jab for children.

Moderna is likely to benefit from the need for booster shots to tackle emerging variants of coronavirus in the years to come and Bancel emphasised the demand from governments for boosters. The drugmaker has expanded its capacity to manufacture up to 3bn vaccine doses in 2022. 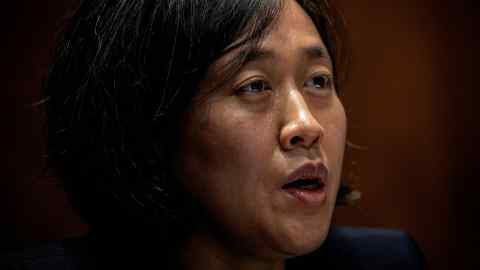 A new variant has already fuelled a disastrous wave of the virus in India, which has registered more than 20m cases, pushing health systems to the brink of collapse.

The company said that a single 50mg booster shot in people who were already vaccinated had proved to be effective against the original virus and the variants first detected in South Africa and Brazil.

Bancel told the FT that governments that had bought doses of adenovirus-based vaccines were looking to use mRNA vaccines for boosters because mRNA jabs had proved to be more effective.

Moderna said it had so far signed vaccine contracts worth an expected $19.2bn in total revenues for 2021 and that it expected to deliver up to 250m doses in the second quarter.

Switzerland on Thursday became the latest country to order booster shots from Moderna, signing up for 7m doses in 2022 and an option for an additional 7m doses to be delivered by at least the first quarter of 2023.