Opinion: Should you buy Netflix stock? The company has 2 big problems

We’ve been bearish on Netflix
NFLX,
-1.41%
for many years, not because the firm provides a poor service, but because it cannot monetize content as well or sustain investment in content for as long as its competitors. Though the stock has only become more overvalued, our bearish thesis is proving truer by the day.

With its huge subscriber miss in the first quarter and weak guidance for subscriber growth, the weaknesses in its business model are undeniable. As a growing number of competitors take market share at a rapid rate, it’s clear that Netflix cannot generate anywhere close to the profits implied by the current stock price.

We think the stock at best is worth just $231 today – a 54% downside. And even that might be optimistic.

Netflix reported just under 4 million new subscribers in the first quarter, well below its previous guidance of 6 million and consensus expectations of 6.3 million. Management guided for just one million subscriber additions in 2Q21, which puts Netflix on the lowest subscriber addition trajectory since 2013, or when Netflix began producing original content

Netflix can claim, as management did in its earnings press release, that competition didn’t play a large role in the subscriber miss, but market share data for the streaming industry indicates otherwise. According to a report by Ampere Analysis, a media and content analytics firm, Netflix’s share of the U.S. streaming market fell from 29% in 2019 to 20% in 2020. This chart shows Netflix lost a lot of market share and gained a lot of competitors in 2020.

The streaming market is now home to at least 14 streaming services with more than 10 million subscribers. Many of these competitors (like Disney, Amazon, YouTube (owned by Google parent Alphabet
GOOG,
+0.11% 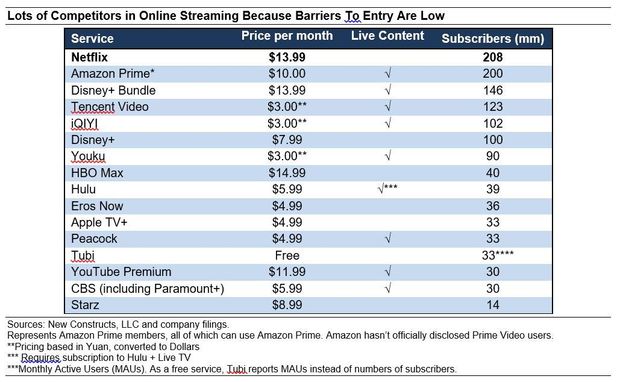 We underestimated Netflix’s ability to raise prices while maintaining subscription growth because we expected competitors to enter the streaming market sooner. But now that the competition is here, our thesis is playing out as expected. As a result, consumers have a growing list of lower-cost alternatives to Netflix and may not be as willing to accept price hikes going forward.

Increased competition hasn’t only hurt subscriber growth, market share and pricing power. It also raises the costs for the company to produce, license and market its content.

Competition creates a Catch-22: Growth or profits, but not both

So Netflix plans to spend $17 billion on new content in 2021….but will it work? The data suggests “no” and that throwing billions of dollars at content will not be enough to fend off its competition.

Here is where Netflix narrative breaks down: the content spending cuts needed to be profitable prevent Netflix from achieving the scale (i.e. number of subscribers) needed to justify its lofty valuation.

Consequently, Netflix must continue to invest a significant amount of money in its licensed content library, such as the $500 million deal for Seinfeld and the more recent deal with Sony Pictures, rumored to cost $1 billion.

On top of all that, Netflix, unlike its competitors, doesn’t have any live sports offerings to keep subscribers hooked.

Netflix has one revenue stream, subscriber fees, while Disney monetizes content across its theme parks, merchandise, cruises and more. Competitors such as AT&T and Comcast/NBC Universal
CMCSA,
-0.39%
generate cash flows from other businesses that can help fund streaming platforms.

As a result, Netflix loses money while competitors make money. This chart compares Netflix’s cash burn to Disney’s cash generation. Since the second quarter of 2019, Netflix has burned $1 billion in free cash flow while Disney generated $4.7 billion in FCF. Netflix burned $11.7 billion in FCF over the past five years.

The stark contrast raises the question of how long Netflix can keep this up. We don’t think Netflix’s money-losing mono-channel streaming business has the staying power to compete with Disney’s (and all the other video content producers’) original content spending—at least not at the level to grow subscribers and revenue at the

We use our reverse discounted cash flow (DCF) model and find that the expectations for Netflix’s future cash flows look overly optimistic given the competitive challenges above and guidance for slowing user growth. To justify Netflix’s current stock price of around $505, the company must:

In this scenario, Netflix’s implied revenue in 2030 of $89.4 billion is more than 3.5 times its 2020 revenue, double the combined TTM revenue of Fox Corp.
FOXA,
-1.09%
and ViacomCBS and 47% greater than Disney’s TTM revenue. See the math behind this reverse DCF scenario. 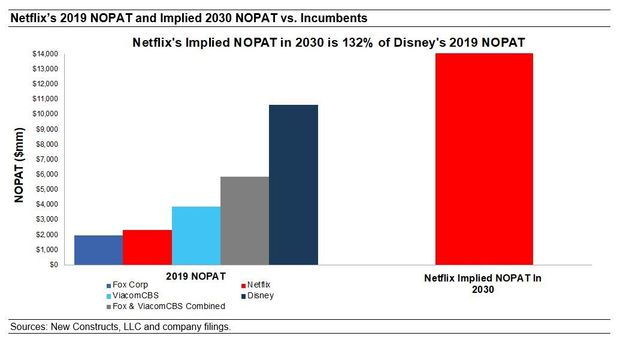 Below, we use our reverse DCF model to show the implied value of NFLX under a more conservative scenario that reflects a more realistic assessment of the mounting competitive pressures on Netflix. Specifically, we assume:

In this scenario, Netflix’s NOPAT in 2030 is over nearly $8 billion (nearly twice 2020 NOPAT) and the stock is worth just $231 today – a 54% downside to the current stock price. See the math behind this reverse DCF scenario.

Clearly, assuming the YoY change in invested capital of revenue stays at just 10% is very conservative. We think spending will need to be much higher to achieve the growth that we forecast. Nevertheless, we use this lower assumption to underscore the risk in this stock’s valuation.

David Trainer is the CEO of New Constructs, an independent equity research firm that uses machine learning and natural language processing to parse corporate filings and model economic earnings. Kyle Guske II and Matt Shuler are investment analysts at New Constructs. They receive no compensation to write about any specific stock, style or theme. New Constructs doesn’t perform any investment-banking functions and doesn’t operate a trading desk. This is adapted from a report entitled “Netflix: A Meme-Stock Original.” Follow them on Twitter @NewConstructs.