When the pandemic arrived in Levittown, Pennsylvania last year, Nicole Heary hurried to readjust her work schedule as a front-end manager at a grocery store so that she could also look after her children.

The 46-year-old single mother of six, including three kids still in school, signed up for a 4am-to-8am shift so that she could be home in time for their remote learning. In the evenings she returned for another four-hour shift. And every weekend she worked, to keep at least two weekdays free to better monitor her children’s virtual classrooms.

Heary did not lose her job because of the coronavirus crisis, unlike 20m other Americans. But she said the experience revealed just how much her career was yoked to the needs of her children — and had been stifled by a lack of support for working parents in the world’s largest economy.

“Even though I advanced, I would always have to come back, because as moms, we take the hit,” Heary said. “Whenever something happens, when childcare fails, or whatever happens, it’s always Mom,” she added.

Heary’s travails — and those of millions of struggling households — are what pushed Joe Biden last week to introduce a $1.8tn scheme to pour government funds into childcare, education and healthcare. He calls it the American Families Plan.

As the US economy roars back from the depths of the coronavirus crisis, with expectations that new payroll data will show almost 1m jobs added last month, Biden is making the strongest effort of any recent president to boost female participation in the labour market and improve conditions for women already in the workforce through direct government spending.

His plan would expand a tax credit for children, offer subsidies for childcare expenses and childcare providers, fund universal pre-kindergarten education, and guarantee paid family and medical leave — social spending where the US has lagged behind many advanced economies.

“The challenge is that in the United States, we have a labour force where the majority of women are breadwinners or co-breadwinners for their families. And yet, we don’t have the infrastructure to support families that no longer have a full-time stay-at-home caregiver,” said Heather Boushey, a member of the White House Council of Economic Advisers. “We underwent this massive economic transition, but we didn’t adjust the environment [and] the landscape in which families are engaging in the economy.”

A bitter and intense political fight is expected over the measures and it is far from clear that Biden will prevail, even if polls show the package is popular.

Republicans are criticising the plan for excessive spending, taxing the wealthy to pay for it and even for ruining the social fabric by encouraging parents — and especially women — to leave their children in the care of others. Josh Hawley, the junior Republican senator from Missouri, has blasted the plan as “lefty social engineering”.

“Our public policies should promote the family rather than hurt it, and we can start by giving parents the power to raise their children as they see fit,” he wrote in an article for Fox News last month. “Democrats . . . try to make family life more affordable by pushing both parents into the full-time workforce while subsidising commercial childcare.”

The argument has echoes of the 1970s, when, under pressure from conservative Republicans, president Richard Nixon vetoed legislation that would have created a national child care network on the grounds that it encouraged Soviet-style “communal” child-rearing.

Conservative economists argue the plans will also be counterproductive. “We know the recipe of what is needed to get women back into the workforce, and that is a strong economy, and we had a strong economy not long ago. The policies that contributed to that were lower taxes, less regulations and less government spending,” said Kelsey Bolar of the Independent Women’s Forum, a conservative policy group. Yet there is little doubt that the long march of American women into the workplace ground to a halt in recent decades. After rising sharply during the 1970s, 1980s and 1990s, female labour force participation hit a peak in April 2000 at 60.3 per cent and has never reached those heights again.

To Biden administration officials, the shortcomings of the US way have been glaring. “Right now families rely on an ad hoc system, there are different standards across states, millions of families live in what are called ‘child care deserts’ where there isn’t even a slot available or sufficient funds available,” Boushey said. “The quality is not good enough for American children.” The international comparisons are particularly troubling for the US. According to the OECD, it spends far less than the average of advanced economies on family benefits, while net child care costs as a share of women’s earnings are much higher than average for developed economies. Meanwhile, the US is the only OECD country without any national paid leave benefit.

“Every woman that wants to be working should have the ability to do that. I think that’s good for our society,” says Beth Bengtson, founder of Working for Women, a charity. “Everybody that’s worked in trying to help women get into the workforce knows these have been tough issues all along. But no one’s actually put something out there and said, ‘Hey, we’re actually going to address this and here’s a way that we could start tackling it’.” 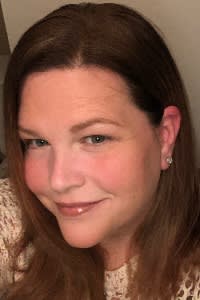 In Levittown, Heary’s younger children — aged 7, 8 and 13 — are now back in school five days a week as the economy reopens. She is not naturally drawn to Democratic policies — in fact, she said she is a life-long Republican who voted for Donald Trump in 2016 and for a third-party candidate in last year’s election.

But she backs Biden on this.

“This act does give me a little hope not only for my children’s future, but also for the future of other women in the workforce,” she said. “You know that there may be things in place that would not necessarily require them to gear their careers towards their children, and have to constantly stop and start.”