How to milk a pea: the battle for the plant-based drinks market

For the past nine months, scientists at the Lausanne laboratories of the world’s largest food manufacturer have been busy working out how best to milk a pea.

As the technicians developed their solution — combining pea proteins with water, chicory fibres, sugar and sunflower oil — they were joining an increasingly competitive fight. With its launch this week of the Wunda yellow pea milk brand, Nestlé became part of the growing international push to convert consumers from the cow’s milk drunk for millennia to plant-based alternatives. One rival, Oatly, has grown from humble origins in the Swedish city of Malmö to an upcoming IPO that could value it as high as $10bn.

The stakes are high: advocates argue the lower greenhouse gas emissions from plant milk production, compared with cattle, point the way to a new high-tech, animal-free approach to food and drink that could help feed humanity and curb global warming.

“Our aim is to disrupt one of the world’s largest industries — dairy — and in the process lead a new way forward for the food system,” wrote Toni Petersson, chief executive of Oatly, in the company’s prospectus ahead of its planned Nasdaq listing.

With little fanfare, plant-based milk has become a fiercely contested consumer market. At $17bn a year, according to research group Euromonitor, it is still only a fraction of the size of the overall $650bn annual dairy market, but dozens of start-ups and many of the biggest multinationals are investing in products that mix the latest in food science with a shift in consumer tastes towards products seen as healthier and more sustainable.

Demand for plant milk has fed off café culture. “To choose your specific type of plant-based milk in Starbucks [now] seems to be a way of identifying yourself,” says Bruno Monteyne, an analyst at Bernstein.

Nestlé’s belated entry into the market springs from a conviction among multinationals that the plant dairy trend is a lasting shift, not just a middle-class fad. French yoghurt maker Danone is further down that road, selling €2.2bn of plant-based dairy alternatives in 2020.

Yet the plant milk mania has prompted a fightback by dairy groups, which have stepped up promotion of their own sustainability efforts and secured an EU ban on calling vegan products “milk” or “yoghurt”. Plant-based milks, meanwhile, have struggled to match the nutritional properties of dairy such as protein levels and essential amino acids.

In what is now a highly competitive field, manufacturers face pressure on margins and an inevitable process of consolidation, all while holding the attention of consumers who are consigning past food trends, such as low-fat diets, to history.

“Milks” produced with soyabeans have been made in China for centuries, while almond milk has a long history in the Middle East. But plant milks reached European and US markets much later. Increasing awareness of lactose intolerance spurred demand for soya milk in the 1970s and 80s, backed by a new breed of health-conscious consumer. 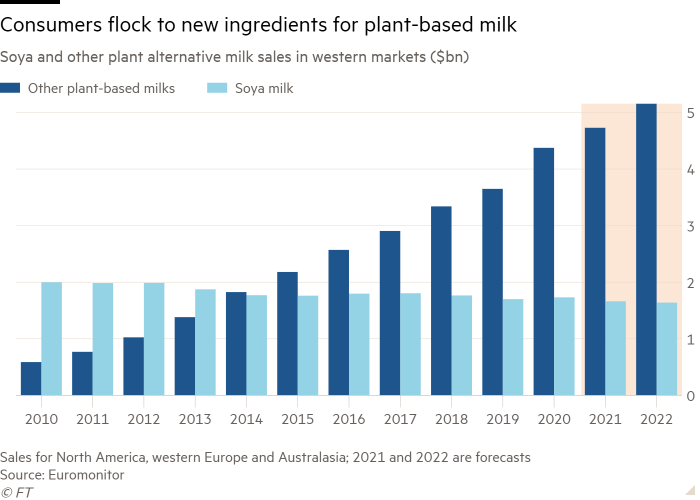 Since then, plant-based milks have proliferated. Households seeking a vegan drink can now choose from among oats, cashews, coconut, hemp, peas, barley, rice, chia seeds and others. Soya has declined on concerns about allergies and its contribution to deforestation. But in the past decade sales of non-soya plant milks have ballooned, rising almost nine-fold in western markets, which include western Europe, North America and Australasia, according to Euromonitor.

This is partly attributed to consumers seeking to avoid saturated fat and cholesterol. But increasingly plant milk sales have been driven by sustainability concerns as shoppers became more aware of climate change. Livestock produce 14.5 per cent of greenhouse gas emissions, when feed, transport and other factors are taken into account, according to the UN’s Food and Agriculture Organization.

Greta Thunberg, the teenage Swedish climate activist, is among those urging lower meat and dairy consumption. While she is vegan, a key trend benefiting plant-based milks has been a desire to cut down on animal products even among those reluctant to adopt strict diets.

“It’s not just the more extreme vegetarian or vegan consumer who has adopted this. It’s becoming a much broader ‘flexitarian’ community,” says Daniel Ordóñez, chief growth officer for dairy and plant-based products at Danone. He adds that improved technology is making plant-based products tastier, helping to attract a broader audience.

US organic food entrepreneur John Foraker says: “Everything from health concerns, animal welfare issues, perceived and real environmental issues around conventional dairy production — all those things are sucked into a big vortex, driving consumer attitudes in many categories. Where you can have a plant-based alternative there is interest.”

‘No such thing as plant milk’

Growing consumer demand has led to an influx of funding. Venture capital investment in the plant-based dairy and eggs sector soared to $1.6bn last year from $64m in 2015, according to data firm Dealroom, with Califia Farms — the US plant-based drinks company — raising $170m and Oatly $200m. Apart from the big food and dairy groups, according to PitchBook, there are now at least 124 standalone plant-based dairy companies globally. 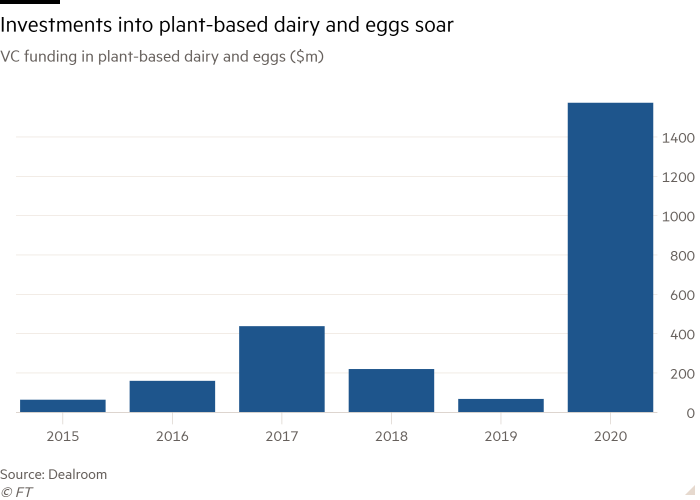 Oatly realised its brand could be established quickly in new markets through partnerships with cafés. It targeted high-end coffee shops and chains with its “barista” version, which froths like dairy milk. Coffee is “the main entry door to adopting plant-based beverages”, says Ordóñez.

As companies compete for their share of a growing market they are ramping up their climate credentials. Oatly labels the carbon footprint of each product. Nestlé has upped the ante with carbon neutral certification for Wunda from the Carbon Trust.

But as plant milk sales have accelerated, the dairy industry has begun to fight back, with terminology and legal cases. “There is no such thing as plant milk . . . It’s called plant drinks. Such a thing as plant milk does not exist,” insists Hanne Sondergaard, chief marketing officer at the Danish dairy co-operative Arla.

In the EU, this distinction is now law. A 2017 ruling by the European Court of Justice prevented vegan foodmakers from labelling their wares “milk” or “yoghurt”. A further battle has erupted over additional measures backed by the European parliament, which — if they win support in talks with the commission and member states this month — will prevent such products from using packaging that echoes dairy, such as yoghurt pots or milk cartons.

Plant milk makers and campaigners have pushed back. “Are you stupid? The milk lobby thinks you are,” railed Oatly in an advertising campaign, accusing the EU of “censoring plant-based foods”. 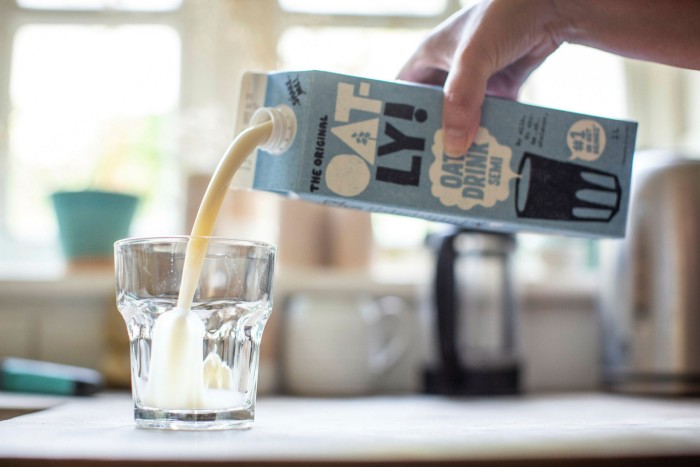 Toni Petersson, chief executive of Oatly, said: ‘Our aim is to disrupt one of the world’s largest industries — dairy — and in the process lead a new way forward for the food system’ © Charlie Bibby/FT

On nutrition, the dairy industry may have a point. David Julian McClements, a professor of food science at the University of Massachusetts, says that for those who are not lactose intolerant, milk “has a really good nutritional profile. Milk has developed for feeding infants — for a calf rather than a human baby, but there is a lot of overlap between what we have in human breast milk and cow’s milk.”

One problem is proteins. Plant milks contain less than dairy: Oatly contains 1g of protein per 100ml, against more than 3g for cow’s milk. With 2.2g of protein, Nestlé’s use of peas is an attempt to compensate for that shortfall. Developments in food technology will bring the products closer to the nutritional properties of dairy, McClements says.

María Mascaraque, global industry manager at Euromonitor, says consumers have worries “about the nutritional content and a concern that these products tend to be heavily processed compared with cow’s milk. Even if they are getting better, there is still a long way to go in simplifying the ingredients list.” For all its criticisms of plant-based dairy, Arla itself launched a line of plant drinks last year. “We can see that it is a growing segment . . . we want to be in there,” says Sondergaard. She says plant drinks are taking market share from dairy in the UK, Denmark and Sweden, while most growth in dairy milk demand is coming from emerging markets.

Sondergaard says one reason consumers like plant-based milk is “that it’s new — we are born bored as consumers, and we want to drink something new”.

Danone is betting that the products carry more than novelty value. Nestlé agrees. Cédric Boehm, head of dairy for Europe, the Middle East and north Africa at Nestlé, says: “This area now has a structural impact. There was, about 20 years ago, a low carb craze. Unilever launched products . . . but it was not structural, it was a fad. In this case it’s structural. This is super attractive.”

After the proliferation of brands, however, Will Hayllar, global managing partner at strategy consultants OC&C, predicts a “shakeout” of the market. “What we’re seeing at the moment is a bit of a land-grab phase by brands, with lots of new propositions being launched . . . Most are significantly more expensive than dairy milks [and] that’s part of what’s fuelling the industry.

“You will see a shakeout over the next three or four years,” he adds, “where a number of those brands fail to achieve scale.” 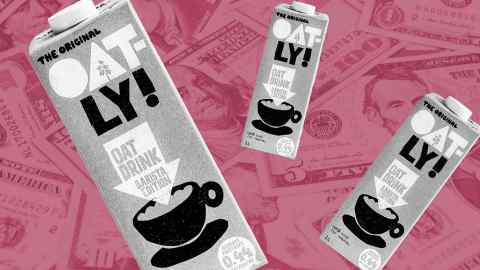 Start-ups trading on an outsider reputation may need to adapt their branding. Oatly has faced criticism from fans over its funding from private equity group Blackstone and Chinese state-owned China Resources.

“You’ve seen that quite a lot in sectors where an alternative solution is growing up . . . they tend to have an insurgent, disruptive brand positioning that . . . resonates with early adopters,” says Hayllar. “Then they grow up and broaden their base, and that’s a delicate judgment that those brand owners are trying to make.”

Potential future challenges include lab-grown milk: US start-up Perfect Day is working to scale up production of animal-free dairy products made from digital copies of cow DNA. 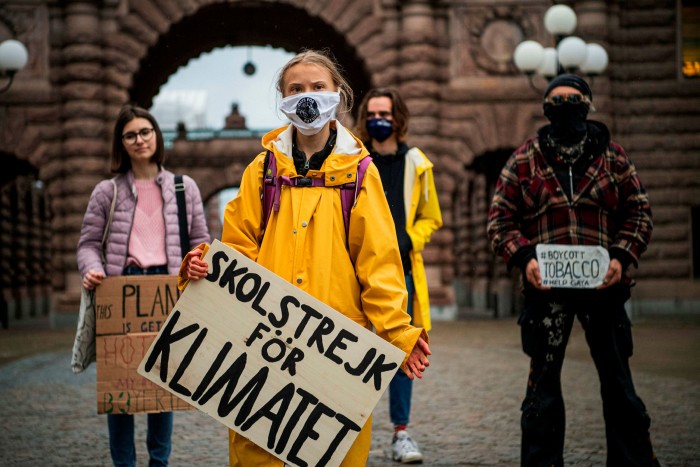 One venture capitalist in agricultural technology says margins will inevitably fall. “The barriers to entry are minimal and it’s incredibly competitive,” he says. “[Rivals] are going to go for Oatly’s gross margins.”

But even if plant milk becomes less profitable, experts are convinced it has a role in curbing climate change.

“From a sustainability point of view it looks pretty good,” says Michael Clarke, a co-author of the landmark 2019 EAT-Lancet report on green diets. “I think it’s going to be one of the solutions to environmental issues we’re facing from our food systems.”