Valencia owner Peter Lim: ‘I own a football club and see what happens next. It’s nothing more’

For Peter Lim, owning Valencia CF, one of Spain’s most successful football clubs, has been “incredibly good for networking”, allowing the billionaire investor to join the top table of the world’s favourite sport.

“Once we were having dinner, all the [club] owners, at one of the Champions League finals,” the reclusive Lim told the Financial Times in a rare interview. “You’ve got sheikhs, kings, mafia, black, white and yellow. And we were arguing about: ‘why did you buy this player for so much?’ We were like kids . . . this game can equalise everything.”

One of Singapore’s richest people with a $2.7bn fortune, according to Forbes, Lim describes Valencia as a “trophy asset”, one that allows him to hobnob with star footballers such as David Beckham and Cristiano Ronaldo. Though the 67-year-old has no plans to sell Valencia, he believes it is worth far more than the €100m he spent in 2014 to acquire a majority stake in the club.

This dispassionate attitude may be shared by fellow club owners, but infuriates Valencia’s fan base, who accuse him of using the team for personal enrichment at the expense of on-pitch results. That disconnect is shared across football, with a chasm growing between supporters who see their club primarily as a local institution, and investors drawn to the financial opportunities of exploiting the sport’s worldwide audiences.

Fans at England’s Arsenal and Manchester United have launched protests against their billionaire US owners, triggered by their failed effort to launch a money-spinning European Super League. Valencia, historically one of Spain’s top clubs, was not considered big enough to be invited to join the breakaway contest.

“You look at the Super League, it’s just purely [for big clubs to] survive, it doesn’t care about the fans,” said Lim. “Why? Because . . . you have a broadcast audience of 100m fans in Asia . . . Have [the Super League club owners] ever considered the local derbies, the inconvenience of watching on Wednesday because I have got to work the next day? They don’t care.”

Lim, though, argues fans must understand that football’s business model is broken.

Steep revenue shortfalls caused by the pandemic have exposed the mounting debt at leading clubs such as Spain’s FC Barcelona and Italy’s Inter Milan, which for years have spent heavily on players in the pursuit of silverware.

The same problem exists at Valencia, which under Lim has turned a pre-tax profit in only one of his seven years in charge with debts of roughly €200m. Meanwhile, the team’s wage bill has jumped from €58.2m in 2014 to €116.4m in 2020, according to consultancy KPMG.

To arrest the trend, Lim authorised a fire sale of players at the start of this season, saying Valencia will instead rely on promoting young players from its academy.

Valencia’s fans accuse Lim of being a poor custodian, steering the club towards mediocrity. Head coach Javi Gracia was fired last week with the team in 14th place in La Liga, Spain’s top division, closer to relegation than qualifying for lucrative European competitions.

Gracia is the eighth manager to depart Valencia under Lim. Among the shortest-lived appointments was that of Gary Neville, the former Manchester United player who had little coaching experience and lasted just four months. Lim is an investor in Salford City, a small English club owned by Neville and other former United players.

“The supporters have all lost faith in him,” said Marcos Colomer, a member of Libertad VCF, a Valencia supporters’ group helping to organise a protest against Lim’s ownership this weekend. “It only remains to be seen when exactly he’s going to find the opportunity to make more money by selling to the best bidder.” The son of a fishmonger, Lim was a stockbroker before an early bet on Singapore-based palm oil company Wilmar paid off. He would sell his shares in what became one of the world’s biggest agribusinesses for $1.5bn in 2010. Beyond football, his investments include hospitals, an architecture practice and real estate.

The same year, a bid to buy Liverpool fell through. That effort prompted multiple clubs to seek him out as potential acquirer, including Valencia, which was in financial distress.

In the early 2000s, Valencia played, and lost, in two Champions League finals. Determined to win Europe’s most coveted trophy, club executives spent heavily on players. They also began building a new stadium, funded by a plan to sell the Mestalla, its existing ground, to property developers.

These people argue ‘because we are Valencians, we know the club’. But under Valencians, the club went bankrupt, right?

The 2008 financial crisis halted construction. Valencia’s debts left it on the brink of collapse. “I don’t want to run [the club] down, but . . . [Valencia] is 102 years old,” said Lim. “It has never won the Champions League and [the past leaders] wanted to win it at all costs? You have rocks in your head.”

Valencia supporters had hailed Lim’s arrival as a benefactor in the vein of Chelsea’s Roman Abramovich or Manchester City’s Sheikh Mansour, believing he would dip into deep pockets to fund the team’s ascent.

The reality has been more erratic. Under Lim’s tenure, the club has qualified for the Champions League in three seasons, and two years ago won Spanish cup competition the Copa del Rey. Those highs have been interspersed with inconsistency and poor results.

Valencia’s uncompleted stadium remains an empty shell. Efforts to finance construction fell through at the start of this season. “The debt that we would have to incur is just not sustainable,” said Lim, though he hopes to find a “solution” to complete the project.

Gaspar Romero, a life-long fan whose grandfather was once the club’s accountant, is sceptical: “He’s running the team in a way that Valencia each time is further from the Champions League. Each year the debt increases and he has to sell the players.”

Lim dismisses critics of his leadership as “trying to make sure that I don’t sell the club to somebody else other than them. These people argue ‘because we are Valencians, we know the club’. But under Valencians, the club went bankrupt, right?”

Fans denounce Lim’s penchant for player trading and close ties to Jorge Mendes, the Portuguese super agent who has arranged many player deals for Valencia. Lim defends the relationship, saying many of Mendes’ clients, such as João Cancelo and André Gomes, were subsequently sold at a profit. 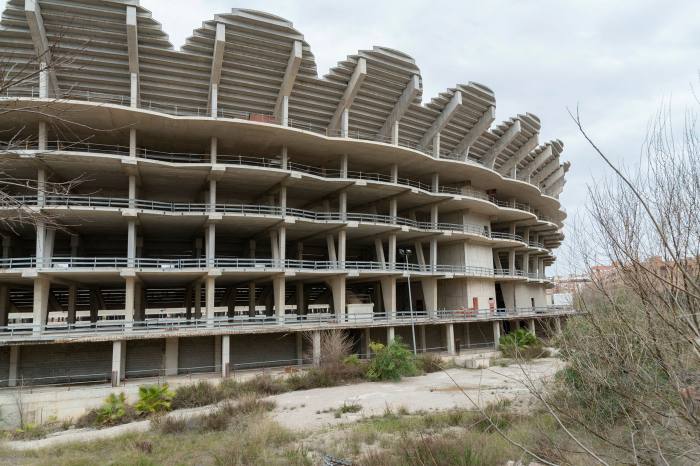 Before buying Valencia, Lim was, however, involved in “third party ownership”, acquiring a player’s economic rights and recouping a return from future transfers. The practice was banned by Fifa, international football’s governing body, a year after Lim bought Valencia through his Hong Kong-based investment vehicle Meriton.

Meriton’s past collaboration in TPO arrangements has come under scrutiny by Fifa, but Lim denies still being involved in such deals. According to the club’s accounts, Meriton has loaned the club roughly €50m, debt that is secured against the future sales of eight first team players.

Lim described the arrangement as a “lien” that ensures Meriton is ranked higher than other creditors if Valencia defaults. Spanish lender Bankia is also owed about €150m. Once Meriton’s loan is paid off, Lim insisted any trading profits would stay at the club.

Scoreboard is the Financial Times’ new must-read weekly briefing on the business of sport, where you’ll find the best analysis of financial issues affecting clubs, franchises, owners, investors and media groups across the global industry. Sign up here.

Unconvinced by such answers, Libertad VCF wants to convince thousands of individual Valencia shareholders to join forces with a combined 5 per cent stake. At that threshold, under Spanish law, the group may gain more ability to scrutinise club operations, such as access to contracts and even appointing a board member.

But Lim says accusations that he uses Valencia to speculate in player trading, or profit from the club in other ways, are wide of the mark.

“I can do 101 things to make money, and money that I believe I can better control,” he said. “This is something quite nice. I wake up, I own a football club and I see what happens next. It’s nothing more.

“And I do have some compassion for [fans], but among ourselves, among friends, we say the smallest things give you the biggest headaches.”