Jocsan Avilés Díaz comes from a town called El Progreso — progress — but for him, it was anything but. Unemployment drove him out of Honduras in 2019, bound for the US. “I hadn’t had a job in years,” he explained, still stuck on the Mexican side of the border two years later.

The plight of people like Avilés has only cemented Central America’s reputation for poverty and hardship. He comes from the fringes of the “dry corridor” where drought, on top of violence, poverty and extortion, has driven tens of thousands of desperate families from the so-called Northern Triangle of Honduras, Guatemala and El Salvador to try to enter the US via Mexico.

Unauthorised border crossings into the US from Mexico have soared this year to near 20-year highs. This poses an acute political problem for President Joe Biden, who has asked Vice-President Kamala Harris to deal with the crisis and has earmarked $4bn in aid for the Northern Triangle. How this will be spent is not clear.

“We want to help people find hope at home,” she told a regional conference this month as the US focuses less on interdiction, as it did under Donald Trump, and more on financing development. “And so we are focused on addressing both the acute factors and the root causes of migration.”

Since the end of the Central American civil wars in the 1980s, economic growth in the region has consistently fallen behind the rest of Latin America. Over the past 30 years, per capita gross domestic product growth averaged a paltry 1.2 per cent per year in the Northern Triangle, according to the IMF.

A 2004 free trade agreement with the US, known as Cafta-DR, aimed at increasing access to the major North American market, and one with the EU in 2012, were intended to boost trade. Exports from Central America did rise a modest 6 per cent a year on average during 1991-2017.

But while Costa Rica and Panama, the region’s two outperformers, prospered on the back of eco-tourism and financial services respectively, gains in the Northern Triangle and Nicaragua have proved elusive.

“Central America has Cafta but even so, it hasn’t managed to get ahead,” said Laura Chinchilla, who was involved in negotiations for the Dominican Republic-Central America-US Free Trade Agreement and later, as president of Costa Rica, was a signatory of the regional EU trade deal.

“For Costa Rica, Cafta meant a qualitative leap in exports and investment attraction. But not for Nicaragua, Honduras, El Salvador and Guatemala.”

Those four countries contain the bulk of the region’s population and just over half its GDP but are the four with the lowest income, according to the World Bank. They are blighted by corruption, impunity, gang violence and weak rule of law. Experts say their governments have invested far too little in education and infrastructure. 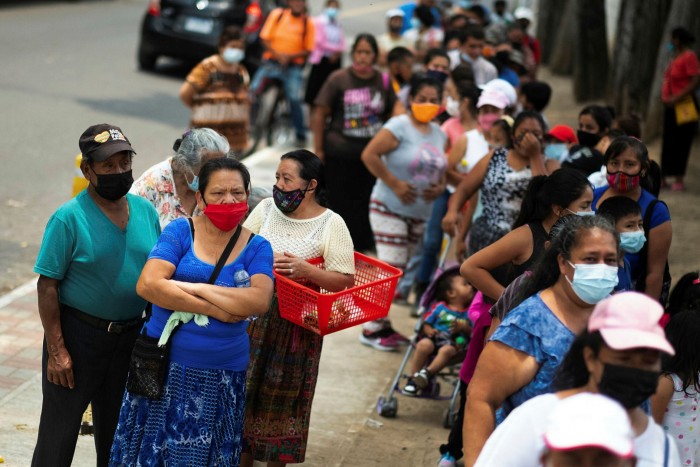 “Governments in the region haven’t been able to generate the opportunities for people to become prosperous because they simply don’t have the development plans,” said Ricardo Castaneda, senior economist at the Central American Institute for Fiscal Studies, a think-tank.

Advocates of Cafta hoped an increase in trade with the US would deliver better jobs and wages following on from the 1994 North American Free Trade Agreement that consolidated Mexico as a manufacturing hub even though it did not deliver nationwide development.

“Cafta-DR hasn’t worked as intended for a variety of reasons: it was seen . . . as a way to guarantee access to the US market rather than to integrate among themselves; it didn’t effectively mesh up with Nafta . . . and during the negotiations, the US restricted imports of a number of products where the region was highly competitive,” said Eric Farnsworth, vice-president of the Council of the Americas.

Higher exports brought employment, but most of the jobs were low-productivity and low-paid and there were not enough to go round: more than 600,000 young people a year in the region chase just 250,000 new formal sector jobs, according to the UN. 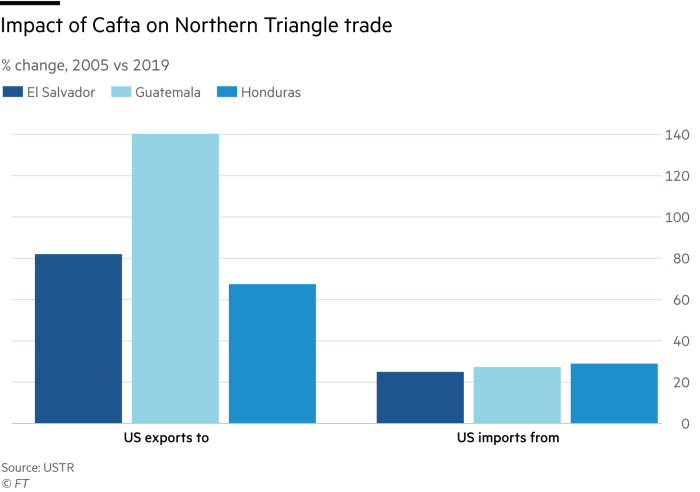 As a result, “instead of being successful and exporting goods and services, like Costa Rica did, these countries have exported their citizens,” said Chinchilla.

“Since around 2009, approximately 1 per cent of the population of the Northern Triangle has gotten up and moved every year,” Ricardo Zúñiga, Biden’s special envoy for the Northern Triangle, told a recent Council of the Americas webinar. “There’s absolutely no chance we are going to be able to address . . . this longstanding problem unless we create jobs in Central America.”

But with the size of the working-age population set to drop sharply in Central America by 2035, the World Bank cautioned in a new report that countries will need to boost productivity and integrate into North American supply chains to ensure strong growth.

For many of the region’s companies, that is a tall order. Most are micro or small businesses without the capacity to compete. “It’s like they’re in a Formula One race but on a bike without both wheels,” said Castaneda.

Poor governance is another problem. Zúñiga skipped Honduras on a recent trip to the Northern Triangle — a sign that President Juan Orlando Hernández, who has been named by US prosecutors as an accomplice in drug trafficking, is “a leper,” said Pedro Barquero, head of the Chamber of Commerce and Industry of Cortés in Honduras. Hernández denies the allegations. 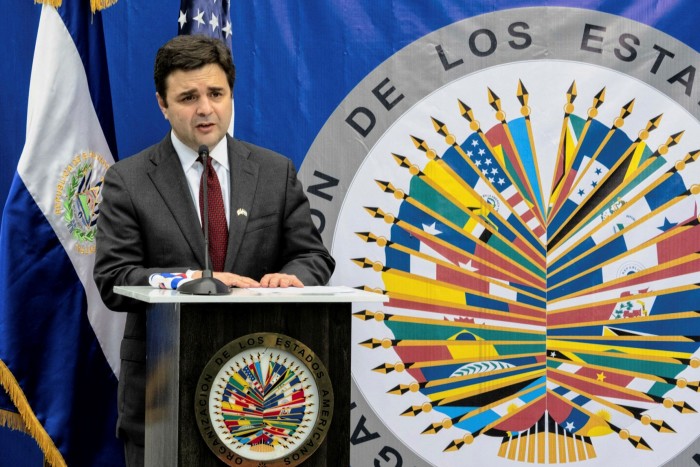 Ricardo Zúñiga, US special envoy for the Northern Triangle, said the problem would only be solved by creating jobs in Central America © Juan Carlos/Bloomberg

In El Salvador, Zúñiga was stood up by President Nayib Bukele, who is criticised for excessive authoritarianism.

“In reality, free trade agreements won’t do any good if countries don’t put in the work,” Barquero said, noting that Honduras’ precipitous decline in Transparency International’s corruptions perception index in the past five years was matched by a plunge in its image as a place to do business.

Biden hopes to tackle the causes of migration from Central America with a $4bn aid package, but this will require long-term commitment from Washington, and success, if it comes, will take many years.

“The reality is that the US has had few, if any successes, at nation-building in Latin America or anywhere else, at least since the Marshall Plan,” said Michael Shifter, president of the Inter-American Dialogue in Washington. “It is important to pose an uncomfortable question: where has the US succeeded in what it is trying to do today in Central America?”