Chinese jabs are dominating vaccination campaigns in Latin America, the region worst hit by coronavirus, in a win for Beijing that builds on its “mask diplomacy” supplies of ventilators and protective equipment last year.

As Latin America struggles against a deadly third wave of the pandemic, China has shipped more than half of the 143.5m doses of vaccines delivered to the region’s 10 most populous nations, according to a Financial Times analysis of data provided by governments.

Chinese companies, led by Beijing-based Sinovac, have delivered 75.8m finished doses or key ingredients for doses to those 10 nations so far. The two main western suppliers to Latin America, AstraZeneca and Pfizer, have delivered 59m doses between them, with some AZ doses supplied via the World Health Organization’s Covax facility.

Russia, despite considerable diplomatic noise around its vaccine efforts, has only supplied 8.7m doses of its Sputnik jab, mostly to Argentina.

American manufacturers have signed deals to supply Latin American nations with vaccines in the future, but the only sizeable deliveries to date to the region’s 10 biggest nations from a US manufacturer are those of Pfizer, which has supplied 19.5m doses, according to the data.

“There are more Chinese jabs in arms in Latin America and in some other developing nations,” said Clare Wenham, assistant professor of global health policy at the London School of Economics. “This mirrors trends in global health, where we are seeing increased Chinese dominance as a health power.”

Chinese dominance would likely be even greater had it not been for a recent slowdown in deliveries to Brazil, the biggest buyer of vaccines in the region. This came after negative comments about Beijing from President Jair Bolsonaro and economy minister Paulo Guedes, triggering the suspicion that China was punishing them for their remarks.

The Butantan Institute, which fills and finishes China’s CoronaVac vaccine in Brazil, said supplies could run out as soon as next week due to a shortage of critical ingredients from China. “Our feeling is that there is difficulty, a bureaucracy that is being slower than usual with very low authorisations of volumes,” said its head Dimas Covas.

Bolsonaro said this past week that “nobody knows if [coronavirus] was born in the laboratory or by a human being [who] ingested an inappropriate animal. But it is there. The military knows what chemical, bacteriological and radiological warfare is. Are we not facing a new war? Which country grew its GDP the most?” 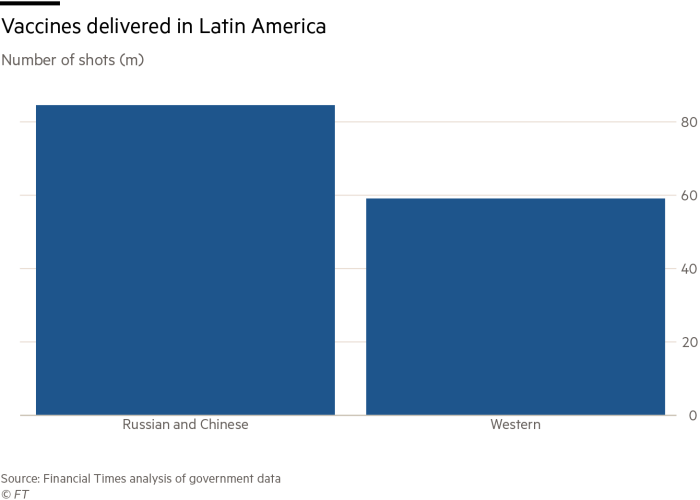 Latin American officials have appealed to the US, the traditional power in the region, to do more to help. In March, President Luis Abinader of the Dominican Republic asked President Joe Biden to release US stocks of the AstraZeneca vaccine.

“President @JoeBiden, less-developed countries and traditional allies of the USA, like Dominican Republic, have approved the AstraZeneca vaccine and we need it urgently,” he wrote on Twitter.

The foreign minister of Paraguay, which is struggling to access Chinese shots because it has full diplomatic relations with Taiwan, implored the US at the end of March to come to the rescue as its Covid-19 caseload rose. “What use is fraternity if now they don’t give us a reply?” Euclides Acevedo asked.

Antony Blinken, US secretary of state, told an Americas Society conference this week that Washington had shared 4m vaccine doses with Canada and Mexico and would share another 60m doses from its supply over the next two months, though he did not say with which countries. He highlighted the US’s $2bn contribution to the Covax facility, which has supplied 6.5m doses so far to Latin America and its pledge of a further $2bn.

But the American vaccine-sharing offer and the Covax deliveries are dwarfed by the huge demand for vaccines among Latin America and the Caribbean’s 650m population. Latin America’s three most populous nations — Brazil, Mexico and Colombia — are among the worst hit countries in the world by the latest surge of the virus.

Wealthier citizens are flocking north on flights to the US to get vaccinated in cities such as Miami while the poor wait for jabs in government programmes hamstrung by the shortage of supplies. Vaccination rates across Latin America have lagged those in the US and Europe, with the notable exception of Chile.

Money is not the issue — Latin American governments can afford to buy the vaccines they need. But they have been disadvantaged relative to the US and Europe because most of the region’s capacity to manufacture vaccines from scratch was shut down in past decades and moved to lower-cost Asian locations. It must also rely on scarce imports of the active pharmaceutical ingredients. Brazil, Mexico and Argentina all have projects under way to rebuild domestic vaccine manufacturing or finishing capacity.

“China has long sought to up its game on soft diplomacy across the region and Covid has provided the opportunity for it to be seen in a positive light at a time of great need,” said Jason Marczak, director of the Atlantic Council’s Latin America centre. “The US has an opportunity to surpass China and regain our footing . . . but it needs to get doses to Latin America ASAP.”

The US state department said the Biden administration was working on plans to share AstraZeneca vaccine doses when they became available. “There are no AstraZeneca doses to share at the moment,” it said.