An exodus of EU lorry drivers from the UK since Brexit has left the British haulage and logistics industry facing an acute staff shortage and a looming crisis for industrial and retail deliveries, the sector has warned.

Industry associations and leading UK freight companies said that unless urgent steps were taken to address shortages, strains now visible within the industry would become evident to the public by the end of the summer.

While the sector has endured chronic driver shortages in recent decades, these have become acute thanks to a “triple whammy” of Brexit ending recruitment from the EU, a backlog of driving tests caused by Covid-19 and self-employment tax reforms that have exacerbated the outflow of EU drivers.

“Britain has had a chronic driver shortage for many years, but the problem is now acute. In 10 years of campaigning on this issue we have never seen members as concerned as they are now,” said Alex Veitch, policy manager at Logistics UK, the trade body that was formerly the Freight Transport Association.

The cancellation of an estimated 28,000 HGV driver tests as a result of the Covid-19 restrictions has also stymied efforts to expand domestic recruitment of drivers into the pool of some 300,000 qualified lorry drivers in the UK.

Rod McKenzie, managing director of policy and public affairs at the Road Haulage Association, said the industry was now facing a perfect storm. “To the public as opposed to the industry this is something of a quiet storm but it could soon turn into a hurricane with shortages evident, escalating stress and tension among suppliers and hauliers,” he said.

Haulage company bosses said the ending of the Covid-19 lockdown, which had caused a sharp uptick in demand from retail, construction and hospitality, had exposed a problem that had remained hidden by the drop-off in demand caused by the pandemic.

Paul Day, the managing director of Turners Soham Ltd, a major trucking company with 2,300 lorries in Cambridgeshire whose driver workforce is made up of approximately 40 per cent eastern Europeans, said cracks were already starting to show.

“Within three months, goods won’t get delivered. In fact, it’s already happening, there are already loads that are not being covered now,” he said, mentioning one major retailer and a large construction materials supplier that had failed to cover 30 loads last week.

Lee Juniper, the operations director at FreshLinc, another major UK logistics operator with a pool of nearly 700 trucks said the shortages were real and now forcing up hourly wage rates by 10 to 30 per cent depending on the region and type of haulage involved.

“We can’t get enough drivers to drive our trucks and it is a challenge every day to cover off the volumes. It’s a struggle to constantly keep delivering loads on time and to customers’ schedules,” he said.

Last month the Grocer magazine, a trade publication, also reported that wholesalers were capping deliveries to some Spar convenience stores in the midlands where driver shortages have been most keenly felt.

The driver shortage is an early test of the government post-Brexit immigration policies which prioritise high-skilled immigration and make it legally impossible to recruit foreign HGV drivers, an occupation that is not deemed sufficiently skilled to be eligible for the skilled worker visa. 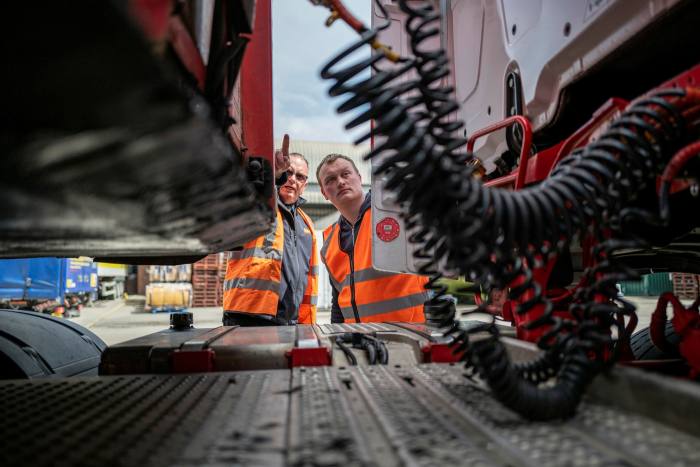 Many were self-employed, operating as small limited companies to reduce their tax burden, but this has now been stopped following so-called IR35 reforms by HM Revenue & Customs that require all contractors with turnover above £10m or 50 staff to pay full tax and national insurance on their drivers.

While widely welcomed by the industry, the reforms were adding to the exodus of EU drivers who won’t accept the drop in incomes that come with regularising their tax status.

“The initial departure was driven by Covid, but we estimate that another 5,000-10,000 are leaving now because of IR35. A lot didn’t pay correct limited company taxes, but even with inflated wages, it’s still not enough to get the same net income,” he said

Companies and industry associations have lobbied hard for HGV drivers to be put on the shortage occupations list but the government has made clear it will not do this, having said that businesses must “adjust” to the post-Brexit immigration regime. 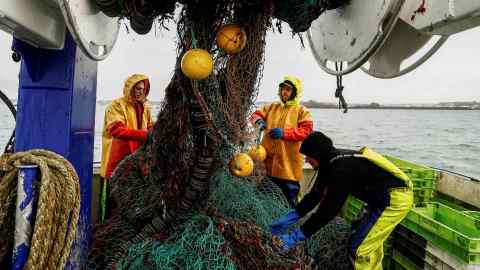 Day, the boss of Turners, which has been actively recruiting in the EU since 2005 and has its own UK driver training programme, said this was still the simplest solution because of the six-month lag time taken to recruit and train UK drivers and the limited availability of candidates.

“The government needs to act before things get out of hand. If the government is not going to change its position on this, then it will put 15 to 20 per cent on transport costs in the UK. Is that something UK plc is really ready for?” he said.

Veitch said the government needed to do more to back its policy of UK recruitment to take up the slack left by EU drivers, including prioritising cancelled driving tests and providing grants to cover the cost of driver training.

The government said it had started a campaign to recruit 300 more examiners, with the DVSA, the testing agency, now making 4,000 tests available each week. 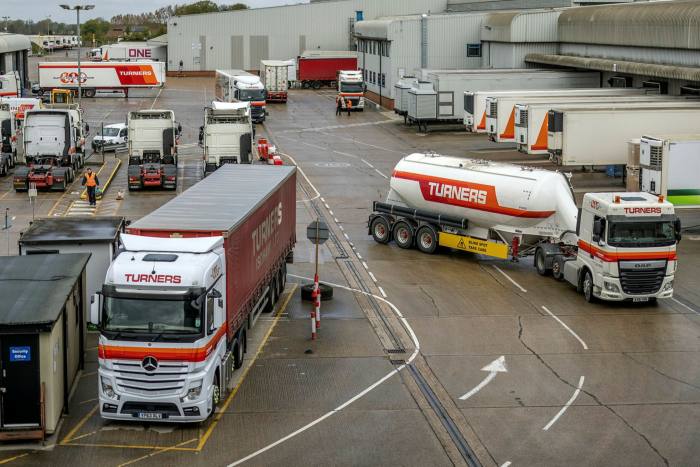 However, across the industry the Financial Times heard significant doubts that domestic recruitment could fill the gaps in the short term, while longer term it was unclear if enough UK workers would embrace an industry with long working hours and tough working conditions, even if pay-rates rose.

Smith, of Driver Require, added that analysis of data from the Office for National Statistics showed a “catastrophic decline” over the past 20 years in the number of qualified HGV drivers staying in an industry where nearly a third of the 300,000 drivers are over 55 and heading for retirement.

“We’ve got this cohort of 150,000 drivers over 50 heading into retirement and behind that group is a severely depleted workforce. There’s not a great deal we can do in the short term except brace ourselves for impact,” he said.