Isabel Díaz Ayuso’s stunning success in the Madrid regional government election, in which she doubled the People’s Party vote share with a combative campaign, is a lesson for centre-right parties across Europe that are struggling to maintain their broad appeal.

The conservative firebrand has reinvigorated the PP, a party that just two years ago crashed to a humiliating general election defeat, shedding votes to the liberal Ciudadanos party and the far-right upstart Vox.

The incumbent head of the Madrid region ran a populist campaign that tapped into public frustration with the coronavirus lockdown restrictions imposed by the Socialist-led national government.

While opponents of the 42-year-old tried to label her a Spanish Donald Trump in cahoots with the far-right, her ability to cut through to voters has impressed other European conservatives.

“She speaks very directly in an understandable way,” said Tomi Huhtanen, executive director of the Wilfried Martens Centre for European Studies, the official think-tank of the European People’s Party. “It is resonating.”

Díaz Ayuso’s electoral success this week was a rare bright spot for Europe’s mainstream centre-right and Christian Democrat parties, whose identity crisis is set to be the dominant theme in a crucial electoral year.

CDU’s grassroots have been unimpressed by the leadership of Armin Laschet, who is vying to succeed Angela Merkel as German chancellor © Federico Gambarini/dpa

“Everybody has been talking of the decline of social democracy, but I’d say the crisis of Christian Democracy is the most consequential,” said Jan-Werner Müller, a politics professor at Princeton University. “If you ask what Christian Democracy stands for most people won’t know.”

Germany’s Christian Democrats trail the Greens in opinion polls ahead of September’s federal elections, with the CDU’s grassroots seemingly unenthusiastic about the leadership of Armin Laschet, who is vying to succeed Angela Merkel as chancellor.

The party is torn over whether to collaborate with the far-right Alternative for Germany party at a regional level, with pressure growing in the east of the country for it to drop its cordon sanitaire against co-operation.

In France, the centre-right Republicans are in turmoil after their Provence-Alpes-Côte d’Azur chapter proposed a joint list with President Emmanuel Macron’s party for next month’s regional elections.

Ostensibly, it was an attempt to block the far-right. But many Republicans suspect Macron, who has shifted to the right on law and order, of trying to undermine them before next year’s presidential contest where his best chance of re-election lies in a rematch with far-right leader Marine Le Pen.

In Italy, Forza Italia is a shadow of its former self, polling at just 7 per cent. It has been replaced as the principal party of government on the right by the nationalist League. 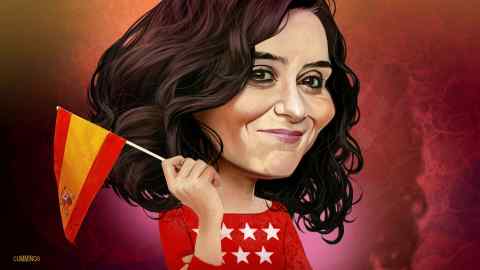 Matteo Salvini, League leader, has recently shifted to the centre, softening his Euroscepticism and supporting the government of Mario Draghi, the former European Central Bank chief.

The League also risks being outflanked by a party to its right, the Brothers of Italy. The fate of Draghi’s government may hinge on Salvini, who was one of the first senior European politicians to praise Díaz Ayuso’s victory.

The centre-right’s troubles, paradoxically, come as public sentiment in Europe appears to be shifting to the right. A study for the Fondation Pour L’Innovation Politique think-tank found that 39 per cent of voters in France, Germany, Italy and the UK placed themselves on the right of the political spectrum, compared with 27 per cent on the left and 20 per cent in the centre.

But, with the notable exception of Britain’s Conservatives, which made significant gains in local elections this week despite a decade in power, mainstream parties are struggling to channel this sentiment, unlike their new competitors on the far-right.

“Traditional parties are all being challenged by political entrepreneurs that are able to mobilise on certain issues that do not sit neatly in the centre-right template, such as immigration, European integration, anti-Islam and saving Christianity,” said Catherine de Vries, political science professor at Bocconi University. “It’s very difficult for the centre-right because these issues often split their traditional coalition.”

A recurrent theme will be the extent to which mainstream European parties risk reputational damage by working with far-right “challenger parties”, said Fabio Wolkenstein, assistant professor at Aarhus University. “Fewer and fewer countries will be able to sustain the cordon sanitaire [against the far-right] you see in Germany,” he added. 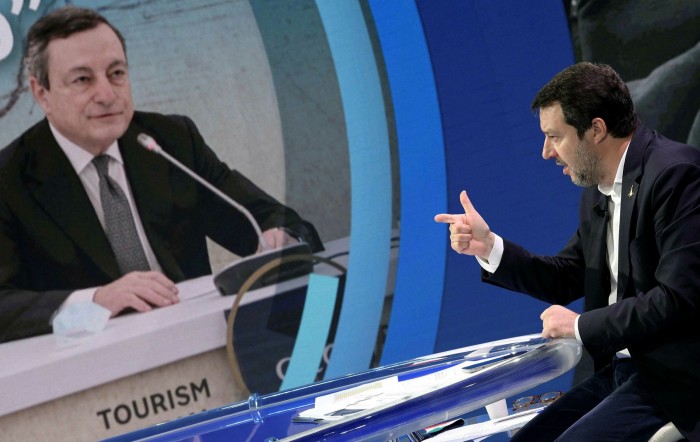 Italy’s League leader Matteo Salvini has shifted to the centre, softening his Euroscepticism and supporting the government of Mario Draghi © Claudio Peri/EPA-EFE/Shutterstock

Díaz Ayuso has said she is open to governing with Vox — even though her party has in theory ruled it out at national level — but she did well enough to run Madrid without a formal coalition.

Her campaign theme of “Freedom” to earn a living and enjoy the city’s famed nightlife against the demands of an overbearing, leftwing government played well with working-class voters as well as the PP’s well-healed supporters.

“This was an election fought in bars,” said Camino Mortera-Martinez, of the Centre for European Reform, who thinks it would be hard to replicate elsewhere in Spain, let alone in Europe. “The stance Díaz Ayuso took completely destroyed party lines. It was borderline populist if not populist altogether.”

José Ignacio Torreblanca, head of the Madrid office of the European Council on Foreign Relations, said that although the left tried to paint Díaz Ayuso as Trump “she is more of Reaganite, able to produce banal statements but also to tap into the emotions of people tired with the crisis”.

“She’s aware of the fact that ideologically there’s a deep trench between the PP and Vox,” he said, citing climate change and gay marriage as examples.

Torreblanca also noted that while she is liked by far-rights voters her electoral gains came mostly from the collapse of Ciudadanos. The Spanish right is now split two ways rather than three.

“Her success has been to start unifying the right. But she did not annihilate Vox. So the problem remains,” he said.