The European Central Bank should follow the lead of the US Federal Reserve by accepting an overshooting of its inflation target to make up for many years of sluggish price growth, said one of its top officials.

Olli Rehn, who sits on the ECB’s interest rate-setting council as governor of Finland’s central bank, told the Financial Times changes in the eurozone labour market and world economy had weakened wage inflation pressures and meant “the economy can cope with lower levels of unemployment . . . without rapid inflation”.

“If this is the case, from the point of view of economic and social welfare it makes sense to accept a certain period of [inflation] overshooting, while taking into account the history of undershooting,” Rehn said. “That is why, in addition to price stability, a focus on full or maximum employment makes sense in the current context of a lower natural rate of interest.”

The ECB has failed to meet its inflation target of close to but below 2 per cent for most of the past decade, despite cutting interest rates deep into negative territory and buying more than €4tn in bonds.

Rehn said the way the target was worded had “generated a perception of asymmetry and some ambiguity”. The Bank of Finland estimates that the ECB’s de facto inflation target is 1.6 to 1.8 per cent, with Rehn adding: “What is worse is that 2 per cent has been perceived as a ceiling and that is dampening inflation expectations.”

The ECB is widely expected to change its inflation target this autumn, when its first strategy review for 18 years concludes. The EU treaty which founded the ECB set its primary mandate as price stability, leaving it to decide how to define this. It initially set a goal for inflation to be below 2 per cent, but later changed this to close to, but below, 2 per cent.

Last year, the Fed completed its own strategy review and promised to let inflation overshoot its target to make up for a period of underperformance, a stance that is being tested as the pace of price growth is expected to rise above its 2 per cent target this year.

Other members of the ECB’s governing council have also spoken up in favour of following the Fed’s move. Philip Lane, the ECB’s chief economist, told the FT recently that “there is a very strong logic” to Fed-style flexible average inflation targeting.

Eurozone inflation rebounded in April, rising to 1.6 per cent, after turning negative in the final months of last year. The ECB has predicted price growth will rise above 2 per cent later this year, before fading next year and remaining below its target by 2023.

If the ECB shifted to accepting a period of inflation overshooting its target, it would give the central bank more flexibility to continue buying bonds as the eurozone economy recovers from the fallout of the coronavirus pandemic.

The central bank has said it will end the €1.85tn emergency bond-buying programme it launched last year when it judges the pandemic crisis is over. Until then, it has committed to using the bond purchases to maintain “favourable financing conditions”, which analysts interpret as meaning it aims to keep bond yields low.

This month, the ECB council is due to have a seminar on the interaction between monetary and fiscal policy as part of its strategy review. Rehn said this was likely to include a discussion of how the two would interact as the economy exits from the crisis.

He said the ECB should shift to a different role after this critical period, which he compared to that of a libero, or sweeper, in football — a player who roams behind the defensive line to pick up stray balls and recycle them back to the attackers. Rehn played football for a Finnish first division team in his youth and is now vice-chair of the Fifa governance committee. 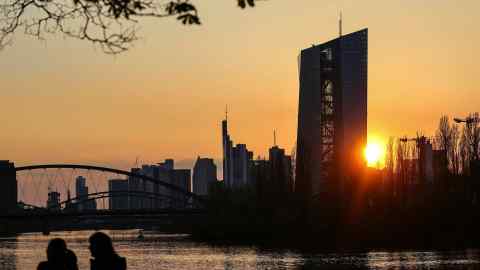 “If you look at the policy mix of fiscal and monetary policy in exiting from the crisis . . . monetary policy should play libero in the sense that it will ensure favourable financing conditions so that we will continue to provide a bridge over troubled water,” he said.

Rehn added it was “very important” for governments to plan to reduce their debt levels, which have shot up in response to the pandemic. “Europe still needs very accommodative monetary policy. This stance will, however, not be maintained forever and at some point the financing costs of the [eurozone’s] sovereigns will increase,” he said.

Rehn is a former Finnish economy minister and was the EU’s economic and monetary affairs commissioner during the eurozone sovereign debt crisis in 2012, when he helped to negotiate the austerity measures imposed on Greece as part of its bailout.