Scotland’s union with England to be sorely tested

Nicola Sturgeon has won a historic fourth consecutive term in government for her Scottish National party and can rely on majority support in the Edinburgh parliament for another Scottish independence referendum. But now comes the hard part for Scotland’s first minister.

Delivering on promises to hold a referendum made in the election manifestos of the SNP and pro-independence Scottish Green party will require overcoming the opposition of a UK Conservative government unimpressed by Sturgeon’s strong performance in Thursday’s parliamentary election.

The stage is set for an extended constitutional stand-off over the future of Scotland’s 314-year-old union with England that is likely to leave the unity of the UK in question for years to come.

Michael Gove, UK Cabinet Office minister, on Sunday waved aside Sturgeon’s demand for a rerun of the 2014 independence referendum — in which Scots backed staying in the union by 55 per cent to 45 per cent — and said Westminster’s “exclusive attention” was on recovery from the coronavirus crisis.

Douglas Ross, the Scottish Conservative leader, was blunter. The SNP’s failure to win a majority in its own right in the Edinburgh parliament meant it did not have a mandate for another referendum and UK prime minister Boris Johnson would reject any request to approve one, added Ross.

“We promised to stop indyref2,” he said, using a colloquial term for a second independence vote. “We have.”

There are risks in drawing such a conclusion from Thursday’s election outcome, even though the SNP fell one seat short of a parliamentary majority. The SNP’s 64 newly elected members, together with the eight Scottish Greens, means there is a majority for an independence referendum in the 129-seat chamber that is just as big as the one that led to the 2014 vote.

Sturgeon insisted on Saturday that UK approval of a second referendum, which she wants to hold no later than the end of 2023, was now a “matter of fundamental democratic principle”. The Scottish first minister has already set out plans to pass enabling legislation for a referendum, challenging the UK government to try to stop it in court.

The SNP plan rests on the belief of Scottish ministers and some legal experts that Edinburgh can unilaterally hold an advisory referendum under current UK devolution law, even though constitutional matters are reserved for Westminster.

On Sunday, Gove shied away from questions about whether the British government would seek to block such a move in the UK Supreme Court. “We are not going near there,” he said.

Even if a court ruled a unilateral referendum legal, Westminster would still be able to pass new legislation to block one — though this would risk further boosting pro-independence sentiment.

Johnson’s allies said his strategy was currently focused on a message that now is not the right time to hold a referendum because of the Covid-19 pandemic.

But they added he would do whatever it takes to stop another referendum. For Johnson the issue is existential for both his country and his premiership. “Gove told the cabinet last year that not many governments survive the break-up of their own country,” said one cabinet minister.

Asked on Sunday if Scotland was “allowed” to leave the UK, Gove said: “Of course it is . . . through a legal referendum which would allow people to make that choice.”

But Ciaran Martin, the British government’s lead negotiator on Scotland’s 2014 referendum, said such assurances were meaningless while the UK refused to set out when it would allow such a vote.

Nor was there any justification for dismissing majority support for a second referendum in the Scottish parliament just because it relied on more than one party, said Martin, now a professor at Oxford university’s Blavatnik school of government. “Constitutionally it makes no difference at all,” he added.

Martin said that refusing to allow Scotland a legal route to independence would fundamentally transform the UK from a union “based on consent, to one based on the force of law”.

Such a change would be highly likely to alienate constitutionally moderate Scots.

“If one wanted to sustain the argument that Scots can’t express their own values and priorities as part of the UK, it would be hard to provide more powerful evidence than prohibiting the referendum,” said Stephen Reicher, professor at the University of St Andrews’ school of psychology and neuroscience.

“Limiting people’s autonomy increases their desire to reassert autonomy when they have the chance,” he tweeted. “Even if he blocks an independence referendum in the short term, Johnson’s actions make independence more likely in the long term.” 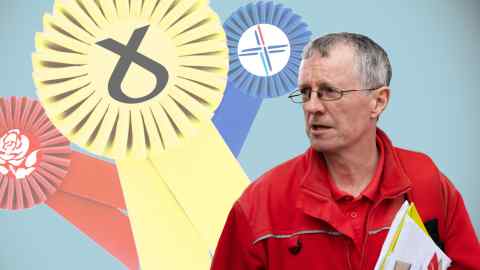 Some Conservatives said it would be better to agree to a referendum, trusting that the SNP’s struggle to set out a convincing economic case for independence would ensure separation was again rejected by voters.

John McLellan, a former editor of The Scotsman newspaper and now a Conservative councillor, said Johnson should call Sturgeon’s bluff by approving a referendum as long as it was held in the next year.

“We need to prove once and for all that Scotland does not want independence, because otherwise all we are going to hear about over the next four or five years is that the democratic will has been denied,” he added.

Such calls appear unlikely to be heeded however. Johnson and his team have been buoyed by recent opinion polls suggesting Scottish voters want to see Covid-19 beaten before independence is discussed.

Sturgeon herself insists that action must wait until the pandemic is past and her published plans for the first 100 days of her next government do not include any preparations for a referendum.

With Scottish opinion on the merits of independence almost evenly split — over the past month, an average of the polls put support for staying in the UK at 46 per cent compared with 45 per cent for leaving — Sturgeon has reason not to rush into a referendum she cannot afford to lose.

Legislation and any resulting legal challenge would also take time, said Martin. “It will be a slow game of constitutional chess,” he added.