SPD struggles to break through as Greens dominate German campaign

Daniela Kolbe, an MP for Germany’s centre-left Social Democrats, is baffled by her party’s recent decline in the polls.

With just five months to go until national elections, the SPD is unusually united, boasts policies that are “clearer than they have been for years” and has a candidate for chancellor — finance minister Olaf Scholz — who is one of Germany’s most respected politicians.

So why is it polling at a measly 14 per cent? “It’s a question we’re asking ourselves all the time,” she told the Financial Times.

For decades a pillar of Germany’s postwar political system, the SPD is at risk of dwindling into irrelevance. As the elections near, most Germans are focused on the duel between the centre-right and the Greens, a party that has rarely been out of the headlines since nominating Annalena Baerbock, a 40-year-old MP, for chancellor last month. The Greens are enjoying the kind of media honeymoon the SPD can only dream of.

This weekend offered a rare opportunity for the Social Democrats to break through. At a digital conference, 96.2 per cent of delegates backed Scholz as their candidate — a stunning show of unity for such a fractious and turbulent party. And 99 per cent backed an election manifesto containing a commitment to carbon neutrality by 2045, more investment in hospitals, schools and public transport, and a €12 per hour minimum wage.

Speaking to delegates from an exhibition centre in Berlin, Scholz offered the vision of a “society of respect”. “Everyone has a right to be recognised,” he said. That meant higher wages for care workers, more child benefit, more social housing, and a nationwide cap on rents.

Scholz said he would campaign on his “experience, strength and ideas — as mayor of the city of Hamburg, as minister, as deputy chancellor, as a committed European”. He took aim at the SPD’s rivals, saying that another government led by Angela Merkel’s centre-right CDU/CSU would represent a “risk” to Germany. Of the Greens, he said: “Good intentions are not enough.”

Yet it is still unclear how Scholz will succeed in turning round the Social Democrats’ dire electoral prospects. Experts say the party is exhausted and out of new ideas after serving as junior partner in three Merkel-led grand coalitions: many voters no longer know what it stands for.

“A lot of the poorer people in precarious jobs who used to vote SPD now support the [rightwing, anti-immigrant] Alternative for Germany, while the party’s well-educated, urban voters have defected to the Greens,” said Uwe Jun, a political scientist at Trier university. “And there’s little prospect of the SPD winning these people back — at least not in the short term.”

Meanwhile, the party’s decline in the polls is triggering a real sense of panic in the parliamentary party. “A lot of people are scared they’ll lose their seats,” the leftwing SPD MP Hilde Mattheis told Spiegel. “They’re fighting to stay on the SPD island — regardless how small that island will be after the election.”

Publicly at least, the party is putting on a brave face. Officials say it is much better prepared for the campaign than the Greens and the CDU/CSU, which is still recovering from a divisive battle over who should lead it into the election. CDU leader Armin Laschet narrowly won the nomination after beating Markus Söder, the popular prime minister of Bavaria and head of the CDU’s smaller Bavarian sister party, the CSU. But he continues to lag behind Baerbock and Scholz in the polls.

The CDU/CSU is also still tainted by revelations that some of its MPs earned huge commissions on deals to procure face masks during the pandemic, surveys show. “A lot of voters are disgusted with what’s been happening in the CDU/CSU,” said Kolbe. “And Merkel’s departure is exposing how empty the party is — they have no real policies.”

The Greens’ platform is also vague, say SPD officials. “The closer we get to the election, the more closely voters will scrutinise the parties’ plans and the Greens won’t be able to muddle through any more,” said SPD MP Johannes Fechner. “They will have to nail their colours to the mast.” 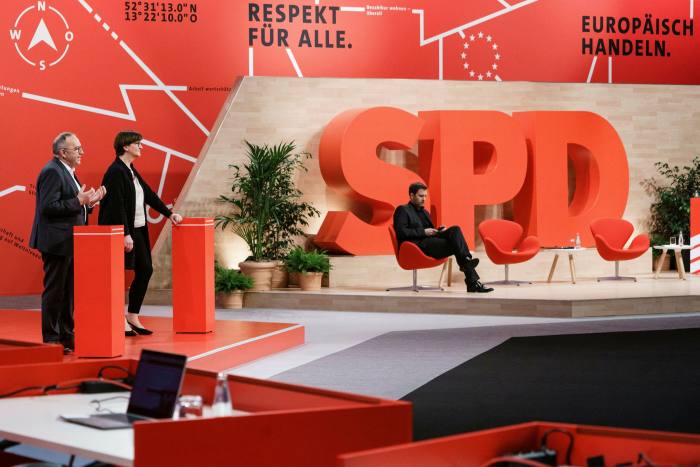 A recent poll by INSA for the Bild am Sonntag newspaper also showed that most voters trusted Scholz more than the other two to restore Germany’s public finances, create jobs, safeguard economic growth and represent German interests abroad. 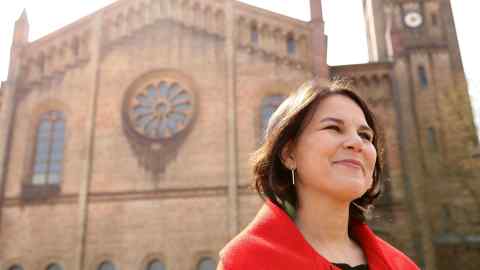 Scholz’s team is confident that he will scoop up the many floating voters who have voted CDU/CSU because they like Merkel but who have no real allegiance to the Christian Democrats. “He’s like Merkel in that he’s calm, capable, modest, reliable — but unlike her he actually has a plan,” said one aide.

However, despite showing strong support for Scholz as a candidate, the polls also indicate that his party is heading for its worst election result in postwar German history. At 14 per cent, it is 11 points behind the CDU/CSU and 12 points behind the Greens.

Social Democrats say that a lot can change between now and the election. They also have a warning for the Greens: in 2017, the SPD candidate for chancellor, Martin Schulz, was surging in the polls and seemed on course for a stunning victory over Merkel in the Bundestag election that year. But the SPD got just 20.5 per cent, its worst result since the war.

“The Greens are on a roll at the moment,” said Kolbe. “We had the same thing with Martin Schulz, so we know how it feels. But we’ll just have to see whether that’s really sustainable.”