Can Sanjeev Gupta escape the crisis engulfing his business?

From his villa on Dubai’s exclusive Palm Jumeirah development, the metals tycoon Sanjeev Gupta is orchestrating a complicated juggling act.

His far-flung business empire — he has acquired mines, smelters, steelworks and power plants from the US to Australia at dizzying speed over the past decade — is struggling to stay solvent after the collapse of its main lender, Greensill Capital.

At the time of Greensill’s collapse in March, the supply chain finance group had lent Gupta’s GFG Alliance as much as $5bn. Gupta’s task is to negotiate new finance for assets spread across the continents. It is made harder by a complex web of pledges given to existing lenders, undertakings to the governments that supported him and a mountainous burden of debt that funded the buying spree.

Together with a close-knit group of advisers, the 49-year-old industrialist has been poring over assets of GFG, which last year boasted revenues of $20bn and employed 35,000 people.

The spaghetti structure is helpful in some ways: the fact that GFG is not a consolidated group but a collection of separate legal entities should make it easier to sell or refinance parts of it. “The beauty of an unconsolidated group is that Gupta can firefight on an asset by asset basis,” said one industry executive.

Time is limited, however. In the UK, Gupta’s speciality steel plants, part of GFG’s business Liberty Steel, are in dire need of working capital. Production at the two main plants in Yorkshire has been intermittent over the past few months. In France, the government has provided a €20m loan to keep running two mills that Gupta only acquired last summer.

At the same time, some of Gupta’s companies face winding up petitions. Credit Suisse is seeking to wind up several Liberty Steel companies in the UK and Australia to reclaim money for customers who invested in Greensill loans via the Swiss bank’s funds.

Who will rescue Gupta?

An early restructuring plan, “Project Battery”, estimated the group’s equity value at $123m after debts of more than $3.5bn were taken into account, although this excluded its manufacturing operations in the US and India, according to people familiar with the project.

Despite the debt burden, industry sources said the current boom in commodities, steel and aluminium prices are trading at multiyear highs, is helping to drive interest.

“It’s a function of the credit and commodity markets,” said one person familiar with the situation. “People are in search of yield everywhere.”

Gupta is likely to want to retain control over the main parts of his empire if at all possible, notably in Australia, the UK and some of his European mills.

In Australia, Gupta has had some success. GFG said last week it had agreed terms for a new financing arrangement which, if signed, would be “sufficient to pay out its Greensill debt in full” and to provide “ongoing working capital” for its Liberty Primary Metals Australia entity, which owns Whyalla’s steelworks and a coking coal mine at Tahmoor.

White Oak Global Advisors, a California-based private finance firm, has stepped in to provide the new financing, according to people close to the situation. The company is no stranger to Liberty, having previously provided a A$200m ($155m) facility to Liberty’s Australia businesses, at a double-digit annual interest rate.

People who are familiar with White Oak said the group will have negotiated a similarly high return. “They provide very expensive, asset-backed financing,” said one person. “It won’t be long-term.”

White Oak has also offered a £200m loan to help keep Gupta’s British speciality steel plants afloat. The loan, if agreed with creditors, would stave off a collapse of the Yorkshire plants but would not be a long-term fix. According to Project Battery estimates, GFG’s UK steel assets had debts of $843m.

In France, Gupta appears to have lost the battle to hold on to two steel mills the group acquired less than a year ago. The Financial Times revealed last week that GFG has put Ascoval and Hayange up for sale after failing to raise fresh financing. The government in March provided a €20m loan to the two plants but under the condition that the company would be able to raise fresh financing. GFG said it was still hopeful of securing financing but confirmed a sales process was under way.

Industry sources said that although there is debt on the two mills, there will be interest from buyers. Hayange is the main supplier of rails to state-owned SNCF, a relationship that will make it attractive to potential buyers including other steel groups.

Also in France, three of the group’s smaller aluminium manufacturing plants, including a wheels factory, have sought protection from creditors. The company’s main aluminium smelter in Dunkirk remains unaffected although GFG is in a legal dispute with former owner Rio Tinto. 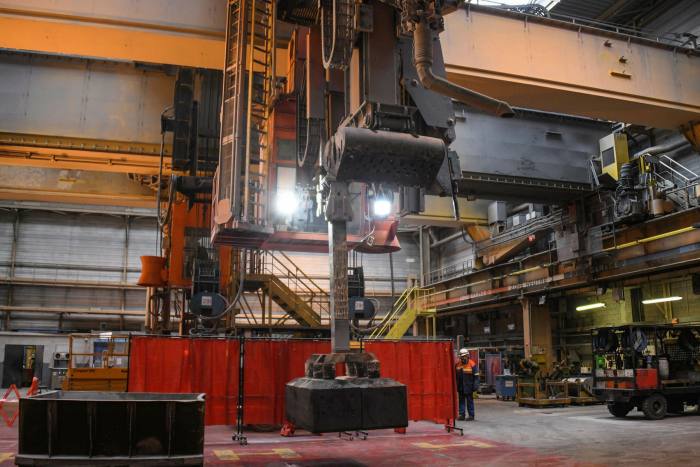 In eastern Europe, the Romanian subsidiary of Liberty Steel recently purchased carbon credits worth €40m from its Czech sister plant. The transaction, which has sparked controversy in the Czech Republic, was just in time to allow the Romanian plant to avoid costly penalties under the EU’s Emissions Trading System. The move has prompted concern among trade unions which wanted the money raised to be used for the Czech plant.

GFG’s US plants could be sold. The key assets are the manufacturing operations of the former Keystone Consolidated Industries which Gupta acquired in 2018. Unlike many of Gupta’s other businesses, their purchase was not financed by Greensill.

Despite his best efforts, Gupta’s biggest challenge remains convincing his creditors to agree to any refinancing deals.

Standing in the way in the UK is Credit Suisse. The bank, which is pursuing the industrialist for $1.2bn, said last week it had yet to be contacted over the proposed £200m White Oak loan and could not agree to terms if its clients were unfairly treated.

Executives at the Swiss lender have grown increasingly frustrated with Gupta’s failure to respond to their requests for information or present a credible restructuring plan, according to people with knowledge of the talks.

“It’s not that we don’t care about the 5,000 steelworkers. If we had clearer information from Gupta and a credible plan we could sit down and negotiate,” said a person close to the situation.

A person close to GFG said: “We’ve shared detailed financial information with Greensill’s creditors and will continue to work constructively to find an amicable solution that is in the best interest of all stakeholders.”

Applications for the winding up of three Liberty Steel group companies are due to be heard by a judge in the coming weeks.

An added complication is that three of Gupta’s companies are facing a lawsuit from Tata Steel, Britain’s largest steelmaker. Court documents have revealed that the group has defaulted on £12.5m deferred instalment due in May 2020 towards the purchase price of the Yorkshire speciality steel mills and instead offered incremental payments.

Will governments ride to the rescue?

Government grants and guarantees helped to underpin Gupta’s purchasing spree over the past decade, as politicians of all colours bought into his vision to revitalise ailing industries and revolutionise them with green energy. Support from those governments, however, is unlikely to be forthcoming in any meaningful way as long as Gupta remains in charge.

The UK government recently rejected a plea from the group for £170m in emergency funding to inject working capital into the Yorkshire mills. While ministers have left open the possibility of stepping in to save the plants and the jobs, they have made clear they will not inject money into GFG.

“It was the Gupta Family Group that asked for the money, and it’s not the most transparent organisation,” business secretary Kwasi Kwarteng, told MPs last month.