Tuesday is looking dicey for stocks, notably the technology space, as inflation jitters continue to ripple across markets. The sector has been bearing the brunt of concerns that higher inflation may prompt an early end to the Federal Reserve’s COVID-19 pandemic-driven accommodative stance.

After last week’s downside jobs surprise, some fear Wednesday’s consumer price data could also deliver a nasty shock. Not helping are fresh Chinese data on Tuesday showing surging factory-gate prices, though the consumer side was subdued. That is as investors continue to monitor fallout from a downed U.S. energy pipeline.

Inflation is the “worst-case scenario” for this ticking-time-bomb market full of complacent investors, warns our call of the day from Thomas H. Kee Jr., president and chief executive of Stock Traders Daily and portfolio manager at Equity Logic.

“Arguably, the ONLY reason stimulus has even been possible is because there has been no inflation. If inflation comes back, all of the safeguards investors have been given (free money from stimulus) will be dissolved and won’t be able to come back to save the day,” Kee told MarketWatch on Monday in an interview via LinkedIn. He said recent jobs data indeed suggest price rises will be “more serious than previously thought.”

Investors are disregarding the fact that stocks are very expensive right now, said Kee, who last November predicted a 25% drop for the Dow Jones Industrial Average
DJIA,
-0.10%
by year-end based on high price/earnings multiples.

“The declines can be much worse than 25% and if the FOMC [Federal Open Market Committee] is handcuffed because of inflation, the swift bounce back that investors have been used to will not happen either,” said Kee. “The fair value multiple on the SPX
SPX,
-1.04%
is not 30 – [to] 35x. It’s more like 15x.”

And the price/earnings to growth ratio, which adds in future earnings growth, for the Dow next year is “over 7, and normal fair value is 1.5. It is way overvalued based on that,” said Kee. 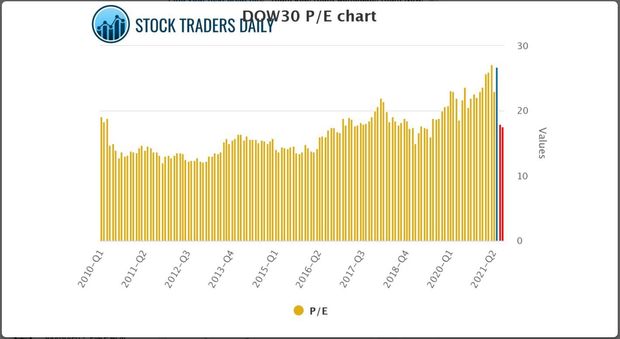 What would bring that down to earth is the return of natural-risk perceptions among investors — severely lacking right now. “They have been given free money by the government, stimulus programs are in full effect, and investors don’t perceive any risk at all. That is the most dangerous thing!” Kee said.

He advised investors continue rotating between the SPRD S&P 500 ETF trust
SPY,
-0.99%
and cash. Kee suggested last year staying that course until signs of reversals or that investors were getting worried about central bank stimulus stopping. No signs so far, he said.

“So as long as that is true investors won’t perceive risk the same way,” he said. “At a certain point, though, that changes when the big buyer is not there. That is when natural perceptions of risk come back, and if that happens when the PEG ratio on the Dow is over 7, watch out below!!”

Pumps running dry and Wall Street steels itself for losses

Cyberhacked Colonial Pipeline said fuel services should be “substantially” restored by the end of the week, which the energy market is counting on. For now, drivers are getting frustrated:

Read: Wall Street sees gains of up to 79 for these 20 cybersecurity stocks

Wynn Resorts
WYNN,
-0.44%
will spin off its online gambling unit via a merger with a special-purpose acquisition company.

A record number of small businesses said they couldn’t fill open jobs in April, according to a small-business lobbying group, the National Federation of Independent Business. That scramble is heating up, with food group Tyson Foods
TSN,

planning wage hikes to keep up with U.S. chicken demand and a lack of workers. That follows burrito chain Chipotle
CMG,
-2.40%,
which announced a potential path to a six-figure salary to lure potential employees.

A gunman opened fire at a school in Russia, leaving seven students and a teacher dead and several wounded.

Efforts to restrict births in China may be working too well.

Why Amazon
AMZN,
-3.07%
Chief Executive Jeff Bezos had to get in line for his $500 million superyacht.