The conversation outside the fruit and vegetable store in eastern Oslo underscores why policymakers in the Nordics are so worried about a Covid-19 paradox: those hardest hit by the pandemic in Norway and Sweden are being vaccinated most slowly.

A Somali woman in her 50s said: “Norway is banning the vaccines. I’m afraid they are not safe. I don’t know if I will have the vaccine myself.” Another female shopper from southern Asia was also sceptical: “There is still a lot of infection in Oslo. But people have died from the vaccine too.” A younger Somali man buying fruit with his mother replied: “I want the vaccine. My uncle died.”

The immigrant communities of Norway and Sweden, like many in Europe, have borne the brunt of the pandemic. Half of those currently hospitalised in Norway were born outside the country. Throughout the pandemic, those born in Somalia have been 10 times more likely to be hospitalised than those born in Norway to Norwegian parents, and those from Pakistan more than 20 times more likely.

But whereas almost all those born in Norway over the age of 75 (95 per cent) have received their first dose of a vaccine, only two-thirds of those from Pakistan and one-third from Somalia have, according to figures from Norway’s institute of public health (NIPH).

“It worries me,” Erna Solberg, Norway’s prime minister, told the Financial Times. Karin Tegmark Wisell, Sweden’s deputy state epidemiologist, said in a separate interview that the danger was that groups with low vaccination rates could have “cluster outbreaks, and that it can affect them even longer than it will the general population. That is very worrisome.”

Authorities are unsure as to the precise reasons both why these groups have been harder hit, and seem less receptive to vaccines. Theories such as immigrants being more likely to live in large families in cramped flats and work in frontline jobs such as taxi drivers or hospital cleaners have been advanced, but policymakers say this still does account for the discrepancy between them and native Norwegians.

Abdi Gele, a researcher at NIPH of Somali origin, said many in the local community in Norway were left uncertain by the suspensions of the Oxford/AstraZeneca and Johnson & Johnson vaccines. An expert group on Monday recommended that Norway drop both jabs, just as neighbouring Denmark has already done, after a number of blood clot deaths among younger recipients of the vaccines.

“There is a little bit of confusion created by the ban of AstraZeneca. People don’t know whether they will get AstraZeneca or Pfizer — they don’t have that knowledge or information. People are calling me and asking: Do I recommend them to take the vaccine or not?” Gele added.

People like Gele are crucial to the Norwegian effort to reach immigrant communities. Solberg said authorities were working closely with health workers from each of the ethnic groups. She added that Norway’s success in controlling the pandemic was because of high levels of trust in authorities, but that might not be the case in some immigrant populations. “People who come from other countries who are more used to a different type of political system and with less trust in authorities might act differently,” she said.

Abid Raja, the culture minister who is of Pakistani descent, has floated the idea of some immigrant groups getting priority for vaccines, after research suggested that people from India, Pakistan and Bangladesh are more likely to carry a gene that leads to more serious illness from Covid-19, although scientists do not believe this is the most important cause of different outcomes between ethnic groups.

Sweden, which now has one of the highest infection rates in Europe, is experiencing a similar situation.

People from Africa and the Middle East were seven more times likely to be admitted to hospital than native Swedes up until mid-February, according to the public health agency.

The most recent figures for those aged over 80 showed that while 91 per cent of those born in Sweden had been vaccinated, only 59 per cent of those from north Africa and 44 per cent from sub-Saharan Africa had got a jab.

Swedish regions, responsible for vaccinations, are working on reaching the immigrant groups as a priority, using different information channels than they normally use with native Swedes, according to Emma Sprak of the Swedish association of local authorities and regions.

Wisell added: “This is very concerning that they are a group that we have seen that has been greatly affected, especially in the early part of the pandemic. It’s important that [the regions] work very systematically and reach out to all groups in society.” 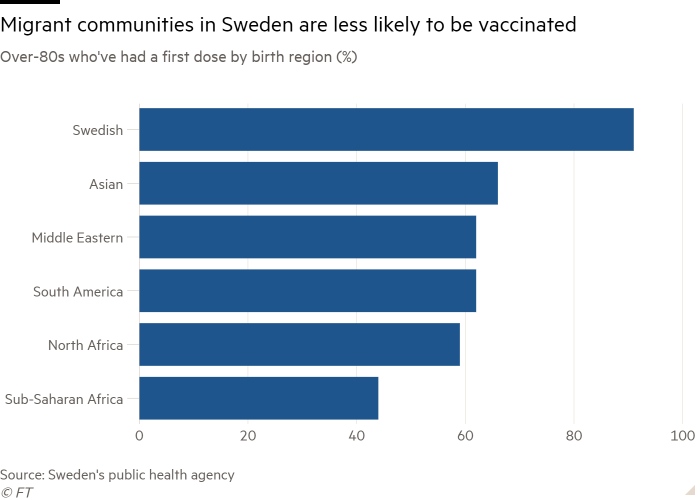 Gele said he was hopeful that just as a campaign inside the Somali community helped slow the very high number of infections during the first wave of Covid-19 last spring, so increased information should improve the situation with vaccines. Somalis like to receive information orally and from people they trust, he said, not authorities. Religious leaders have stressed that it is fine to take a vaccine during Ramadan.

Gele also believes that the statistics may have been skewed as some elderly Somalis registered as living in Norway may have left the country, preferring to return to their home nation before they die, and that in any case most of the population in Norway is young.

Vaccines had an “enforcing incentive” in that they offered Somalis the possibility perhaps to travel this summer, he said. “I’m very optimistic that it will push many people who were hesitant to take the vaccine.”