From subway stops to soup kitchens: the drive to vaccinate US holdouts

Every night since May last year, New York City subway stations have been closed so that an army of workers can disinfect the grimy platforms.

That might provide some reassurance to the thousands of New Yorkers who this week received their vaccine at a station operated by the state’s Metropolitan Transport Authority.

Pop-up jab sites on the subway are one way that US health officials are trying to reach the roughly 50 per cent of Americans who have not yet been vaccinated as the country’s once blistering inoculation campaign starts to lose steam.

“It’s convenient and it’s only one shot,” said Edie, a housekeeper who queued for a Johnson & Johnson jab at Penn Station on Thursday. “My friends have been bugging me to do it and they all signed up online but I didn’t have the patience for that.”

More than 1,100 New Yorkers received their vaccine at an MTA hub on Wednesday, all of whom were given a free 7-day MetroCard in exchange.

Mass vaccinations were all about home runs, they were flashy and we did them well. Now we have to keep the inning going

Freebies are on offer elsewhere in the US too: in Ohio, the state’s governor this week said residents who have been vaccinated will be entered into a lottery to win $1m.

The eye-catching initiatives are part of a broader drive that includes vaccine buses, clinics at churches and amusement parks, and door knocking campaigns, as the US strives to get closer to herd immunity so it can fully reopen.

Nearly half of the US population has received at least one vaccine dose, but with the rate of vaccinations slowing, attention is turning away from the mass immunisation effort and towards targeting specific hesitant or hard to reach communities.

Health experts believe that people who wanted to get vaccinated have already eagerly sought out jabs and that the second half of the vaccine effort must focus on the hesitant and “vaccine busy” — individuals who want to get immunised but have struggled to find time to go to a site. Groups who face language barriers and difficulties travelling to inoculation centres are also being targeted.

“In the beginning, the focus was on how you could do high volume vaccinations quickly,” said Céline Gounder, infectious diseases specialist and a member of Joe Biden’s former Covid-19 transition advisory group. “Now we’re pivoting towards . . . the people who are much harder to get to, [which] requires a much more tailored, hyperlocal, culturally appropriate response.”

Some mass vaccine sites are being wound down as the strategy turns to targeted campaigns and bringing jabs to people’s doorsteps.

John Chen, chief executive of Mascon Medical, which is running the Last Mile Vaccine Delivery programme in Massachusetts, has helped organise clinics where people can walk up and get vaccinated without preregistering. They are located in churches, soup kitchens, malls and food manufacturing plants across the state.

He compared the tactics he is using to canvassing voters in an election: “Flyers, texting, door knocking . . . it’s been unbelievably effective. 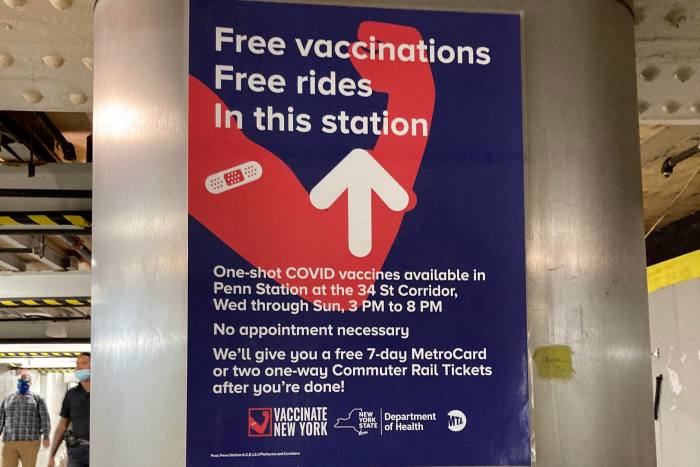 “Some people can’t even write their own name, some of them can’t get online and wouldn’t know how to sign up or don’t even have time to get to one of these mass vaccine locations,” Chen said.

To engage people from different backgrounds, health officials have recruited people from the communities they are trying to reach. Creole, Portuguese and Spanish-speaking translators had helped Chen’s programme vaccinate 20,000 people so far, he said.

Baltimore’s health department has also hired people from the communities that the city is looking to target, such as Latinos and African Americans. Connecting with unsure people is much easier when the person they are speaking to truly understands their concerns, said Letitia Dzirasa, health commissioner at the Baltimore City Health Department.

Last week, her group began knocking on doors in vulnerable areas in order to increase vaccine uptake. “We’re looking at areas in the city with the lowest vaccination coverage and highest case rate to really prioritise where we go first,” Dzirasa said.

On Wednesday, the Centers for Disease Control recommended the BioNTech/Pfizer vaccine for children aged 12-15, creating a new cohort of people in line to be immunised. 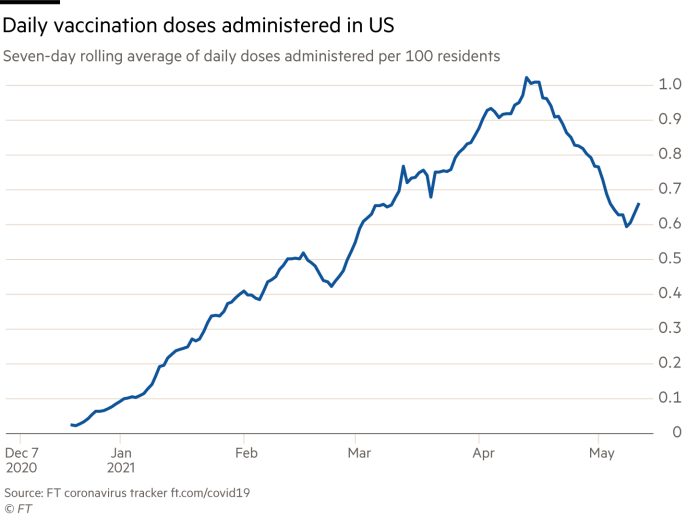 The Cove Island Marina and Lake Compounce theme park in Connecticut have hosted vaccine clinics set up by Community Health Center, a Connecticut-based non-profit healthcare provider, which plans to create temporary clinics at summer camps for children too.

Mark Masselli, chief executive of CHC, said they were targeting “the working poor population, who on the weekend catch some time to go to the beach, and the 25-45 age range, a group where Covid hasn’t had as big of an impact”.

In addition to the subway clinics, vaccine buses are touring New York to reach restaurant workers and delivery drivers. Both efforts offer the one-shot J&J vaccine so people do not have to return for a second jab.

“The healthcare agency . . . hadn’t understood our community at the time,” she said, adding that because few black Americans turned up to one temporary vaccine site at a church, they assumed that Muslims would be disengaged. “They lumped us all in together.” Hamida said she had knocked on doors, and been to mosque car parks, and restaurants speaking to Muslims and addressing their concerns around vaccination. “A lot of these people thought that it wasn’t for them,” she said. “We talked to people at the places where they live and eat and shop and invited them for halal tacos and helped them understand they’re in this with everyone else.”

Encouraging ethnic minorities and rural communities to get immunised will be crucial for Joe Biden to achieve his goal of vaccinating at least 70 per cent of American adults with one shot by July 4.

“Mass vaccinations were all about home runs, they were flashy and we did them well,” said Masselli. “Now we have to keep the inning going.”