The day trading bonanza that took Wall Street by storm early in 2021 has cooled sharply as US authorities lift social curbs and amateur investors spend more time away from home.

An army of have-a-go traders armed with no-cost trading apps propelled “meme” stocks to lofty heights in the first months of this year, in a move so vigorous it prompted a Congressional inquiry into core market issues like trade settlement, and the links between brokers and market makers.

But as large portions of the US economy begin to reopen, data have begun to signal a fading appetite for the same type of intense trading that triggered volatility in many shares in January and February.

“The rise was spectacular, but the fall has been equally spectacular,” said Steve Sosnick, chief strategist at Interactive Brokers. “The casual investor, or the investor who conflated gambling with investing, they’ve moved on to other things. More people are heading back to the office . . . and quite frankly investors have other things to do with their money.”

In US options markets, where traders place sometimes risky bets on movements in stocks and other assets, trading associated with retail investors compared with overall volume slid to a six-month low of 15.5 per cent in early May, from close to 20 per cent in January. In April, total trading volumes across the retail brokerage sector were down 26 per cent compared with March, according to a Piper Sandler analysis.

At the same time, the proportion of trades routed to market makers by the biggest retail brokerages, compared with overall US equity market volume, dropped 10 percentage points to 18 per cent between December and March, despite a fresh round of stimulus funds hitting American bank accounts at the latter portion of that period.

The slowdown in DIY trading marks a shift from earlier in the year when stocks like GameStop, which were hotly discussed on Reddit and other forums and were the subject of social media jokes, were sent surging higher by at-home investors. The moves were so strong that they inflicted heavy losses on hedge fund Melvin Capital, run by a protégé of well-known manager Steve Cohen. Congress has held numerous hearings over the episode.

The cooling in equity trading has coincided with a sharp rise in cryptocurrency activity, with volumes at major exchanges soaring to a record $1.7tn last month, according to CryptoCompare data compiled by The Block Crypto. However, analysts said a lack of granular data on crypto trading makes it difficult to determine the extent to which users of traditional retail trading platforms have shifted to digital assets. 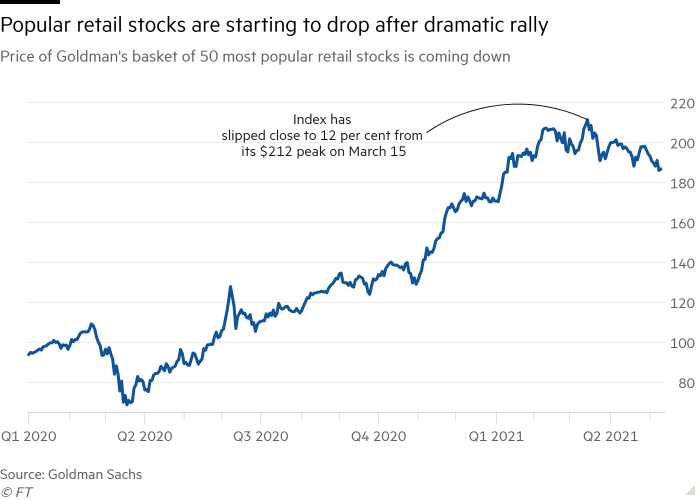 Stocks favoured by retail traders have lost traction in recent weeks. A Goldman Sachs basket of popular retail picks, which includes the likes of Tesla, Apple and Zoom, has slid more than 12 per cent off its March peak.

Speculative trading in higher-risk penny stocks, which trade outside of most national stock exchanges and are a bellwether for retail day trading activity, has plummeted since its February highs. Volumes on over-the-counter markets halved to 928bn shares traded in April compared with February highs, according to data from the Financial Industry Regulatory Authority.

Following severe market tumult early in 2020, equities have been on a mostly smooth path higher, and “that tends to be a time where you get more retail interest,” said Brian Nick, chief investment strategist at Nuveen. 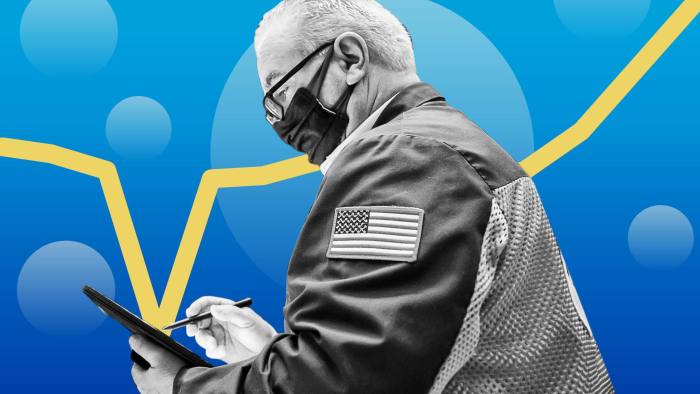 In a series of articles, the FT examines the exuberant start to 2021 across global financial markets

However, equities wobbled this week, with the Nasdaq Composite, an index heavy with tech names favoured by retail investors, sliding 2.6 per cent on Monday and another 2.7 per cent on Wednesday. The two days were among the benchmark’s worst this year.

The Nasdaq is now down about 6 per cent from the record high it reached on April 29, while the broader S&P 500 is off about 2 per cent from its May 7 peak. If these losses accelerate more substantially, investors could start getting hit with margin calls on trades that are amplified using leverage, said Randy Frederick, vice-president of trading and derivates at Charles Schwab. Brokers demand customers put up more collateral to backstop the trades and keep it open. But a sudden rush of calls can sometimes sharpen market falls as investors sell other assets to meet the broker’s request.

The level of margin debt in brokerage accounts almost doubled between March last year and this year, to an all-time-high, according to Finra data. The data do not differentiate between amateur and professional investors, but “retail traders . . . probably have a tendency to overextend themselves,” putting them potentially more at risk, said Frederick. 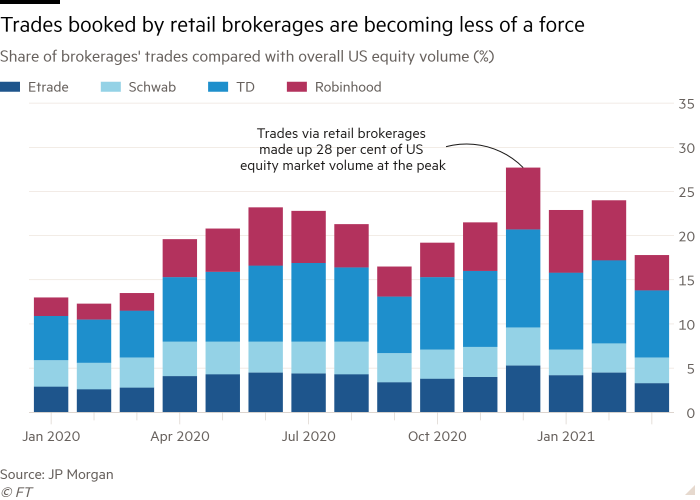 While the frenetic activity has eased off, volumes still remain elevated from a longer-term standpoint due in part to retail broker industry innovations, analysts said. One key element was a move by most US brokerages to drop commissions in late 2019, something that is credited with helping to fuel the rise in activity during the pandemic.

“As we saw during the pandemic, [retail investors] can be a big force,” said Katie Koch, co-head of fundamental equity at Goldman Sachs Asset Management. Post-pandemic, amateur trading “may not be at the same level of hyperactivity. But I expect the activity to remain elevated.”